Posted on November 27, 2015 by WNUR Sports Leave a comment 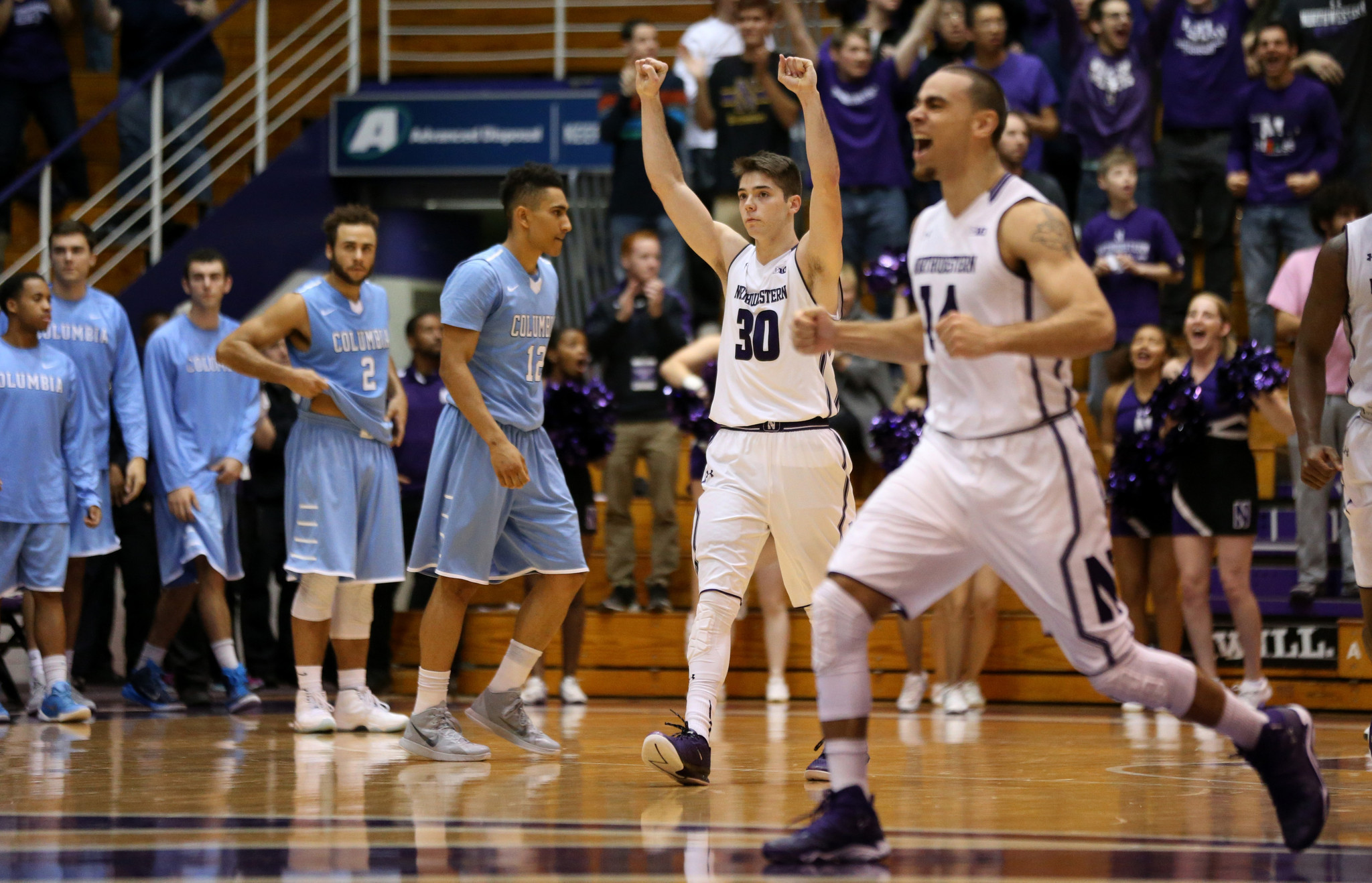 The Northwestern men’s basketball team finds itself 4-1 almost two weeks into non-conference play after holding out for a frantic, but surprisingly convincing 67-62 victory over Missouri in the consolation game of the CBE Showcase in Kansas City. Offensively, the Wildcats have shone far better than many supporters have expected, but defensively, where the ‘Cats are typically stronger, they have left a little to be desired. However, four wins in five games, including one against a tough, experienced Columbia team and another against a struggling but characteristically strong Missouri team are testaments to the way this team has fought. Individually, I’ll dive into grades for each player on the roster over this week-and-a-half long stretch.

McIntosh’s freshman campaign put him on the Big Ten’s radar, but so far in his sophomore season, he is starting to make a case for national recognition. Through four games, he is averaging 18 points (highlighted by a 32 point effort against Columbia on his 21st birthday), six assists (he set a career high against UNC with 9), and 1.4 steals per game. McIntosh has contributed significantly each game this season and has often been the anchor for a Northwestern offense that is averaging 75 points a game. Simply put, without McIntosh, this team would stand no chance in Big Ten play and wouldn’t be sitting at 4-1.

Despite shooting 28 percent through the first two games, Demps has rediscovered his stroke, firing at a 48 percent clip over the last three. Not to mention, he’s averaging nearly 39 minutes a game and even played the entirety of the overtime game against Columbia. In his final year as a Wildcat, Demps is shouldering whatever workload Coach Collins gives him, and though he overworked himself at first, he’s started to handle it with more comfort as the season progresses.

This grade might seem high for a guy who has only played 36 minutes, but I’ll be damned if Gavin Skelly doesn’t get credit for the minutes he has played. Coach Collins credited Skelly as the influential piece of the Columbia game, coming off the bench cold in the second half to convert a three-point play and throw down a ferocious slam to spark a Wildcats team that had lost its will before he came in. And in 17 minutes against Missouri, he put up seven points, three assists and two boards. With the performances Skelly has been putting in, it would be a travesty for Collins not to keep calling Skelly’s number.

Lumpkin is the best defender the ‘Cats have, and his size and athleticism are imperative when he closes down shooters on the wing. He started off the year with an impressive 12-rebound effort against UMass Lowell, and he contributes in a variety of categories each game. But Northwestern needs Lumpkin to fill the role of a lower-scoring Vic Law, so he needs to produce to a greater degree in each category. At 26 minutes a game, he logs the fourth most minutes on the team, so in addition to his solid defense, the ‘Cats need him to work for rebounds down low and distribute.

Speaking of players to fill Vic Law’s absence, Lindsey has done a nice job providing the scoring Law’s vacancy opened up. In just about 20 minutes, Lindsey is averaging a hair under six points a game and two assists to go with it. Against UNC, Lindsey put up a season-high 11 points, and against Missouri, Lindsey led the Wildcats with eight assists, proving his worth offensively. Aside from a poor showing against Columbia, Lindsey has been a solid contributor in each game, and though he is vastly undersized at the bottom of a 2-3 zone, his offensive game helps his grade.

Falzon came out gunning in his first outing as a Wildcat, pouring in a Northwestern freshman debut record 20 points while shooting 4-6 from beyond the arc against UMass Lowell. Against Fairfield, he put in another strong performance shooting 3-7 from distance, but has since gone cold, connecting on just three of his 18 field goal attempts since the Fairfield game. He has shown exactly what he can do when he finds his rhythm shooting the ball, but now that he is mired in a slump, you can see the pressure he puts on himself to will the ball in the net. If Collins can soothe Falzon’s psyche and help him regain his stroke from the first two games, Falzon will be a crucial supplementary scorer for the ‘Cats.

Olah’s 21 points and 12 rebounds against UMass Lowell in the season opener had Northwestern supporters teeming with optimism about his coming season. It seemed as if Olah’s upward trend would peak in his final year, but alas, after the first game, he returned to his frustrating form. His season averages aren’t necessarily bad, but the Wildcats need him to perform nearly every game, and the most agonizing part of it all is that each game we’ll be privy to a glimmer of what he can do. His first half against UNC was beautiful, going for 10 points and four rebounds, but in the ensuing 20 minutes, he failed to take another shot. Olah needs to be involved as often as possible, either scoring or corralling rebounds. As a captain, he needs to be one of the most consistent forces for Northwestern.

The 6’10” graduate student looks as if he is still getting accustomed to his new digs. Defensively, he needs to work on his court vision to see where the cutters are in front of him and on the baseline, and though he doesn’t log a ton of minutes a game, he needs to be a more active rebounder given his size. van Zegeren’s performance against Missouri Tuesday night was an encouraging sign of what he can do once he finds his comfort zone.

Taphorn needs to improve his defense if he wants to see more minutes. He’s shooting 38 percent from three-point range, which is actually the third best mark on the team behind McIntosh and Olah, but at the base of the 2-3 zone, he gets picked apart by penetrating passes along the baseline. Against Columbia, he gave up numerous buckets by not cutting off the passing lane down low, and it continued into the game against UNC, which led to him not playing against Missouri. Being a consistent marksman is important, but not if it’s at the expense of consistent easy buckets for opponents in the paint.

There are definitely things that Collins and his staff need to work on in terms of defensive marking systems and boxing out strategies, but a 4-1 record for this Wildcats team isn’t the product of the team being exceptionally talented. Collins has done a good job identifying which opposing players are going to be the biggest threats and preparing accordingly. A couple of tactical tweaks on the defensive side of the ball and Northwestern will look good going into conference play.