Posted on November 30, 2015 by WNUR Sports Leave a comment 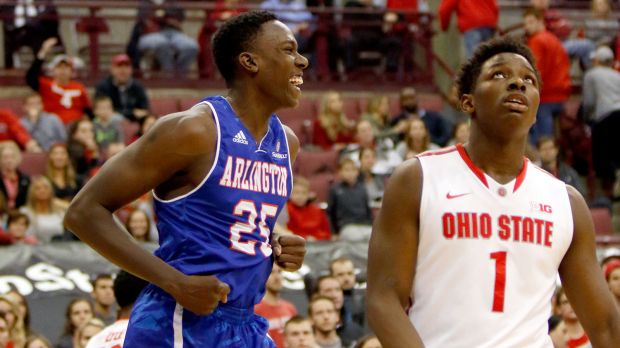 Texas-Arlington was happy and Ohio State wasn’t earlier this week in Columbus. See how this upset win by the Mavericks shook up Austin Miller’s Big Ten power rankings.

WNUR’s Austin Miller followed up his Thanksgiving Feast with a Big Ten men’s basketball recap. These rankings reflect all game action through Thursday, November 26. Check back every Friday for Miller’s new power poll.

What a week that was in the B1G Ten. Since last Friday, B1G teams have lost to UT-Arlington, Duquesne, Chattanooga, Louisiana Tech, and Radford. Gonna be a tight race for “One to be Ashamed of” this week. When they weren’t losing to terrible teams, this week also saw B1G squads head all over the country (and outside the country too, we see you Michigan in the Bahamas) to play in preseason tournaments. I’ve always loved preseason tournaments, mainly because coaches always look really awkward in team-issued polos, and playing basketball in a hotel ballroom, like they do at the Battle 4 Atlantis, is just plain fun. Next year Northwestern will head to New York City for the Legends Classic, and NYC sounds like a pretty cool place to spend a few days (just ask Rutgers).

Fam, it was a baaaad week for B1G basketball. Just 3 wins over Power 5 teams (as of Friday morning), and two of those were over Boston College and Missouri, both bad teams. This win won’t make Purdue’s resume, but it’ll be a nice win that could be an RPI top 50 win when all’s said and done, and this week, that’s better than most B1G teams can say.

Yes, Arlington went on to beat Memphis in their next game, but Ohio State losing home non-conference games is practically unheard of. Louisiana Tech, who Ohio State lost to after this UTA loss, defeated the Mavericks when the two sides played, making this one the worse of the two L’s taken by the Buckeyes. This Ohio State team may have the talent to fight back into the tournament discussion, but if they do, these last two losses may haunt them come Selection Sunday.

1. Michigan State: Not much of a question here. We’ll see how Sparty finishes in Anaheim (spoiler alert: they beat Providence and won the tournament), but far and away the most impressive team so far.

2. Maryland: Maryland played too close for comfort against both Rider and Illinois State, and while the Terps are still undefeated, those final scores were a bit too close for them to stay at number one.

3. Purdue: The Boilermakers got the aforementioned win against Florida in Uncasville Connecticut and are 5-0.

4. Michigan: It gets ugly fast… Michigan is 3-2 but comes in 4th because they have the best losses and looked solid blowing out Charlotte on Thanksgiving night.

hwestern: Northwestern, Nebraska, and Michigan are the only B1G teams that aren’t unbeaten but don’t have an ugly loss. Northwestern’s beaten a Power 5 team (Missouri) and Nebraska hasn’t (until Saturday, when the ‘Huskers beat Tennessee, so check back Friday to see if that win shifts the rankings), so the ‘Cats slide into 5th.

6. Nebraska: The Huskers have won when they’re supposed to, which is more than every other team below them can say.

7. Iowa: The Hawkeyes are somewhat out of the doghouse for that Augustana loss, but lost on the opening day in Orlando to Dayton. Not a terrible loss, but banishment to the loser’s bracket is never good. (Although their next game is against Notre Dame who lost to Monmouth (!!!!) in the first round) (And the Hawkeyes lost to Notre Dame before BLOWING OUT Wichita State…check back Friday to see what Austin does with this bi-polar basketball bunch.)

8. Wisconsin: The Western Illinois loss still hurts, but beating VCU is a decent result, even if losing to Georgetown isn’t ideal.

9. Indiana: Wake Forest was picked to finish last in the ACC, but might not be awful. Nevertheless, that loss coupled with a loss to UNLV makes it not a great trip to Hawaii. #FireTomCrean

10. Minnesota: The Gophers may have lost to a bad Texas Tech team, but at least Joey King can do that okie doke shamgod crossover so hard you’ll cry.

12. Rutgers: And you thought Rutgers wouldn’t ever be better than last!! Yes, the Scarlet Knights lost to both Creighton and Clemson, but those are actual basketball teams!! That’s enough for 12th in my book.

13. Penn State: I know this is a bold statement by me, but I think losing by 26 to Duquesne isn’t good.

14. Illinois: The Illini followed up their loss to Chattanooga by needing a buzzer beater to beat Chicago State. Welcome to the bottom. (BUT WAIT: The Illini got Kendrick Nunn back and hung with Iowa State later this weekend. Will it be a short stay in the 14 position for John Groce’s squad?)