Posted on December 11, 2015 by WNUR Sports Leave a comment 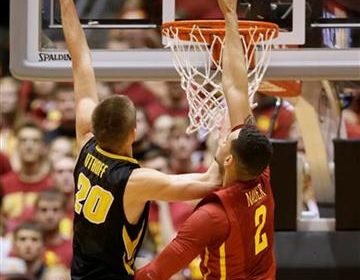 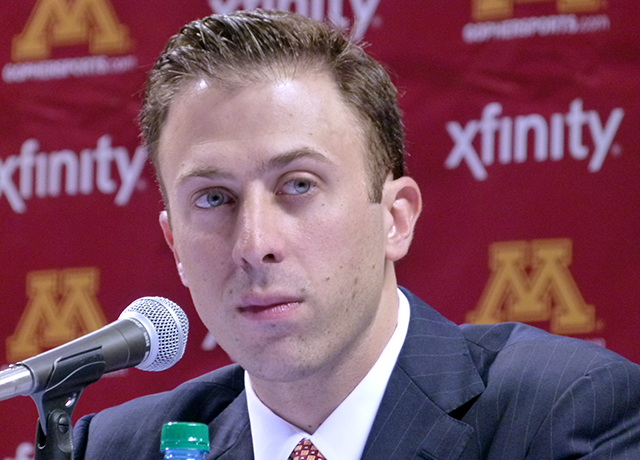 After back-to-back losses to South Dakota and South Dakota State, there’s little for Richard Pitino to smile about at Minnesota. Jana Freiband/ MinnPost

Minnesota, we need to talk. Your basketball team is bad, and it shouldn’t be, and it’s pretty frustrating. While Northwestern students were studying for and most certainly acing their finals, Minnesota was losing to very, very bad basketball teams. Granted, they’re not the worst team in the B1G, as that title will be handed out after a hotly contested fight between dueling dumpster fires in the Sixth Borough and Happy Valley. But here’s the thing: Penn State and Rutgers should be bad. They’re schools with little to no basketball history, and below-average facilities. Minnesota, on the other hand, shouldn’t! Richard Pitino is an adequate coach at worst, above average at best, and Minnesota has the tradition and gameday experience to rival most middle tier B1G teams. Readers of this column know I’m a big fan of Joey King and his impressive repertoire of offensive moves (it gets bigger and bigger every week it seems), but other than him, okay, to be fair, even including him, this Minnesota team is bad. Really bad. No B1G school (even Penn State or Rutgers) should ever, under any circumstances, lose to South Dakota and South Dakota State back-to-back. That’s just embarrassing. It’s bad in the Twin Cities, and it doesn’t look like it’ll get better. Get your act together, Gophers.

One to Be Proud Of: Maryland 76, Connecticut 66

Iowa was all set to get their name in this column, holding a 20 point lead in the second half on the road against Iowa State. A win for the Hawkeyes in Ames would have been the single best win for a Big Ten team this year, but alas, the Cyclones had other plans and we’re stuck settling for this dud of a game. Maryland beating UConn isn’t something to write home about:  the Huskies aren’t a great team, but this being the best win of the week is more an indictment of the rest of the B1G. With schools coming in and out of finals weeks, most Big Ten sides chose to play very bad teams (some of them even lost to those bad teams, but more on that later). Overall, this is a decent win for the Terps, but it won’t make or break their tournament resume by any means. 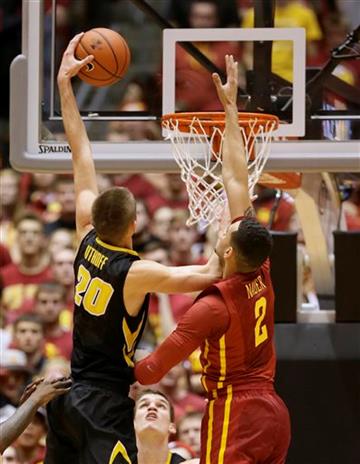 The Hawkeyes couldn’t pull off the upset in Ames, but they get an honorable-mention photo of Jarrod Uthoff throwing down against the Cyclones. Uthoff scored 30 in the first half and Iowa still lost. Photo credit: Charlie Neibergall, AP.

One to Be Ashamed Of: UW-Milwaukee 68, Wisconsin 67

Minnesota lost to two teams from South Dakota, but the Gophers were upstaged on the “derp” scale by Wisconsin losing yet another home game to inferior competition. The Badgers led by as many as 15 in the first half, but Panthers coach Rob Jeter, who played under Bo Ryan at Division III Platteville, led his side back into the game, and Bronson Koeing missed a 3 that could have won the game for the Badgers. Credit to Nigel Hayes for dropping 32 points, but shame on the Badgers for yet another black mark on their tournament resume.

1. Michigan State: Another week at the top for the Spartans, who tore through Binghamton and Maryland Eastern Shore (tough competition), and now set up for a potentially tough matchup with Florida Saturday.

2. Purdue: The Boilers struggled with New Mexico but are still unbeaten, and should stay that way until a showdown with Butler on December 19th in Indianapolis.

3. Maryland: Maryland is a really talented bunch, and will almost surely compete with Michigan State for the conference title.

4. Northwestern: With just one loss, Northwestern is deserving of this fourth place ranking, even if they are a bit underqualified with no great wins.

5. Iowa: The Hawkeyes let a golden opportunity slip away against their in-state rivals last night, wasting a 30 point half from Jared Uthoff. More like Io_a amirite?

6. Indiana: I was probably a bit too harsh last week in ranking the Hoosiers 10th. Two wins over Morehead State (who might actually be decent) and IPFW have things back on track in Bloomington or so it seems. #FireTomCream still though.

7. Michigan: The Wolverines got mauled by SMU, but are a talented side, and might end up being the 5th best team in the conference when it’s all said and done.

8. Nebraska: Oh boy it gets bad fast in the B1G. Nebraska still doesn’t have a bad loss, so that’s enough to slot them into 8th, but man is the B1G bad.

9. Wisconsin: The Badgers’ win at Syracuse and a nice looking home win against Temple offset at least somewhat the horrendously bad losses to Milwaukee and Western Illinois.

10. Ohio State: Ohio State beat VMI and and Air Force this week, so I think it’s safe to say that Thad Matta doesn’t support are troop’s.

11. Illinois: A rare week where the Fighting Illini didn’t lose! The boys in orange were slightly comfortable in defeating Western Carolina, and snuck by Ivy League powerhouses Yale.

12. Penn State: The Lions lost to George Washington and defeated Eastern Michigan and Canisius this week. In related news, Penn State is not a good basketball team.

13. Rutgers: They’ll be partying in the Sixth Borough after seeing their Scarlet Knights move up a spot! It’s not often a 29 point loss to Seton Hall is enough to move a team up in the rankings, but that’s how bad Minnesota’s week was.

14. Minnesota: As mentioned multiple times, Minnesota lost to both South Dakota and South Dakota State at home in the last seven days. The good news in Gopherland is that Joey King wears that headwrap so well that you’ll cry so hard it forms the 10,001st lake.