Posted on January 6, 2016 by Michael Stern Leave a comment 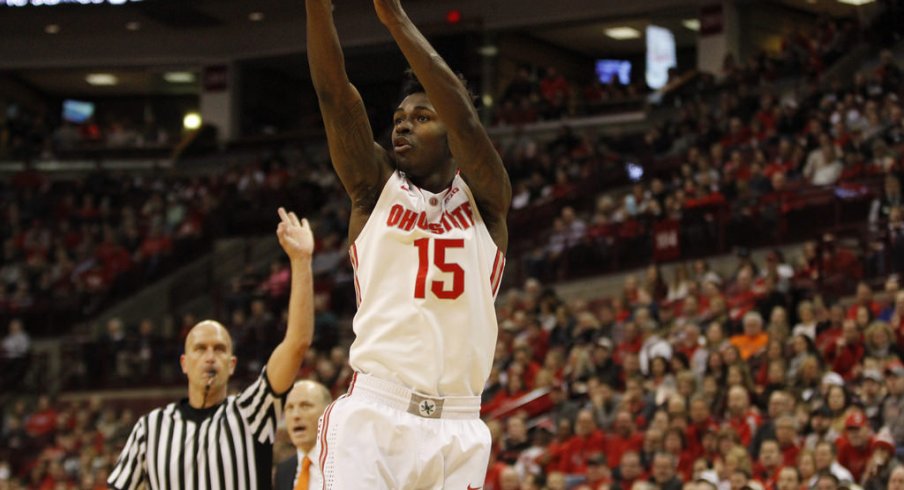 Offense was hard to find Wednesday night at Welsh-Ryan Arena, as Ohio State and Northwestern shot a combined 37 percent from the floor.

Northwestern led 27-26 at halftime and 36-34 early in the second half when Williams hit back-to-back threes to give Ohio State a 40-36 lead.

While Williams flourished from beyond the arc, the Wildcats struggled from distance for the second consecutive game. After going 2-for-20 Saturday against Maryland, Northwestern went 6-for-25 against the Buckeyes.

NU did make a couple of clutch threes late in the second half, first from Bryant McIntosh to tie the game at 44, then from Aaron Falzon to trim the Buckeye lead to 51-50 with six minutes left, but Ohio State responded both times.

“That’s where you gotta win or lose the game and I thought Ohio State from that point on really outplayed us on both ends,” Wildcat coach Chris Collins said of the Buckeye’s game-sealing spurt.

The game was sluggish at the outset, as the teams combined for more fouls (13) than made field goals (12) in the opening 12 minutes. Marc Loving’s transition dunk punctuated an 11-2 run which also included a pair of Williams triples and gave Ohio State a 26-17 lead with four minutes left in the first half.

Northwestern quickly rallied, scoring the final ten points of the first half to take the lead into the locker room. The Wildcat run consisted of two acrobatic interior baskets from Gavin Skelly, and two corner threes, one each from Tre Demps and Nathan Taphorn.

NU held its largest lead of the game early in the second half, when Joey Van Zegren completed a three-point play to extend the team’s lead to four.

Van Zegren, a graduate transfer from Virginia Tech, tallied seven points and three rebounds. He matched up primarily with Ohio State’s Trevor Thompson, who also began his career in Blacksburg.

Van Zegren picked up his fourth foul with 11 minutes remaining and did not return to the game, and Thompson took advantage of Van Zegren’s absence. Thompson, who scored six of his 12 points while Van Zegren sat late in the second half, finished with a team-high ten rebounds.

After the game, Collins explained the effect of Olah’s absence on the team’s offensive production. “It’s hard to loosen a defense when you can’t drop the ball into the post,” Collins said.

Northwestern certainly struggled to loosen the Buckeye defense. The Wildcats’ 56 points were a season-low, and key perimeter payers McIntosh, Falzon, and Tre Demps combined to shoot 11-for-43 from the field, 1-for-7 during Ohio State’s 13-3 run.

McIntosh described the shooting slump as “a mental thing.” before continuing, “Maybe we just need to get more reps or something.”

McIntosh, who played the first 39 minutes, also said Ohio State’s physicality played a role in wearing him down over the course of the game.

McIntosh and Demps, who played 35 minutes, are two of four Big Ten players who average more than 35 minutes per game (Wisconsin’s Nigel Hayes and Bronson Koenig are the others).

The Wildcats may be tired, but Collins knows the team must rebound Saturday against Minnesota.

“You gotta stop the bleeding,” he said. “You can’t have those extended losing streaks.”

Last season, Northwestern won its first conference game before losing its next ten. This year’s ‘Cats have dropped two straight after winning their league opener, but face a struggling Gopher team Saturday at the Barn (1:30, WNUR). Minnesota has lost its first three Big Ten games of the season, and has dropped nine of its last 11 games against league foes.