Posted on January 12, 2016 by Michael Stern Leave a comment 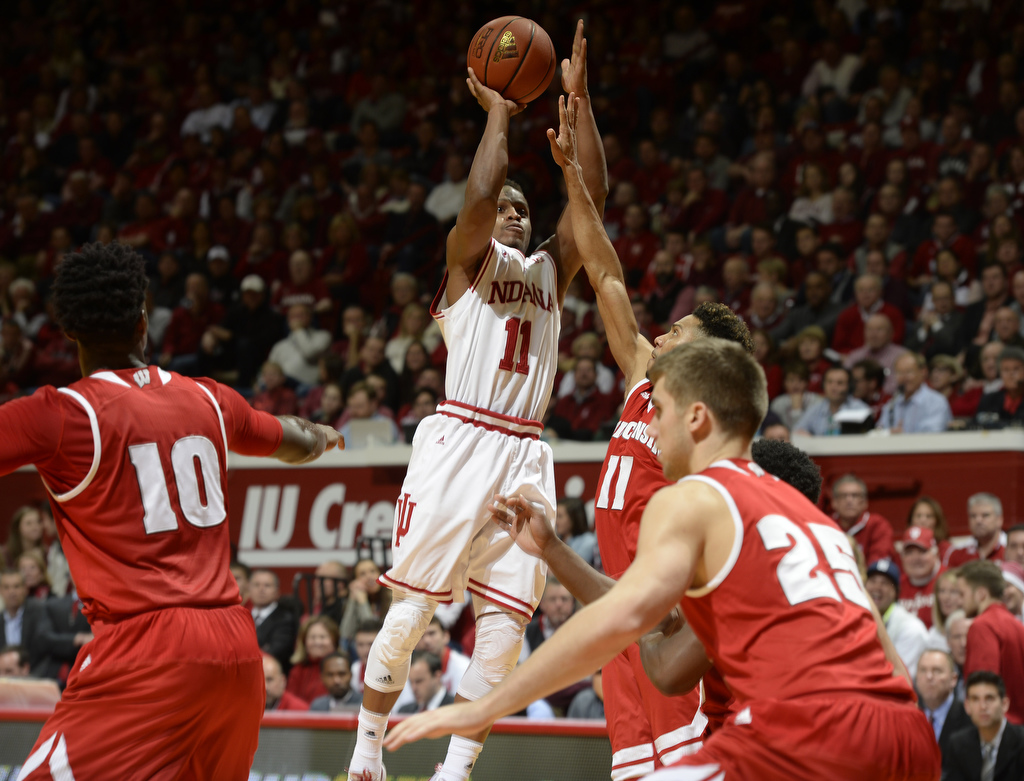 Yogi Ferrell and the Hoosiers are rolling right now, while their in-state rivals have stumbled a bit. Photo Credit: Chris Howell/Herald-Times

Michael Stern returns to WNUR’s Tuesday lineup, but instead of a thermometer, he’s channeling the stock market.

This first week will be focused on general trends of the first fortnight of conference play, but after this the column will get more specific on a week-to-week basis. If you have a great couple of games (as a team or individually), then expect to be in the “Buy” column. If you don’t, you could be headed for the “Sell” side of the matrix.

1. Indiana: The Hoosiers’ stock remains relatively low, and they’re still unranked after starting the year 5-3. That said, coach Crean’s group has rattled off nine wins in a row to get to 14-3, and started 4-0 in conference play. With scorer James Blackmon, Jr. out for the season, IU will need to evolve offensively, but Robert Johnson has stepped up against the two toughest opponents of the nine-game streak (17 points against Notre Dame and 11 against Ohio State). Thus far, the men with the candy-cane pants are third in the conference in scoring margin (behind only Maryland and Michigan State), and a 25-point TKO of the Buckeyes certainly helps that number. If the Hoosiers can take better care of the basketball (they’re 11th in the conference in turnover margin), they could exceed their KenPom-projected 13-5 conference record.

2. Michigan’s Three-Point Shooting: The Wolverines are off to a 2-1 start in conference play (that Purdue loss isn’t looking great) thanks in large part to their long-range attack. Blue is shooting a conference-best 46 percent from downtown, and has multiple knockdown shooters on the roster. All of Michigan’s top five points-per-game scorers have taken at least 45 triples this season, and four of them (Caris LaVert, Aubrey Dawkins, Duncan Robinson, and Derrick Walton, Jr.) are shooting at least 44% from distance. Robinson, a transfer from Williams College, leads in attempts (97) AND percentage (56%), while Zak Irvin has been in a season-long slump (25%) but has started conference play 6-of-14. If Michigan keeps making triples, they could upset Maryland tonight at home and eventually beat their Pomeroy-projected 11-7 conference mark.

3. Andrew White III: Haven’t heard of White? I can’t blame you, but you should. His Nebraska Cornhuskers may be off to a 1-3 start in conference play, but that hasn’t slowed this Kansas transfer down. His offensive numbers are eye-popping through four conference games: he’s sixth in the conference at 52% from long range, and his true shooting percentage is 72%, good for second in the B1G. White opened conference play with a valiant five-triple, 22-point effort in defeat against Northwestern, then slowed down against Iowa and Indiana before dominating Rutgers, scoring 28 on 11-of-14 shooting. White should be an all-league selection if he keeps this up.

1. Purdue: Conference play has been rough on the Boilermakers. Sure, they showed up at home against Michigan, but they’ve also lost at Illinois, survived in Madison, and lost to Iowa at home. The Boilers are ninth in scoring margin (behind Nebraska and Northwestern) and dead last in turnover margin. Purdue clearly has three talented big men, but the Boilermakers’ guards must step up for the team to match their Pomeroy-projected 12-6 conference record.

2. Northwestern’s Three-Point Shooting: If you lead the conference in long-distance attempts, but are 13th in the conference in three-point percentage, that’s a bad sign. NU has taken 93 triples in four conference games, and is shooting only 31% as a team from beyond the arc. The slide’s major culprits are the team’s most frequent shooters. Bryant McIntosh has opened conference play 3-of-17 from distance, and Tre Demps is not much better at 6-of-26. Long range efforts of the bench have been good (Scottie Lindsey is 5-of-12 and Aaron Falzon is 11-of-24), but if the Wildcats can’t get their starting backcourt going from deep, it could be a long league season in Evanston.

3. Ohio State’s Free-Throw Shooting: The Buckeyes started 3-0 in league before getting embarrassed by Indiana, but warning signs for a potentially extended slide are in place. While Ohio State leads the conference with 98 free throw attempts, the Buckeyes are 13th in the league at 63% from the line. Jae’Sean Tate (47%) and Daniel Giddens (41%) are major culprits, but primary ball-handler JaQuan Lyle (61%) hasn’t been great either. You don’t need me to tell you that foul shots are a must-have in tight games, and if the Buckeyes don’t warm up soon from the charity stripe, it could be a tough conference season in Columbus.