Posted on January 19, 2016 by Michael Stern Leave a comment 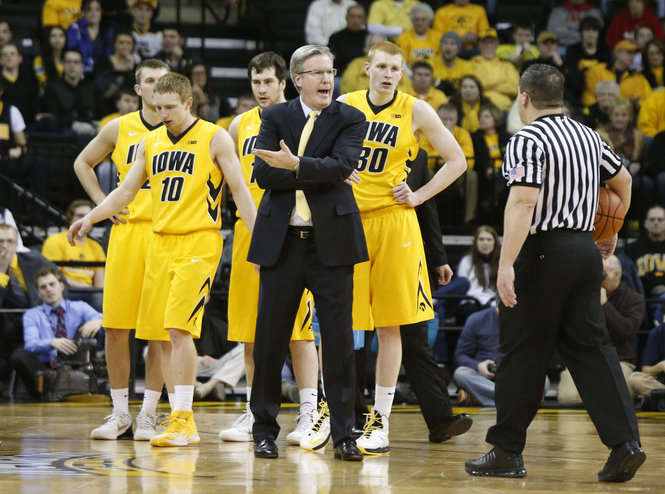 It’s time for the second edition of buy/sell, in which Michael Stern gives three teams/players/stats who are trending up and another three that are trending down.

1. Iowa (especially Dom Uhl): The Hawkeyes are clearly for real after knocking off full-strength Michigan State in East Lansing and then beating a tough Michigan team at home three days later. Jarrod Uthoff has replaced Aaron White as head Hawkeye, Mike Gesell and Adam Woodbury are playing the best basketball of their seemingly never-ending careers, and Peter Jok is shooting the lights out. The biggest change for the Hawkeyes, however, has been the emergence of Uhl, who scored 20 points on 8-for-11 shooting in 37 minutes this week. Uhl and the rest of the Hawkeye bench were ineffective in close early-season losses to Dayton and Notre Dame, which explains why Iowa coach Fran McCaffery played his bench only 28 minutes in the Iowa State blown lead fiasco. Uhl, a sophomore from Germany, is shooting a ridiculous 9-for-11 from downtown in conference play, and when he cools down freshman sharpshooter Nicholas Baer (46% from three this season) can help him carry the Hawkeye bench.

2. JaQuan Lyle: Sure, I called out Lyle and his Buckeye teammates for poor free-throw shooting last week, and yes, Maryland dropped three digits on Thad Matta’s crew over the weekend, but Lyle turned in one of the best stat lines of the season in a mid-week game against Rutgers. The freshman dropped a casual 16 point, 12 rebound, 11 assist triple-double against the Scarlet Knights, and he leads the Big Ten with a 49% assist rate in conference play (Bryant McIntosh is second at 49.5%, but this is a spot for Lyle love). He needs to work on his outside shot (he’s 16-of-63 from deep this season), but that assist rate (even after falling back to the mean) should compare favorably to DeAngelo Russell’s 33% from a season ago.

3. Bronson Koenig and Nigel Hayes: How does a 9-9 team beat a top-five team despite getting only two bench points? Koenig and Hayes provided the answer, combining for 52 points on 15-for-29 shooting to lead the Badgers over the Spartans. It’s remarkable that the two remaining starter’s from last season’s Badger team have continued to play well despite extended minutes. Hayes ranks second in the conference, having played 89% of the Badgers’ league minutes, while Koenig’s 87.6% participation rate ranks third. Northwestern’s Tre Demps leads the conference with a whopping 90.2% of minutes played, and McIntosh ranks fifth at 85.9%, but this buy pertains solely to the Badger duo.

1. Michigan State’s Other Guys: Spartans not named Denzel Valentine shot 1-for-13 from three in a mid-week loss to Iowa, then got in lots of foul trouble in Madison to overshadow a strong game from Matt Costello. Spartan coach Tom Izzo clearly isn’t satisfied with his rotation yet, having used 13 players against both the Hawkeyes and the Badgers. Michigan State needs a couple of viable scoring options to develop alongside Valentine, Costello, and sharpshooter Bryn Forbes. Perhaps one, Tum Tum Narin, will emerge after he returns from injury, but a second (a more efficient Eron Harris or talented youngster Deyonta Davis) must show up soon, as the Spartans face Maryland Saturday.

2. Indiana’s Turnovers: Yeah, I’m still buying Indiana as a whole, but the Hoosiers have to take better care of the basketball. Five triples from Nick Zeisloft bailed out the candy-canes over the weekend against Minnesota, but freshmen Thomas Bryant (five made field goals, four turnovers) and Robert Johnson (zero made field goals, three turnovers) lead a group of sloppy ball-handlers in Bloomington. Indiana has turned the ball over 23 percent of the time in conference play, dead last in the Big Ten. Indiana has another couple of weeks to clean up their act, but the Hoosiers better be in tip-top shape at season’s end, as they play five of their last seven games against ranked teams.

3. Minnesota. It’s been a tough year for the Gophers, who have started 0-6 in league play and 6-12 overall. Joey King is definitely a bright spot with his 47% three-point shooting and skilled dribbling moves, but as a whole the Gophers have been disappointing. In conference play, Minnesota is shooting 43% from the floor (good for 13th in the Big Ten) and Gopher opponents are shooting a league-high 58% from the field. Perhaps more troubling, after Minnesota’s regular-season win total fell from 20 in coach Richard Pitino’s first year to 18 in his second season, the Gophers will need to win their last 12 conference games to avoid second straight win decline under Pitino.