Posted on January 19, 2016 by Austin Miller Leave a comment 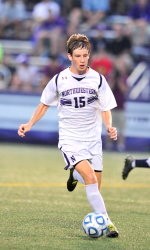 With the No. 64 pick in @MLS #SuperDraft, @PhilaUnion select midfielder Cole Missimo from Northwestern University!

Missimo was a Second Team All-Big Ten selection in both his senior and junior years with the ‘Cats, and scored a total of 7 goals in his time with Northwestern, while also adding 12 assists in 76 career appearances.

Missimo enters a crowded midfield picture for the Union, which includes former American international Maurice Edu, as well as Frenchmen Sébastian Le Toux and Vincent Nogueira, and recently acquired Swiss international Tranquillo Barnetta. Also in the picture is 21-year old American Zach Pfeffer, who is highly rated by both club and country.

The most likely next step for Missimo is to spend time with Bethlehem Steel FC, the USL-affiliate of the Union. If Missimo is able to impress in what is the 3rd level on the US Soccer Pyramid, he could earn a call up with the Union first team.