Posted on January 24, 2016 by WNUR Sports Leave a comment 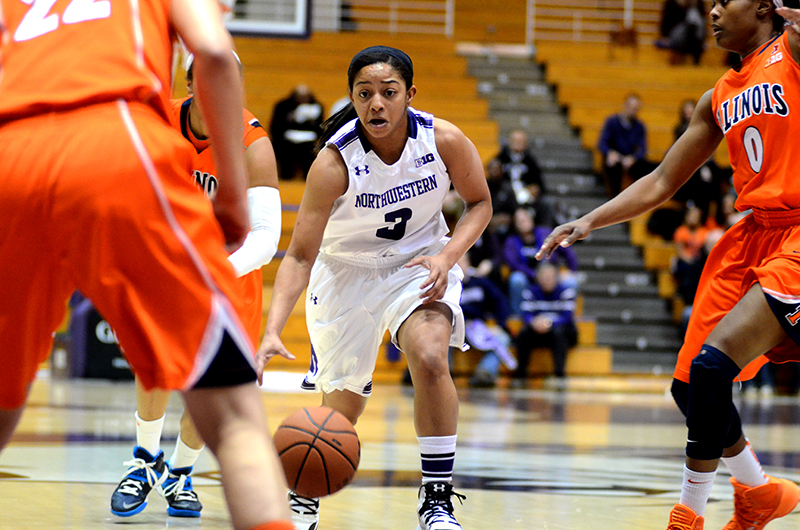 Despite holding the lead against the visiting Indiana Hoosiers heading into the home stretch, the Northwestern Wildcats couldn’t overcome a 33-point scoring effort by Indiana in the fourth quarter, and lost for the third time in a row on Sunday afternoon, 91 – 84.

The game was back and forth for much of the first half, as the teams traded buckets and left a lot to be desired defensively.  Indiana’s leading scorer Tyra Buss struggled early, but contributed consistently in the second half to lead her team to victory.

“Unfortunately Indiana had the last run that we couldn’t stop,” said head coach Joe McKeown.  “That was the difference in the game really.”

“I’m finding my rhythm in Big Ten play,” said Deary.  “Today was just all-in for me and for the team.”

The two teams traded the lead often in the second half.  Deary paced the offense, shooting 61 percent from the field to keep the game within reach.

A late third quarter run by Northwestern seemed to put a comfortable lead on the board, but the Hoosiers couldn’t be stopped in the last minutes of the game.  Buss overcame her early shooting struggles to finish with 21 points for Indiana, now 4-4 in Big Ten play.

“I think we just broke down defensively,” said Deary.  “We weren’t communicating in transition. I don’t think Tyra Buss challenges us defensively.”

Northwestern gave up 90-plus points for the second consecutive game after giving up 95 to Minnesota in Minneapolis last Wednesday.

“We will bounce back.  We are a resilient team,” said McKeown.  “We have to clean up our defense, because we will find ways to score.”

Northwestern drops to 2 – 6 in the Big Ten and the schedule does not look to get any easier, with a trip to Columbus to face an Ohio State team ranked in the top-10 coming on Thursday.  With 10 conference games remaining, the Wildcats will need to pick up some checks in the win column in order to help their postseason hopes.

“If we aspire to make a run in the second half of the Big Ten, we have to defend,” said McKeown.

Northwestern beat the previously fifth-ranked Buckeyes on Jan. 14 86-82. A second win over the Buckeyes would be not only a great resume-building win, but also potentially keep NCAA tournament dreams alive.

Northwestern returns to Evanston next Sunday for a mid-day clash with Iowa.  Both games can be heard live on WNUR Sports.