Posted on February 4, 2016 by Ryan Fish Leave a comment 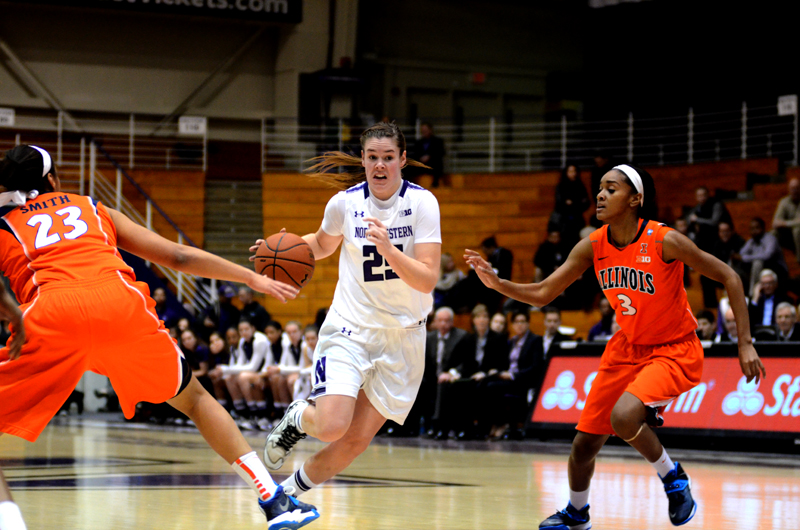 Losers of five straight and owning a 2-8 conference record, Northwestern women’s basketball faces a pivotal game Thursday night in Champaign. The Wildcats (13-9, 2-8) take on another struggling squad in the Illinois Fighting Illini (8-13, 1-9), with a chance to win for the first time since an upset over No. 5 Ohio State on Jan. 14.

A victory would push Joe McKeown’s squad in the right direction with tougher opponents in Minnesota, Rutgers and Maryland next up on the schedule. Conversely, a loss to the Big Ten’s worst team would further damage the team’s already dwindling postseason hopes.

This is Northwestern’s first and only matchup against the Illini this season. The ‘Cats went 2-0 against their in-state rivals in 2015, but certainly a different team will take the floor on Thursday. The 2016 Wildcats have not only struggled in Big Ten play, but also on the road in general. Northwestern has yet to record a road conference win, and the team hasn’t won on the road at all since Dec. 13 at Loyola.

Northwestern is also desperately searching for more consistent options off the bench. McKeown’s starters, particularly the team’s “Core Four” of Ashley Deary, Christen Inman, Nia Coffey and Maggie Lyon, have played the vast majority of the minutes so far in conference play. That could be a reason why the team appears tired and defensively porous at the end of games, blowing recent fourth quarter leads against Minnesota, Indiana and Ohio State.

Illinois comes into the game on a four-game losing streak, but showed signs of life against No. 7 Ohio State in its last game. The Illini remained within three points of the Buckeyes in the final minutes, but came up short in an 80-70 loss. This season’s leading scorer, sophomore center Chatrice White, had 26 points and 10 rebounds. Forward Alex Wittinger also had a double-double (13 points and 10 boards), while guard Brooke Kissinger scored 15 off the bench.

Those are three players the Wildcats should keep an eye on defensively, but the six-foot-three White is the most dangerous. White has 192 more field goal attempts (386) and 74 more rebounds (208) than the next highest Illinois player, so interior defense and controlling the glass will be key for Northwestern. That means that Coffey, Pallas Kunaiyi-Akpanah and the taller bench players (Allie Tuttle or Christen Johnson) will need to be on their game.

If the ‘Cats can limit White offensively, close-out on shooters, and play better in the final minutes than they have in recent games, they should be able to bounce back against one of the conference’s weakest teams. That being said, Northwestern has already played down to its competition this season and has struggled on the road, so the Wildcats will still have to earn their way back into the win column.

The game tips at 7 p.m. central, with pre-game coverage beginning at 6:45 on WNUR Sports. You can tune in online or at 89.3 FM in Chicago and Evanston.