People Are Upset about the Scoreboard at Rocky Miller Park

Posted on February 8, 2016 by Erik Bremer Leave a comment

College baseball season is just a few days away.  The Northwestern Wildcats will begin the Spencer Allen era on February 19 with a doubleheader against Nevada in Mesa, Arizona, before opening their home slate on March 30 when they host Chicago State. And there’s reason for excitement beyond the hope that always comes with a new spring, as the home opener will mark the completion of the new Rocky and Berenice Miller Park.

As anyone who spent any time at the old Rocky Miller Park knows, the renovation was long overdue.  Fans entering through the gates in March will be greeted with the brand-new Paul Stevens Plaza, a new seating bowl and press box, and a state-of-the-art LED scoreboard.

But in a shocking turn of events, the residents living around the Northwestern campus are upset.  I know what you’re thinking … there’s no way a group of people that has kept the brothel law on the books, made sure Evanston was a dry city until 1972, files noise complaints every Dillo Day and recently restricted tobacco and lighter sales to people under the age of 21 would object to needed improvements at a baseball park.  You’d be wrong.  While most of Northwestern’s issues have been with the city of Evanston, The Daily Northwestern says that this time it’s the village of Wilmette to the north:

Wilmette village manager Tim Frenzer said residents had voiced concern about the potential for a large sign to distract traffic on Isabella Street.

Yes, Isabella Street, the two-lane street that doesn’t have enough traffic to warrant painted lanes and used to have a Purple Line stop until the CTA closed it down due to low ridership, is prone to rubbernecking on weekend afternoons.

Leading the crusade against the nearly-completed renovations is Wilmette resident Laurel Sheffer, who has lived in the area for 25 years. More, from the Daily North Shore:

Sheffer said that the previous scoreboard was about half the size of the new one proposed by Northwestern and not LED lighted with a video. “It was just a plain old-fashioned scoreboard,” she said.

Well, yes, Laurel, that’s why they’re putting in a new one.  The old scoreboard was older than me, was difficult to see, featured about ten dead lightbulbs, and was controlled by something that looked like a Commodore 64. 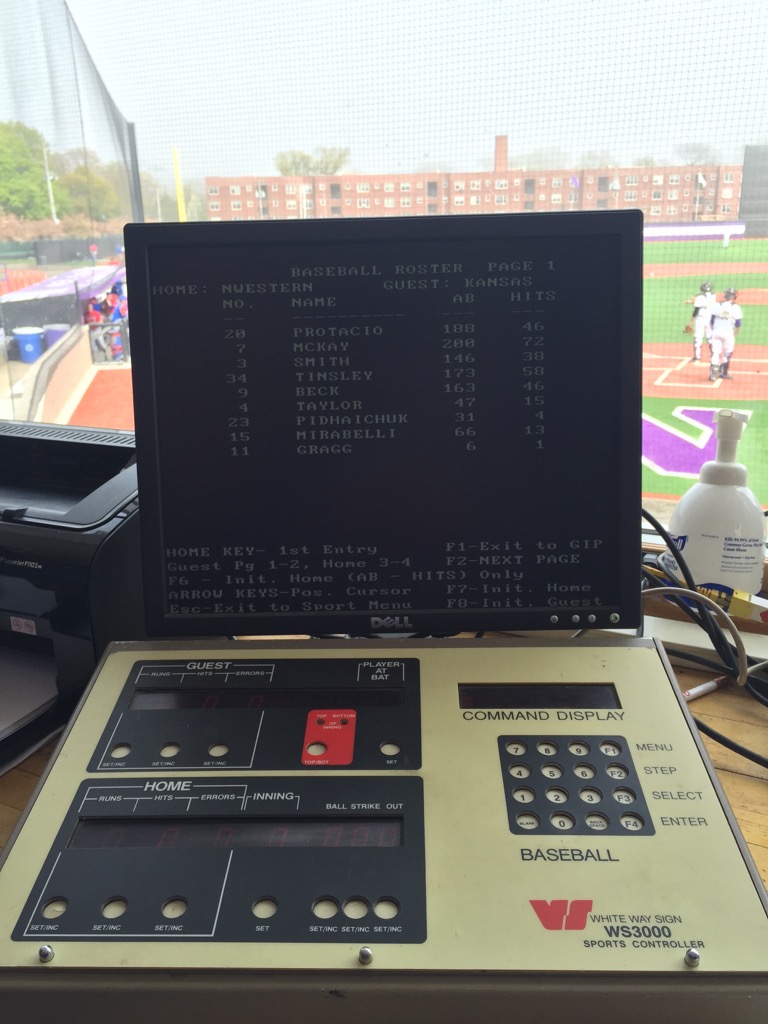 The primary concern of Sheffer and others is the new scoreboard’s impact on their views from their houses.  And that’s a reasonable concern, in theory.  But here’s the view of Rocky Miller Park from 4th street, where Laurel Sheffer lives, according to Daily North Shore. (Photos taken via Google Maps) 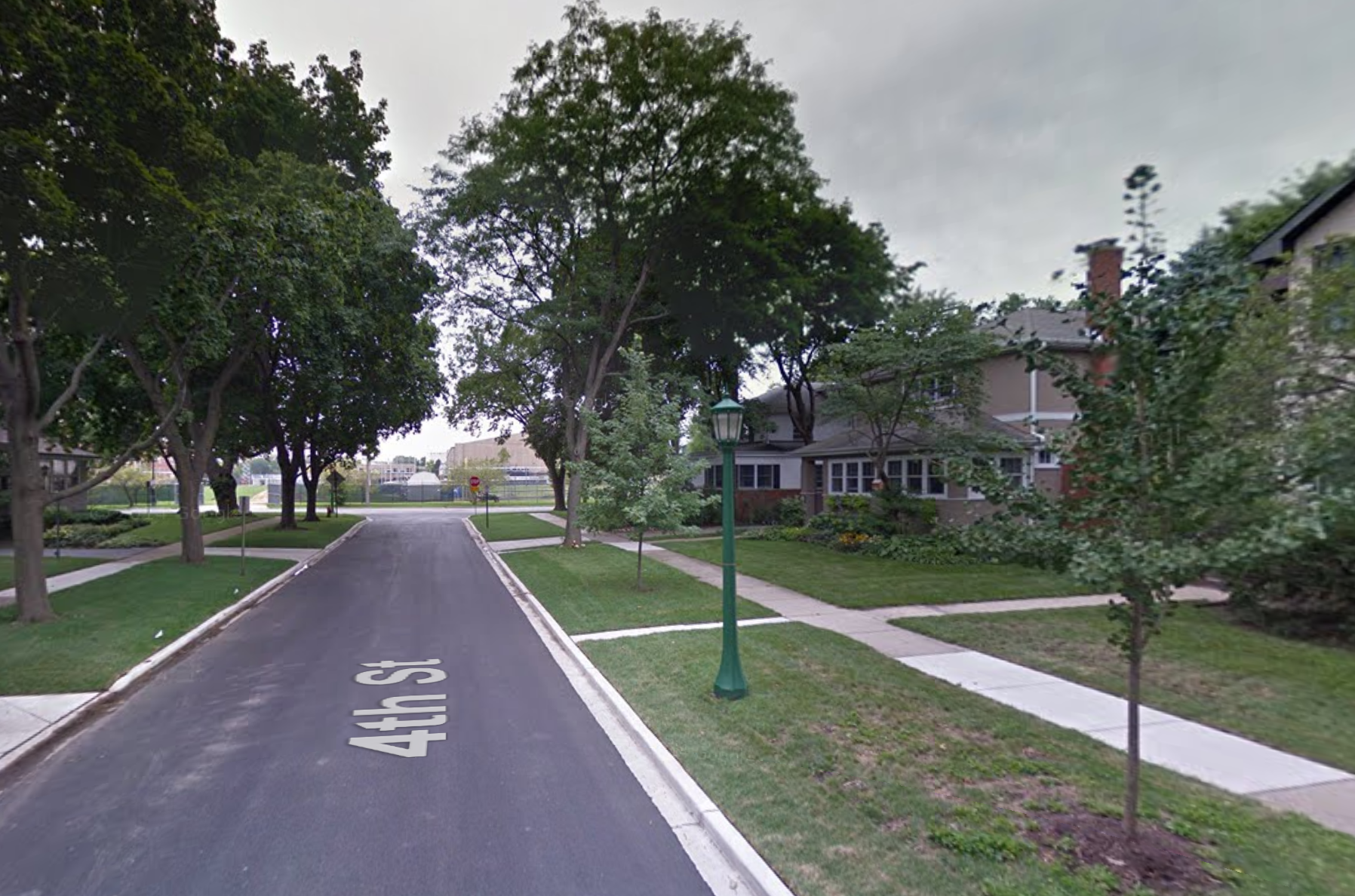 Let’s enhance, with an arrow for added emphasis: 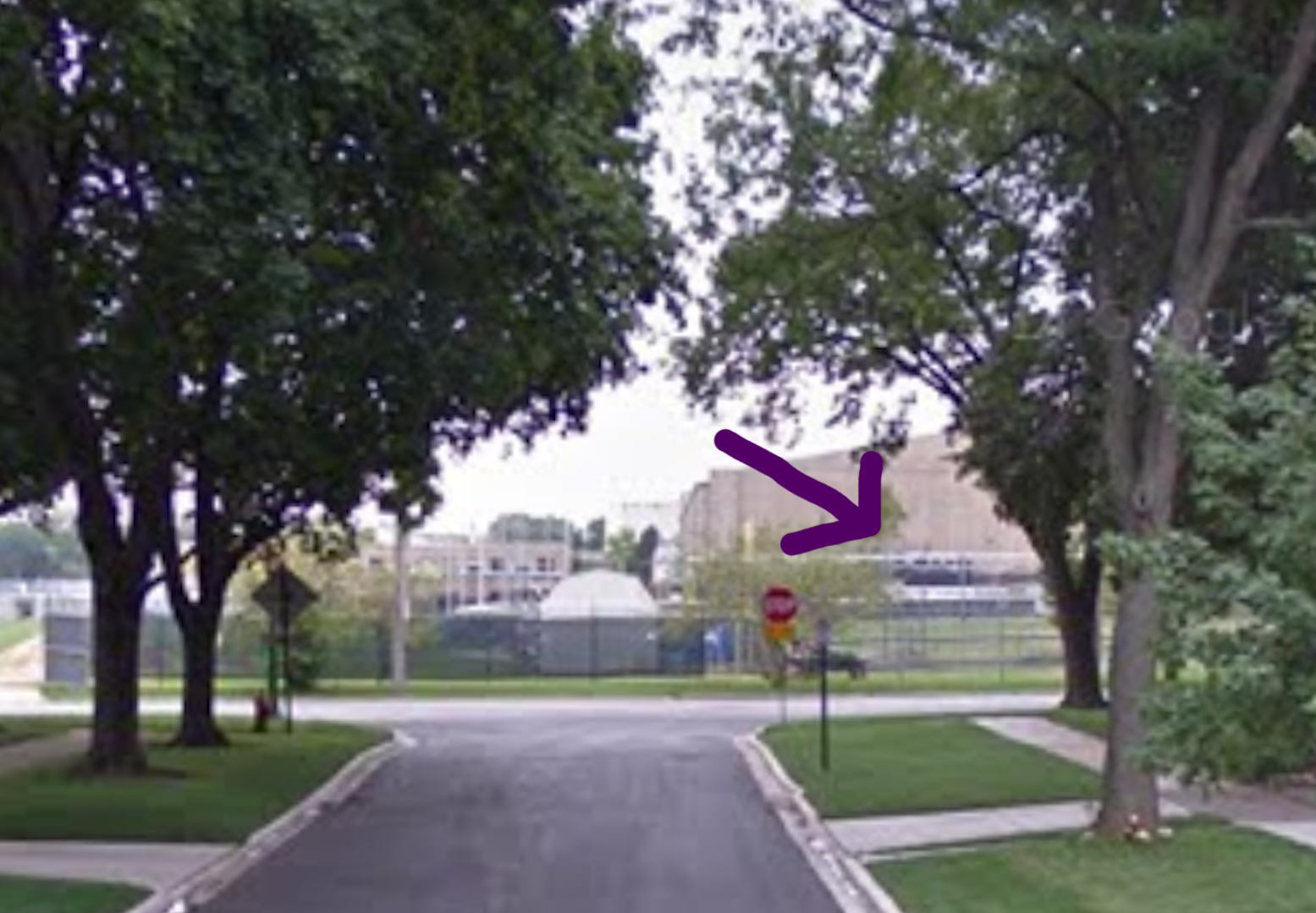 Now, with a rendering of Laurel Sheffer’s vision of the new scoreboard: 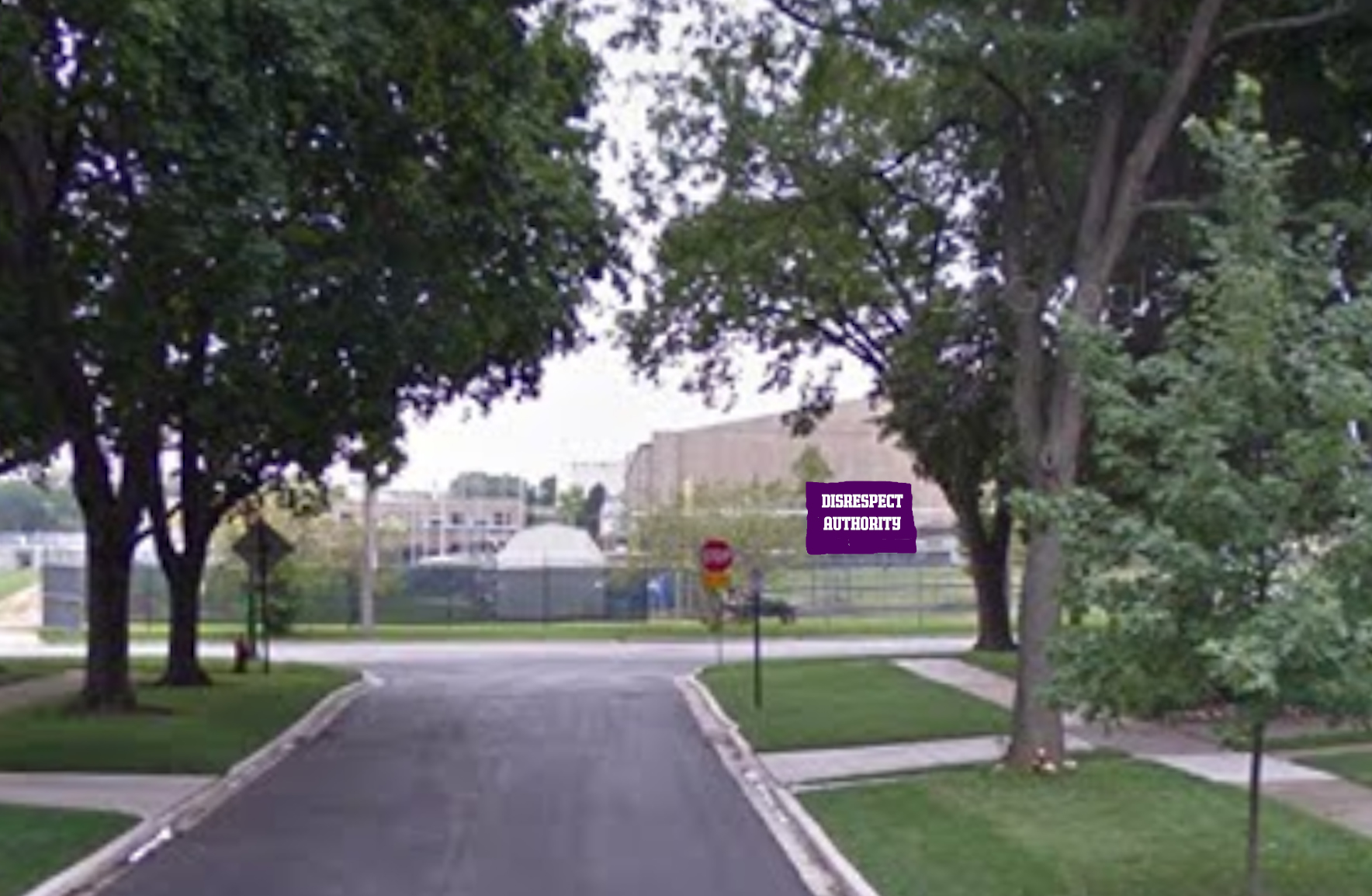 According to the Chicago Tribune, residents have also complained that the renovations will lower their property values.

An excerpt from my spec screenplay “The Monsters are Due on Isabella Street”: 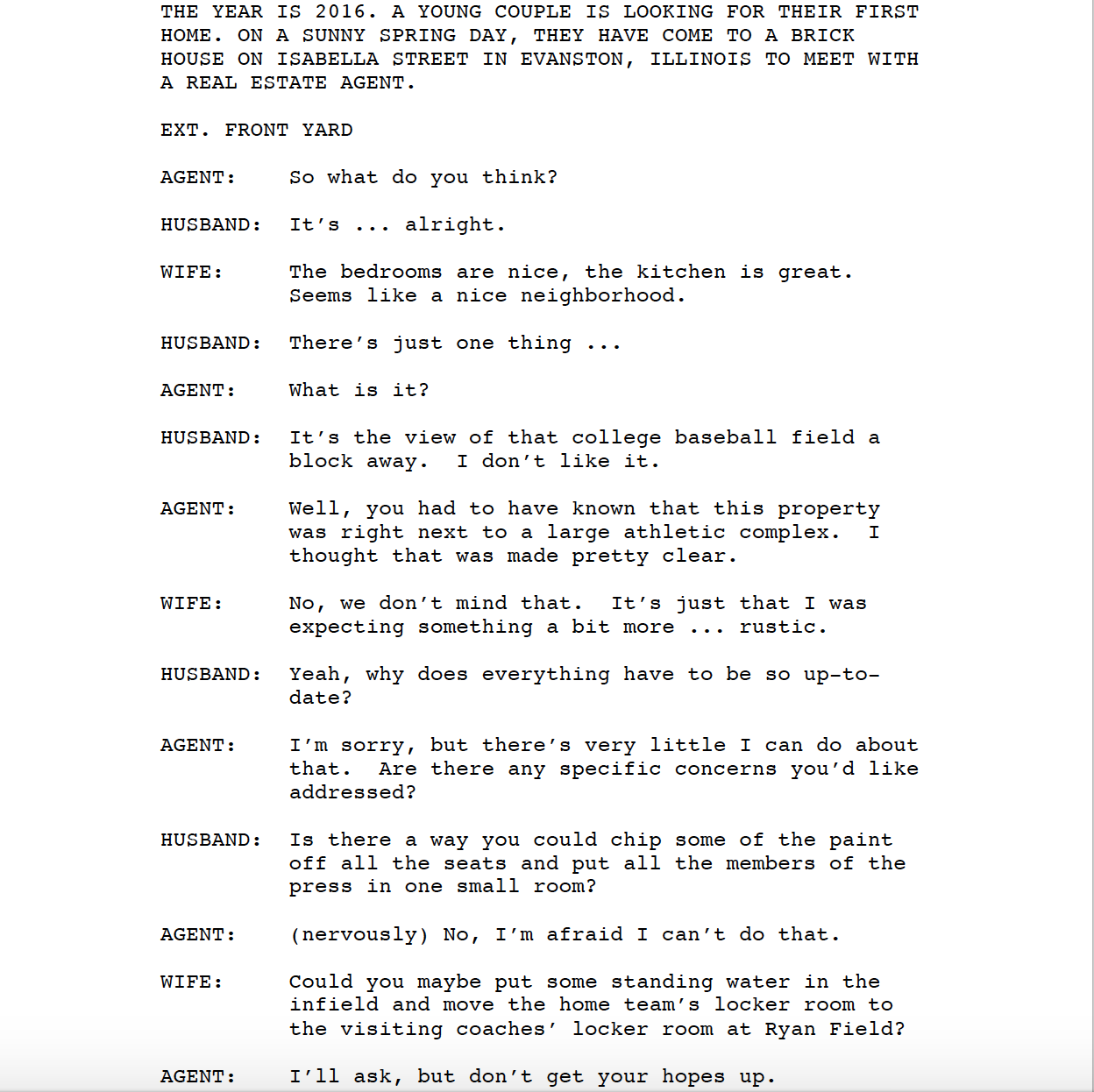 Wilmette resident Celene Peurye-Hissong, apparently unaware that she was arguing against herself, was quoted in the Chicago Tribune arguing that “it’s going to be on four to five hours per game for 18 games between March and the end of April” as if that would elicit tears of sympathy from readers.

According to the Tribune, the Evanston zoning board presented conditions to Northwestern regarding use of the scoreboard in order to diminish the atrocity of the new screen.  Among them:

I’d like to say WNUR Sports will keep you updated as this story unfolds, but I think we all have better things to do.  We’ll see you at the home opener.