Posted on February 8, 2016 by Ben Goren Leave a comment 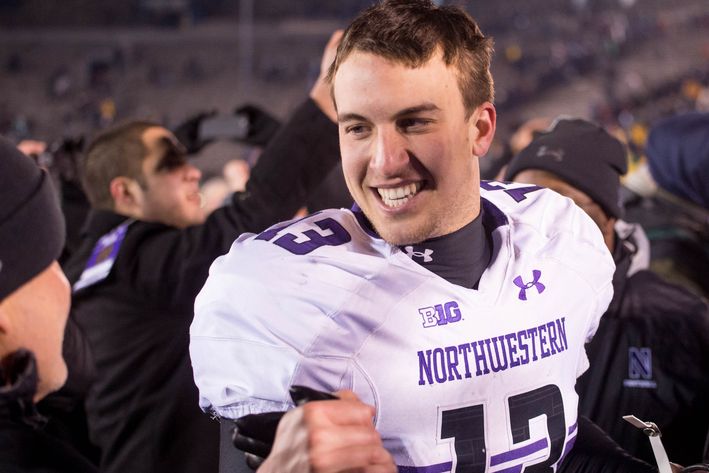 There is no asterisk there. There are no “yeah buts” that need to be given out.

And how freaking cool is that?

This is Northwestern. There are 8 Wildcats in the NFL. For reference, Ohio State had 14 guys drafted in one year in 2004.  They have 35 in the league right now.  Shoot, Rutger has 20 NFL players in the league.  Trevor Siemian is Chicago’s Big Ten Team’s NFL Quarterback, and in no way, shape, or form should that be taken as anything but the highest compliment.  So, so, so few Wildcats, heck, so few college athletes anywhere go on to have success at the next level. So when Trevor Siemian, he of the Gator Bowl win, the Notre Dame game, the Syracuse comeback, and yes, the Michigan slip, beats out Zac Dysert for a third string spot, something exactly 0 people not named Siemian envisioned happening, you best believe I’m going to be stoked.

It is fun to root for people who repped your school in college at the next level.

Did Trevor Siemian strip Cam Newton? No. Did he throw a touchdown pass to clinch a playoff game? He did not. But ask anyone who’s ever played on any team ever, and they’ll tell you the same thing: every single player matters. Every single player can make a difference. It doesn’t have to be on gameday. They don’t have to dress for every game. Trevor Siemian, by all accounts, did his job this year and did it well. He’ll get his Super Bowl ring and he’ll wear it proudly, and as fans of his, Northwestern fans should be proud of that ring too.

We might joke about what it’d be like if Trevor Siemian had the reins of the Bronco offense. We might even make an entire series out of that hypothetical. We might make posts detailing the ins and outs of Trevor Siemian’s lone snap this year, a kneel down at the end of the first half against Pittsburgh. The more cynical of us may ask how a Super Bowl champion couldn’t throw for double-digit touchdowns his senior year in Evanston.

But the reason why we care so much about how Trevor Siemian does in the NFL has nothing to with cynicism. It’s because he is one of us, a Northwestern Wildcat, who is sitting on top of the world.

He’s winning. And by extension so are we. And that is what being a fan is about.