Posted on February 13, 2016 by Tara Wendell Leave a comment 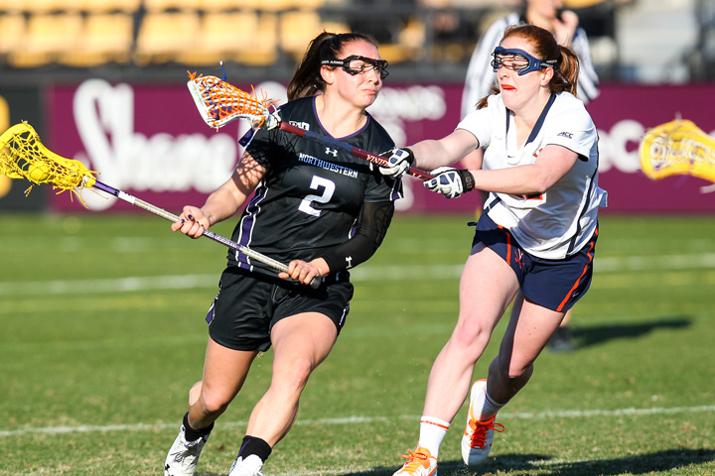 For the third year in a row, the #4 Wildcats will face the #10 Virginia Cavaliers in the Cobb County Classic, a neutral site game hosted by Kennesaw State University in Kennesaw, Georgia, a small lacrosse hotbed without a big-name team of its own. Northwestern won last year, and has won nine of the last ten matchups against the Cavaliers.

The ‘Cats also gave up seven free-position shots against the Blue Devils and were 1-3 on their own free position shots.

However, those issues are pretty small. The ground ball margin is nearly even, and NU did win the draw control battle, which did not happen in seven of the ‘Cats’ games last year. Allowing the opponent seven free positions isn’t bad, and converting them is hard, especially if the two free positions Northwestern didn’t convert from were from bad angles.

Northwestern got some key performances against Duke, and can only hope for encores against the Cavaliers. Freshman goalie Mallory Weise had an enormous start for the Wildcats, saving eight of 16 shots sent her way, and coach Kelly Amonte-Hiller can only hope she keeps showing up like she did last week. NU also only turned the ball over eight times last week–they’d like the number to be closer to five (or, well, zero), but eight’s a great place to start. The team also played strong defense, causing seven turnovers.

Selena Lasota, as always, should keep scoring, and Kaleigh Craig is the clear second option on the offensive end, with two goals in 13 of her last 14 games, including two at Duke.  Sheila Nesselbush scored three goals on four shots, and her teammates should always be looking to her when she cuts toward the net. She also picked up four draw controls and caused a turnover–she truly is an ideal midfielder.

If all those pieces come together like they did last week, the ‘Cats can expect a victory on Saturday against UVA. They probably will come together, but crazier things have happened (see NU’s losses to Stony Brook and Penn State last year) and this team has yet to prove they’re more consistent than last year’s.