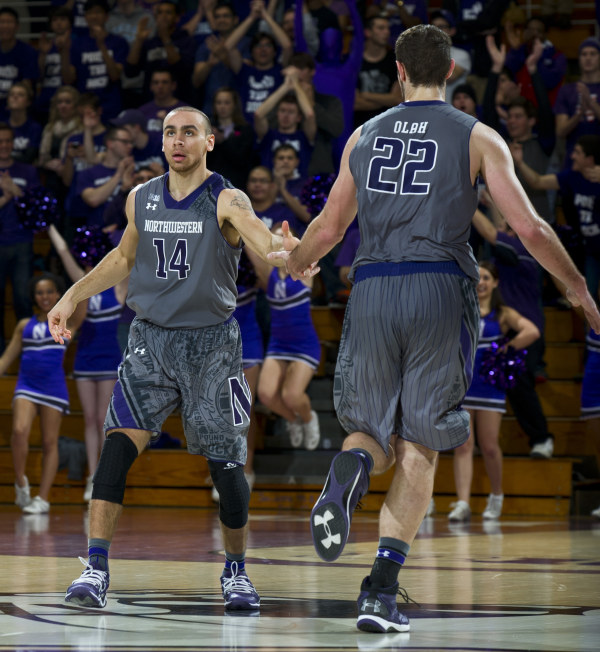 Tre Demps is made of human fire.

Once it hit winning time, he turned on the gas, hitting 4 straight triples to push Northwestern’s lead to 5 at the 5-minute mark. Maybe one of them resembled what a normal human being would describe as an open look. He’s still Northwestern’s best scorer and he is so much fun to watch. He also won Northwestern this game.

Both teams failed to break 25 points in the first half, but in half number two, both teams exploded. Illinois got contributions from Jalen Coleman-Lands and Kendrick Nunn who combined to hit 7 triples and Khalid Lewis even hit an outside shot. Northwestern had the answer in the form of Scottie Lindsey.

Lindsey is a mercurial scorer who can get scalding hot in a matter of seconds. He was the microwave tonight, finishing with 18 points off the bench.  What has so often been the bugaboo with Lindsey is his defensive game. That was not an issue tonight. He swatted a dude so hard off the backboard it ricocheted out past the three-point arc. He was everywhere and had his best day as a Wildcat.

Illinois had a chance to win it at the end, but Malcolm Hill fell trying to spin and the clock hit zeroes.

Here are some thoughts:

NU was able to exploit mismatches down low

Illinois’ frontcourt is, how do you say it, not exceedingly good. The loss of Mike Thorne Jr. has left the center spot to be manned by Maverick Morgan and Michael Finke, neither of whom could slow down Alex Olah.  Morgan finished with 10 points and 7 rebounds and it would’ve been significantly better if he could’ve gotten a couple of bunnies to fall.

Everyone expected Dererk Pardon to have a big game, but the freshman showed he’s still pretty raw.  He picked up two first half fouls in less than 1:30 of playing time and would pick up his third by the end of the first stanza.  He never was able to get a toe-hold into a game that he could’ve dominated.  His issues with setting illegal screens need to be worked out.

Northwestern is still very much a guard oriented team, as Alex Olah still looks a little hampered by his foot injury.  But it is comforting that against a team so undermanned up the middle, Northwestern could attack with some post looks.

This zone is going to give up open threes

This defense will not wake up overnight and run teams off the three-point arc. It just won’t happen.

Illinois had plenty of open looks from deep. Kendrick Nunn might have struggled to get his shot to go down, but Jalen Coleman-Lands did not. Northwestern is going to have a lot of trouble against a team like Michigan, who are due up in a few games.  It seems that Northwestern is willing to allow open threes as long as they can cut off penetration. Illinois shot 24 threes and hit 9.  A couple of open looks rattle home for the Fighting Illini and it could’ve been a very different story.

What the zone did do is take away easy Illinois buckets.  No Illinois guards could get from the three-point line to the rack.  That’s a plus for Northwestern, but you could certainly be excused for being uncomfortable with the way NU’s defensive strategy looks.

Foul shooting is a real issue

Northwestern came in shooting under 65% from the stripe.

They went 5-10 from the stripe tonight.

That is bad and frustrating at it makes closing out games hard.

So…how about that NIT?

20 wins and “Big Ten” denoting what conference you’re in does not a NIT resume make. Northwestern absolutely needed to get a win today to avoid putting themselves in a very unenviable position for the stretch run.

KenPom has Northwestern’s non-conference schedule as 346th out of 351. Their RPI coming in was 111th. Playing the team KenPom tabs as the 127th best in the country does little to move the needle. But by virtue of winning games against the bottom-dwellers of their schedule, NU could tally up a lot of wins. The question is if they’re good enough.

Northwestern is very much up against the wall.  A win in Mackey or Crisler might be necessary for Northwestern to punch its ticket.

It’ll be a white-knuckle ride to the close.