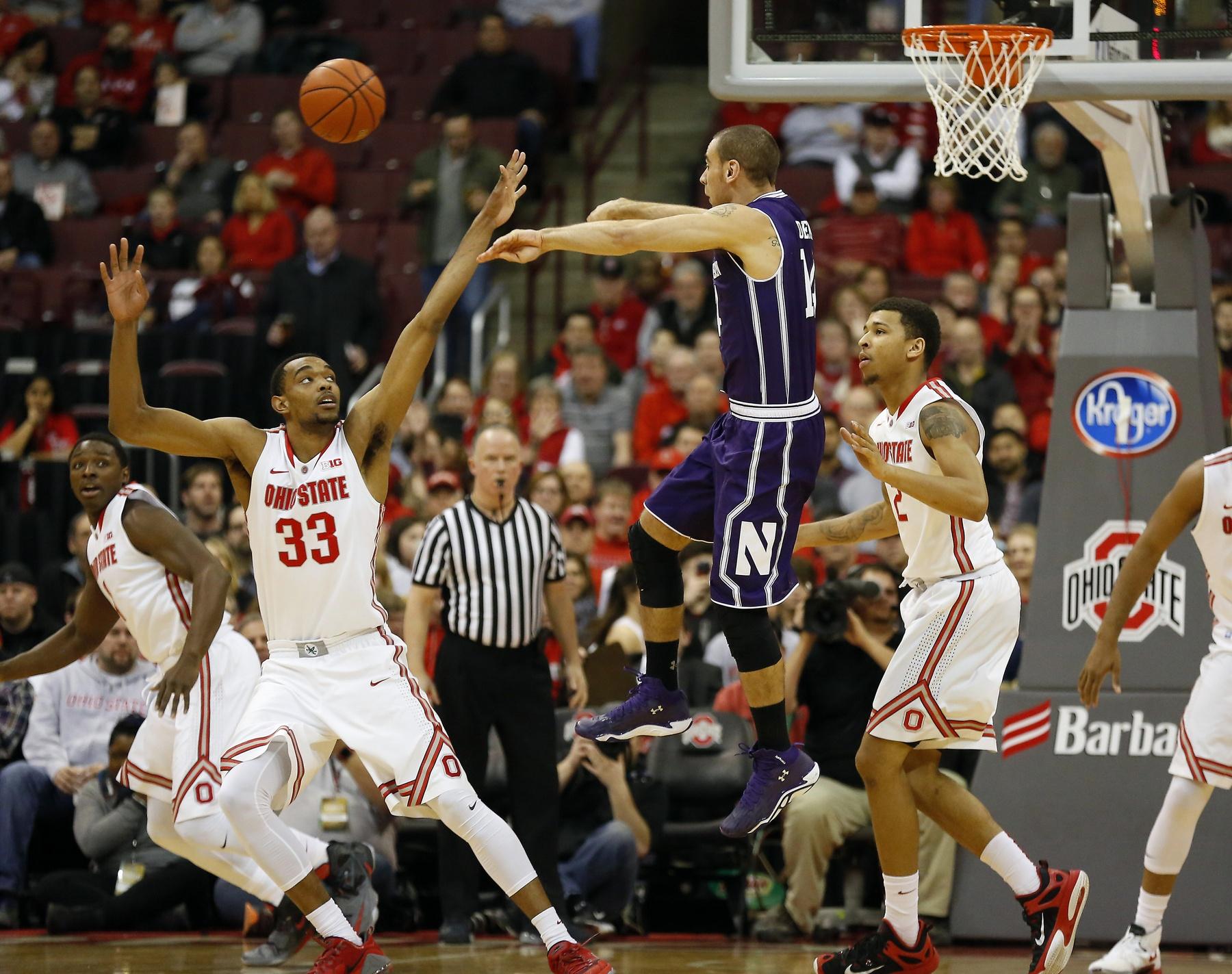 It was another week of encouraging signs but largely disappointing results for Northwestern basketball. The men’s team watched a second-half lead and a potentially important victory slip away in Columbus, but was able to hold on for a close home victory over Illinois. Meanwhile, the women’s team had a gut-wrenching loss at Rutgers and an inspired rally come up short against No. 5 Maryland. Here are six NUmbers behind another up-and-down week for Northwestern basketball.

Scottie Lindsey apparently got the message. After being benched for the entire Michigan State game just over two weeks ago, the sophomore has turned the page offensively. Lindsey shot 62.5 percent from the field last week and made six of his nine three pointers during that stretch. Since the Michigan State game, Lindsey is shooting 58.6 percent overall. Lindsey also contributed defensively in Northwestern’s win over Illinois, holding his own while also forcing a key steal late in the game. His elevated play comes at a good time for the ‘Cats, as fellow wing and three-point marksman Aaron Falzon has struggled recently (shooting 22.2 percent since the Michigan State game).

This number would be +9 if we wanted to refer to Northwestern’s largest lead in the second half against Ohio State. However, the Wildcats lost the turnover battle 14-5 and Ohio State capitalized, outscoring Northwestern 32-15 over the final 10:01 of the game. During that key stretch, Northwestern turned the ball over six times in about five minutes and allowed Ohio State to shoot (and make) 16 free throws. For a team that shoots a lot of jumpers but has inconsistent shooters, Northwestern can ill-afford to throw away possessions and give the opponent opportunities for transition offense. Wasting what could have been an opportunity to beat a similarly-ranked team in the Big Ten could be the difference between being on or off the NIT bubble.

Tre Demps is a streaky shooter, and this season Demps has seen more cold streaks than hot ones. He’s shooting a career-worst 30.2 percent from three this season, and shot under 20 percent from deep in the first nine games of conference play. In the past four games, however, Demps has turned it on, shooting a respectable 41 percent from beyond the arc. He isn’t lighting it up all game long, but Demps’ is prone to some sizzling offensive stretches (like the four straight threes made against Illinois). If he can continue to shoot adequately from range, and occasionally have a few stretches of straight fire here or there, Northwestern has a chance to make a run at superior teams like Purdue or Michigan. If Demps regresses to the poor shooting he had early in conference play, the Wildcats won’t have enough of a scoring punch to stay competitive with the conference’s elite teams.

Northwestern has had trouble finding scoring off the bench all season, and against the No. 5 team in the nation it was no different. The Wildcats were held without a bench point, while Maryland’s bench put up 25. The ‘Cats gave up 15 bench points to Tierney Pfirman and let Maryland shoot 56 percent from the floor and 63 percent from beyond the arc. Although the ‘Cats were able to make the game close, it was their offense, or lack thereof, near the end that did them in as they couldn’t find very many shots after Nia Coffey fouled out.

One of the bright spots for the ‘Cats against Maryland was their ability to force turnovers, as the Terrapins turned the ball over 24 times. Further, Northwestern was able to turn those turnovers into offense, scoring 24 points off turnovers. After going down by 20 in the first quarter, Northwestern was able to rally over the next three to pull within five, thanks in large part to their aggressive defense. With Brionna Jones off the floor with three fouls, the ‘Cats cut the deficit to nine, forcing four turnovers and going on an 11-0 run. While NU didn’t come out with a win, they can take solace in the fact that they’re just one of four teams to lose to Maryland by less than 10 points.

With very little off the bench, Head Coach Joe McKeown has been forced to play his starters extended minutes and this past week, Northwestern’s starters – Inman, Coffey, Deary, Lyon and PKA – played 93 percent (371 of 400) possible minutes for the ‘Cats. If there’s one reason why this team stands at 3-11 in conference play, it’s none other than their lack of depth. The ‘Cats have no reliable scorers on the bench, forcing McKeown to play the starters for basically the entire game. And playing extended time, those five have worn down as Big Ten play has gone on, leading to poor shooting percentages, fourth quarter play and defense. It’s been a really rough conference season for the ‘Cats and the lack of depth is the main reason why.