Posted on February 16, 2016 by Michael Stern Leave a comment

Another week, another buy/sell. Michael Stern breaks down three teams/players/stats trending up in Big Ten basketball, and three more trending down. 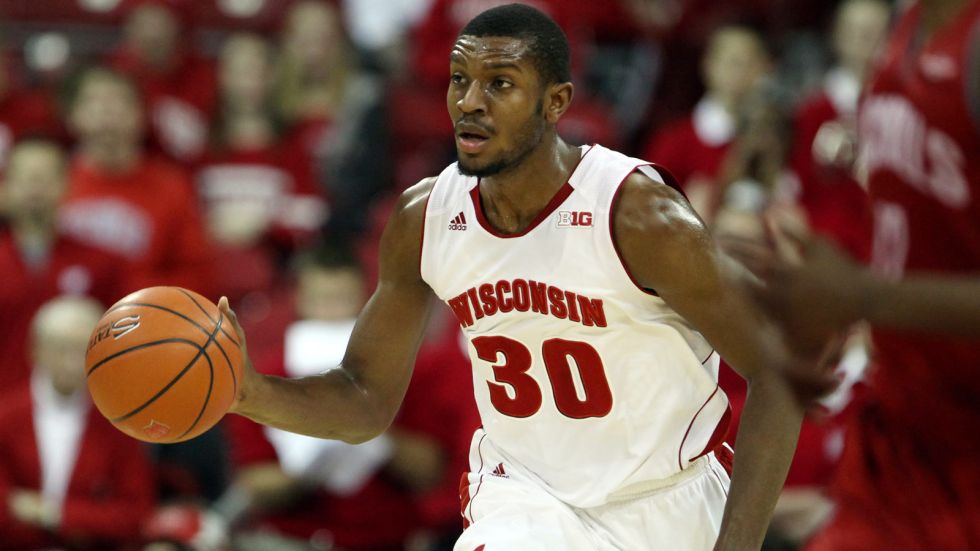 Wisconsin hasn’t lost since they played Northwestern in early January, thanks in large part to Vitto Brown’s transformation into a viable third scoring option.

1. Wisconsin (especially Vitto Brown): Remember when the Badgers lost to Northwestern at Welsh-Ryan? Well, Wisconsin hasn’t lost since that game, having run off seven consecutive victories, including double-digit wins this week against Nebraska and AT MARYLAND. One key to the Badgers’ turnaround has been the emergence of Brown, who had exactly one double-figure scoring game (10 points against Nicholls State) in his first 48 games as a Badger. Brown has developed into a solid offensive player this year, and his 119.5 points per 100 possessions in conference play rank 13th in the Big Ten. Last week, Brown transitioned from glue guy to third scoring option, scoring 18 points on 6-of-7 shooting against the Huskers before dropping a team high 21 on 8-of-14 shooting in College Park. If Brown continues to produce offensively, the Badgers (who quietly now have the 47th-best RPI and are as good against top-100 teams (8-5) as they are against teams 101 and up (8-4)) should get into the tournament, and could make some noise in March.

2. Denzel Valentine: Bryn Forbes didn’t have a good shooting week for the Spartans, which as been trouble for Tom Izzo’s team in conference play. Sparty is 1-5 in conference when Forbes makes less than three triples, but picked up one (and almost two) wins against ranked teams without Forbes getting to the three-triple threshold thanks to Valentine. First, he dropped 27 points and 10 dimes at Purdue in a game that could have gone to double overtime if the Spartans didn’t inexplicably foul at the end of the first OT. Then, he continued the whole “Valentine plays well on Valentine’s Day” legend by collecting 30 points and 13 assists against Indiana. These are Valentine’s first two point-assist double-doubles of conference play, and the Spartans have a whopping 50% chance (per KenPom) to win their final five conference games and finish league play at a very respectable 13-5.

3. Andrew White III: I’m buying White III for the second time this season, because of his remarkable game Sunday against Penn State. He took efficiency to the next level, scoring half of the Huskers’ points while taking one-third of the team’s shots. That’s right, White dropped 35 on 11-of-17 shooting in Nebraska’s 70-54 win over the Nittany Lions. He’s one of two players in the B1G who’s top-12 in both two-point and three-point field goal percentage. Michigan’s Aubrey Dawkins is the other, and White has attempted 93 more two-pointers and 82 more triples than the Michigan reserve. Quite the season for White, who played double-digit minutes three times during his year at Kansas.

1. Maryland: The Terps could have been sold simply for scheduling a non-conference tussle with Bowie State in the middle of Big Ten play (if you were wondering, Maryland handled the Bulldogs (that’s their nickname), 93-62), but then Maryland laid an egg on flash mob night and lost at home to unranked Wisconsin. That would have been bad enough, but Diamond Stone slammed the aforementioned Vitto Brown’s head to the floor late in the first half, earning a technical foul and a one-game suspension. Melo Trimble shot an uncharacteristic 1-for-14 from the floor, the Terp bench contributed four points, and Wisconsin grabbed ten more boards than a Maryland team that stole a couple games last week by winning the rebounding battle. The Terps will be fine in the long run as soon as Trimble gets out of his mini-slump, but it was a disappointing week for a team that had risen to the second spot in the AP top 25.

2. Iowa’s Bench: It was also a rough week for conference favorite Iowa, as the Hawkeyes lost at Indiana before surviving at home against Minnesota. This week, the previously praised Hawkeye bench came up short. Indiana’s reserves outscored Iowa’s 28-0 in the mid-week matchup, helping the Hoosiers overcome a 24-point performance from Jarrod Uthoff. Then, the Hawkeye bench was outscored 27-6 by the reserves of 0-13 Minnesota, and the Hawkeyes barely survived behind 24 more points and 13 rebounds from Uthoff. The Hawkeyes are in great shape at 11-2 in conference with a manageable schedule left to play, but come tournament time Fran McCaffrey will need more from his reserves.

3. Illinois’ Interior Defense: The Illini defense has come under fire before in this column, but while last time’s mention was a general complaint, this week the Illini are responsible for a more specific offense. Illinois ranks 346th out of 351 Division 1 college basketball teams, blocking 4.2% of opponents’ shots this season. The Illini have not blocked multiple shots in a single game since their January 10 upset victory over Purdue. No Illinois player is blocking more than one percent of opponents’ shots in conference play (center Maverick Morgan places first on the team and 48th in the Big Ten blocking 0.72% of opponents’ shots). Combine the startling lack of blocks with the Illini’s opponent three-point percentage (38%, good for 13th in the Big Ten and 310th in Division 1), and the Illini’s defensive struggles become clearer.