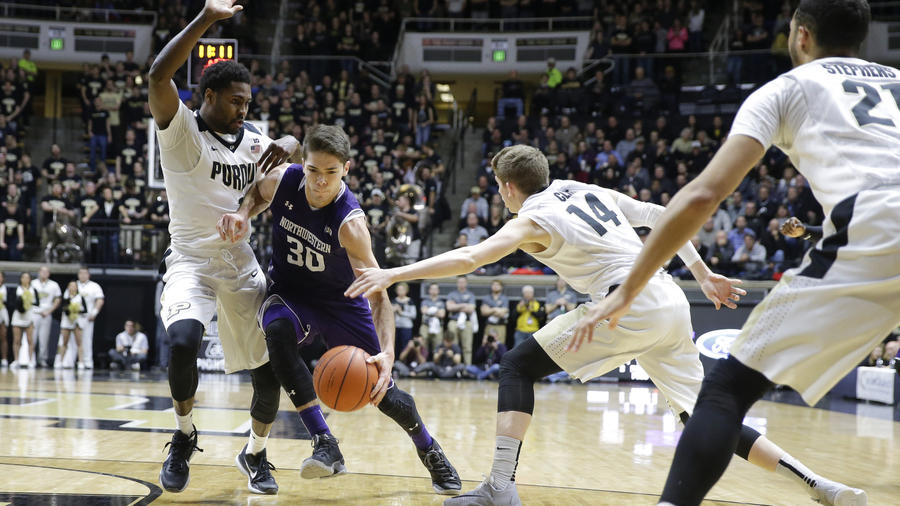 There were only three games–and one win–for Northwestern Men’s and Women’s Basketball last week, as the ‘Cats continued to struggle. Northwestern Men’s Basketball went into West Lafayette and remained competitive with the Purdue Boilermakers for much of the game, only to fall because they just couldn’t handle Purdue’s bigs. On the other side of the court, Northwestern’s Women’s basketball got thrashed at home by Penn State, but then went on the road and blew out Wisconsin. The men’s loss to Purdue wasn’t necessarily “bad,” but it was a missed opportunity to improve their postseason résumé. The women, meanwhile, were swept by Penn State this year and are staring at a bottom-three finish in the Big Ten.

With only a handful of games left for either team, here’s a look at the NUmbers behind the past week in Northwestern Men’s and Women’s basketball.

Dererk Pardon played just six minutes against Purdue as he struggled with foul trouble; he ended up fouling out with a little under nine minutes left in the game. After breaking onto the scene with a huge game at Nebraska, Pardon has really struggled in Big Ten play as of late. He has just six points in 46 minutes over the last four games, and has had three or more fouls in each of the last five games. Whether Pardon is having trouble adjusting to Big Ten play or he’s just not yet big enough to contend with other Big Ten centers, Northwestern’s really missed his presence down low and on the glass.

As the saying goes, you live and die by the three. That has certainly been the case this year for the ‘Cats. In wins, Northwestern is shooting more than 30 percent better from behind the arc than in losses, when the ‘Cats shoot about 25 percent. Further, Northwestern hasn’t won a game where its shot less than 33.3 percent from beyond the arc, and in only one of their losses has Northwestern shot better than 33 percent from three. The ‘Cats have relied heavily on the three-point shot this year, and with many of their shooters showing inconsistent touches, they’ve been “dying” more than they’ve been “living” from beyond the arc.

This was simply a case of Northwestern coming out flat and never recovering. The ‘Cats’ clunker against Penn State was largely due to their ineffective first half that put them in an early hole. After an Ashley Deary three-pointer with 1:28 left in the first, Northwestern only scored six points in the next 12:40 of game action, including the entirety of the second quarter. The Nittany Lions scored 24 during that same stretch, building an insurmountable lead in the process. The ‘Cats’ lack of energy also led to a 34-20 rebounding disadvantage and a 19-point loss despite taking five more field goal attempts than the Lady Lions. Joe McKeown is still searching for that elusive first career victory over Penn State.

The script flipped for Northwestern in Madison. Despite shooting only 23 percent (3-13) from deep, Northwestern easily beat Wisconsin, 71-53. The reason? Northwestern shot 53.3 on two-pointers and converted 14 of its 16 free throw attempts. Combine that with a 38-25 rebounding edge, and Northwestern’s advantage inside over the Badgers was apparent. The ‘Cats got inside and were able to score or get fouled more often than not, a formula which has worked for much of the season. None of the trends in this game were particularly surprising, however; Northwestern is last in the Big Ten in three-point shooting percentage (30.8 percent), but it was able to exploit a Badgers team that struggles on the glass (last in the Big Ten with a -4.8 rebounding margin).

Speaking of inside game, Pallas Kunaiyi-Akpanah has a good one. The freshman went 8-13 from the field in last week’s games, scoring 16 points and grabbing 21 boards. Eight of those rebounds were offensive rebounds against Wisconsin, which was a big key for the ‘Cats. Considering PKA accounted for 36 percent of the team’s rebounds last week and has eight straight games with seven or more rebounds, she continues to be a valuable piece for Northwestern despite the team’s struggles over the past two months.