Posted on February 26, 2016 by Austin Miller Leave a comment

Northwestern isn’t a great basketball team. Rutgers is much, much worse.

Northwestern is not a great basketball team. By most metrics, Northwestern is a below average Big Ten team. According to KenPom, in conference games, Northwestern is the 10th best offensive team in the conference, and the 9th best defensive team. Those numbers aren’t great. That said, there are times, such as Wednesday against Michigan, or earlier against Wisconsin, that Northwestern plays above their expected level. Chris Collins seems to have his side playing hard-nosed basketball over the past weeks, the results just don’t seem to backing that up.

While Northwestern is clearly a below average Big Ten basketball team, Rutgers is not. Rutgers is bad. Unbelievably bad. Potentially worst power conference team ever bad. On Tuesday, Rutgers battled Minnesota, a team that was 1-13 in the conference. Minnesota won 83-61. Yes. You read that right: Minnesota, a team that was 1-13, so clearly the second worst team in the Big Ten, played Rutgers and beat them by 22. According to KenPom, Rutgers is the 302nd best team in college basketball. There are 351 teams. Teams that are ranked higher than Rutgers (all rankings used as of Thursday morning) include:

That’s just a sample of the teams ranked ahead of Rutgers. Somehow, Rutgers have won 6 games this year. Of those six wins, just two have come against teams ranked in the top 300, and one came against a Division II side. Fittingly enough, Rutgers played the worst team in college basketball, Central Connecticut, and won by 16.

This is a bad basketball team.

No matter which way you look at it, Rutgers is so clearly anchored at the bottom of the Big Ten. Just look at this team’s KenPom breakdown for conference games: 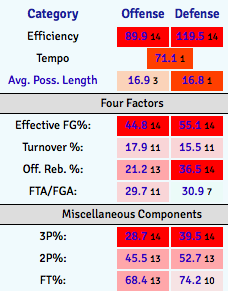 IT BURNNNNNS. SO MUCH RED.

So how is a Big Ten team this bad? Truth is, I don’t know. Eddie Jordan is in his third year as coach of this team, and this is the worst of the bunch! To make matters worse, Rutgers’ only player definitively at a Big Ten leve, Corey Sanders, will be serving the 4th game of his 4th game suspension handed out earlier this month for, “a violation of team rules.” Without Sanders, Rutgers goes from “eye-burningly dumpster-fire” bad to “18th Century London Sewage system” bad.

So tomorrow, does Northwestern just need to show up to win? Not exactly, but sort of. If Northwestern plays like they’ve been playing the past couple of games, this will be a blowout, and Charlie Hall should see extended run. If Northwestern plays like they played against Penn State earlier this year, this game will be closer than it should be before the ‘Cats pull away in the final 10 minutes. If Rutgers is going to win this game, or any Big Ten game this year, the Scarlet Knights will need to play like they did against Illinois: fire, passion, and hustle combined with good shot taking, and a poor opponent. Anything short of Rutgers’ best game going up against Northwestern’s worst game will end in an easy Northwestern win.

Regardless, one thing is clear about Welsh-Ryan Arena on Saturday: