Posted on March 2, 2016 by Michael Stern Leave a comment 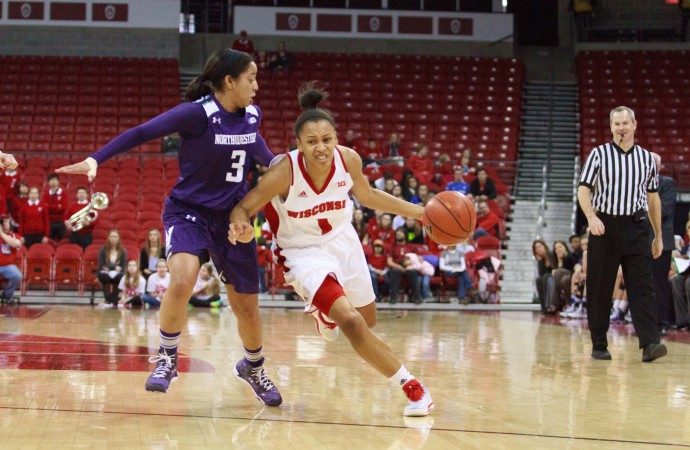 Ashley Deary and the Wildcats beat Wisconsin by 18 two weeks ago. Can NU repeat the performance and get an opening-round win this afternoon at the conference tournament? Photo Credit: TheBadgerHerald.com

Northwestern, ranked in the top-15 during non-conference play, now faces a daunting task: win five games in five days in Indianapolis, take home the Big Ten Tournament title, and earn the NCAA Tournament bid that comes with it.

After starting 10-0, the Wildcats split their last two non-conference games and finished 4-14 in conference play. At 15-15, the team needs an opening-round win this afternoon against 13th-seeded Wisconsin to stay in contention for the Women’s NIT. If NU can defeat the Badgers (a team they defeated by 18 points in Madison two weekends ago), the Wildcats would advance to face Rachel Banham and fifth-seeded Minnesota tomorrow afternoon. The Gophers took two tight games from the Wildcats this season, with Banham’s 60-point outburst in the second meeting catching Kobe Bryant’s attention. Knock off the Gophers, and a matchup with fourth-seeded Indiana, another team the Wildcats held a fourth-quarter lead against, awaits on Friday. After that come conference elites, likely Maryland and Ohio State.

Winning five games in five days would be a tough task for any team, but it might be extra challenging for these Wildcats. The team has been plagued by injuries all season, with Lauren Douglas missing the entire year and Maya Jonas and Jordan Hankins also missing extended time.

Two weeks ago, Northwestern beat the Badgers thanks to big edge inside, out rebounding Wisconsin 39-30 and outscoring the Badgers in the paint 42-26. Pallas Kunaiyi-Akpanah (10 points, 14 rebounds) and Nia Coffey (15 points, 11 rebounds) recorded double-doubles, while Maggie Lyon (18 points, 9 rebounds) was a rebound shy of the same. The Wildcats only received nine points off the bench, but didn’t lose much ground there as Wisconsin reserves tallied only 10 points.

For a repeat performance, NU will need repeat performances from Kunaiyi-Akpanah and Coffey, and some stronger outside shooting (the team was 3-for-13 from distance) just to be safe. Another key in this game will be rest for the Wildcats’ core four of Coffey, Lyon, Ashley Deary, and Christen Inman. If NU wants to stay alive in the Big Ten Tournament, the Wildcats’ best players will need to stay on the court. Look for coach McKeown to try to turn to his reserves early if the game appears to be slanting in Northwestern’s favor. While Lyon (38 minutes) and Inman (37 minutes) hardly left the floor two weeks ago, Deary (32 minutes) and Coffey (31 minutes) got more minutes off than usual.

Prediction: The Wildcats get a win against Wisconsin, but suffer a set-back in the game within the game, as the starters have to play heavy minutes to seal the victory and won’t be as well-rested for the team’s next game against Minnesota.