Northwestern heads into PSU with NIT hopes dangling by a thread 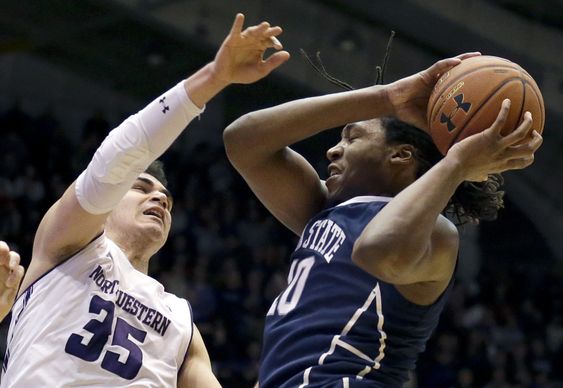 Brandon Taylor led Penn State to a January road win in Evanston. Can the ‘Cats return the favor in Happy Valley?

Let’s play a little game. Tell me which team has a better resume here.

Team one is the Northwestern women’s team, who are in danger of missing the 64-team WNIT.

And while it is probably not an incredibly useful exercise to compare teams who are playing two different sports, it does display just how weak the men’s team’s NIT resume is as the regular season wraps to a close.

Today’s trip to the Bryce Jordan Center does not provide the team with a chance to dramatically improve their resume. In fact, a loss in this toss-up game (Vegas sees the game as a pick-em and KenPom favors the Nittany Lions by a single point) would likely be the final nail in Northwestern’s coffin.

Penn State is not a good team.

Brandon Taylor is a nice piece and hit Northwestern for 19 points in their first meeting, but their other players, from Donovon Jack to Shep Garner and Payton Banks, don’t exactly send shivers down your spine.

We should probably at least talk about that last game though.

It’s also not extremely helpful in predicting this game.

Northwestern isn’t going to shoot 3-26 from deep again.  Aaron Falzon is not going to 1-9 from 3.  The Bryce Jordan Center is a tough place to play in because the depth cues are bad and the atmosphere is more reminiscent of Sunday mass than a basketball gym, but it isn’t so hard to play in that a poor shooting effort should be expected.  Alex Olah is going to play more than 7 minutes.  Donovon Jack is almost assuredly not going to drop 14 again.  So many outliers all came together and led to Northwestern coughing up a game at home they had no business losing.

If there is one thing that Northwestern fans should be wary of, it’s the way Penn State attacked Northwestern’s zone.  Crisp side to side ball movement led to more than a handful of unguarded threes.  Northwestern’s been a little more willing to ditch the zone for man-to-man recently, but there should be at least a little bit of worry about how Penn State will attack Northwestern on that end of the floor.

Northwestern needs a win to extend the NIT dream a little longer.  If the Wildcats go out and execute their game plan, that shouldn’t be a problem.