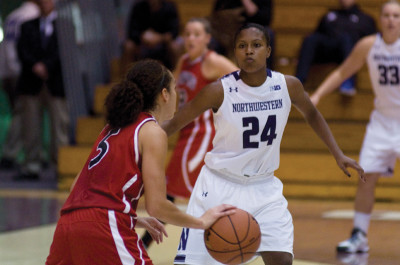 Through 3 quarters, Northwestern had it all going on.  They were 9-22 from 3.  They were owning the offensive glass.  Even with Pallas Kunaiyi-Akpanah forced to sit for most of the 3rd quarter with foul trouble, NU found an ample replacement in Allie Tuttle who grabbed 3 rebounds and put in a couple of layups.

Banham and Wagner provided a dangerous duo that Northwestern couldn’t keep quiet forever. Banham got to the stripe at will. Wagner hit some tough shots. But in the end, even the best player in the Big Ten and her super running mate weren’t enough to knock Northwestern out of the tournament.

With Maggie Lyon forced out of the game due to injury, the Wildcats could have gone softly into the night. Instead, the backcourt showed out. Christen Inman poured in 18. Jordan Hankins played great minutes off the bench for the second day in a row, knocking down a couple of big first half threes and knocking down clutch free throws to finish with 14.  Ashley Deary finished with 12 points, 10 rebounds, and 9 assists. Even without Maggie Lyon, the Northwestern backcourt hung real tough

Late in the game, Northwestern made Minnesota pay in transition. Two huge and-ones from Coffey then Inman put Northwestern up.  Pallas Kunaiyi-Akpanah came back in and got what felt like 8 offensive rebounds in 2 minutes.

So often this year, Northwestern would put itself in winning positions and let the game get away.  This time, they had enough in the tank.  Northwestern effectively punched its ticket to the WNIT with this win.  A huge game, a huge win. Wow.

Nia Coffey is a freak

Nia Coffey is too dang big, fast, and talented for replacement level frontcourt players to check.  Minnesota has as good a backcourt as the Big Ten has, but their frontcourt leaves a lot to be desired.  Nia Coffey made her hometown team pay.

Was she incredibly efficient? No. But who cares? She scored 25. She had 12 boards. She couldn’t be stopped in transition. She limited Minnesota’s forwards to functionally nothing offensively.  There is no doubt that she is one of the 5 best players in this conference.

Deary’s nigh triple-double and Inman’s red hot shooting were key, but make no mistake, Nia Coffey was the key.

Where was this shooting all year?

During a year where Northwestern has really struggled to connect from the outside, Northwestern caught fire from beyond the arc.  Jordan Hankins, who went into the postseason with a 3FG% down around 16% again hit multiple outside shots.  Christen Inman, whose seen her 3FG% drop below 30% in Big Ten play cashed in the looks she got. Coffey extended her range beyond the three-point arc.

This is how the team was supposed to look all year.

When this squad can force defenses to respect 4 three-point shooters on the floor, the offense opens up in a big way.  That we were able to see that without Lyon on the floor was a surprise, and it probably caught Minnesota flat-footed too.

Rachel Banham played one of her worst games this year.  She finished with 26, sure, but she went 7-25 from the floor and an alarming 3-14 from three.  When Minnesota has to lean on Carlie Wagner more than Banham, they become a vulnerable team.  Christen Inman did a great job staying with Banham and Deary did enough to bother her in the backcourt that Banham never really got into the game.

Carlie Wagner is a useful player and deservedly earned 2nd Team All-B1G honors, but she can’t carry a team when Banham’s not hitting.  Minnesota looked like a team that knew a loss would mean the end of their NCAA hopes.  They were tight.  Northwestern was loose. That meant a lot.

Indiana is on deck. Indiana is not a great team. Survive and advance? I like Northwestern’s chances.