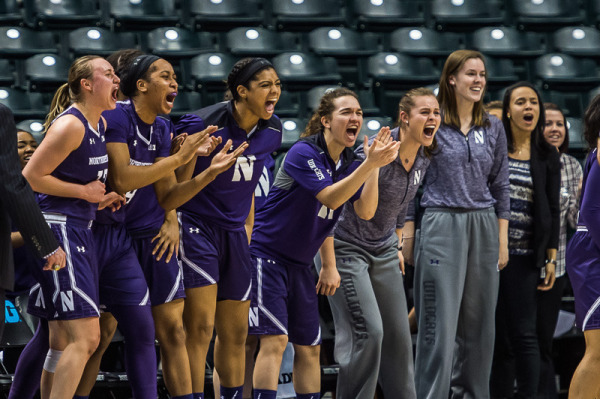 After a deflating end to the regular season, Northwestern women’s basketball came to play in Indianapolis. The 12-seeded Wildcats rallied for an overtime victory against Wisconsin in the first round on Wednesday, and then upset fifth-seeded Minnesota and fourth-seeded Indiana the following two days. The Cinderella run came to an end Saturday when Northwestern lost to top seed and eventual tournament champion Maryland. The three wins pushed Northwestern back into the chase for a WNIT berth, however, and allowed the ‘Cats to avenge regular season losses to the Gophers and Hoosiers. Here’s a look at the NUmbers behind Northwestern’s miraculous run through the Big Ten Tournament.

Nia Coffey was selected to the All Big Ten First Team last week, and she showed why in the Big Ten tourney. Coffey dropped an even 100 total points in Northwestern’s four games, the most any player has ever scored in women’s Big Ten Tournament history. With Maggie Lyon out with an injury, most of the scoring load was put on Coffey’s back, and she delivered big time. She had double-doubles in the middle two games and scored half of the team’s points in the ‘Cats’ loss to Maryland. Coffey was consistently dominant inside and unquestionably Northwestern’s best player during the tournament run, as she was for the entire season.

When Minnesota visited Welsh-Ryan Arena on Super Bowl Sunday, Rachel Banham got buckets. As in an NCAA record-tying 60 of them. Northwestern learned their lesson defensively and Banham cooled off in the rematch. She still led all scorers in the game with 26 points, but it took 25 shots for her to reach that point. Banham shot 7 of 25 from the floor, good for only 28 percent. From behind the arc, that number drops to 21 percent (3 of 14). With the ‘Cats clinging to a close lead after halftime, they prevented Banham from swinging the momentum in Minnesota’s direction, holding her scoreless in the third quarter. Northwestern lost Banham’s 60-point game in double-overtime, but keeping her in check in Indianapolis allowed the Wildcats to take control of the game.

The Wildcats’ outstanding run through the Tournament may have never come to fruition without a late rally in the opening game. Down by six at the start of the fourth quarter against Wisconsin, Northwestern went on an integral 9-2 run in less than three minutes to take the lead and get back into the game. Wisconsin would again jump ahead later, but a layup from Christen Inman sent the game to overtime and a clutch jumper from Amber Jamison with less than a minute left in the extra period gave Northwestern a lead it wouldn’t relinquish. The ‘Cats largely struggled in close games this season, going 1-9 in conference games decided by fewer than 10 points. With that in mind, it was refreshing to see Northwestern make plays in crunch time and hold onto its leads in tournament play.

But alas, Northwestern ran out of gas, playing their fourth game in as many games against a supremely talented Maryland team. With the ‘Cats tiring, Maryland was able to wear Northwestern down on the glass and eventually build up a big second half lead. Coffey had another spectacular game, finishing with 31 points, but it was her two counterparts, Inman and Ashley Deary, that couldn’t find a shot. Against Maryland the two shot a combined 13 percent, with Deary not making a single field goal, and Inman making just three. Credit has to give to Maryland, who’s one of the best, if not the best, teams in the Big Ten, but if Inman and Deary make a higher percentage of their shots, this might have been a more interesting game down the stretch.

For much of Northwestern’s season the ‘Cats had trouble finding scoring off the bench. Maya Jonas and Jordan Hankins missed extended periods of time, while the rest of the Wildcats bench couldn’t get much going. But with Maggie Lyon out, Northwestern need its bench to step up, and they did in a big way. Allie Tuttle, Amber Jamison and Hankins all made sizeable contributions, and Lydia Rhode stepped up when thrust into a starting role. In the Big Ten Tournament the ‘Cats bench averaged 16.0 PPG, more than the bench put up in any conference game. Not only did this help Northwestern win three games in three days, but it also bodes well for the future as Jamison, Hankins, Rhode and Tuttle all should take on larger roles next season for the ‘Cats.

Not only did the ‘Cats need their bench to come up big, but Northwestern needed its core four to step up their game as well. And in the three Wildcat wins, Christen Inman did just than, averaging 18.0 PPG, four more points per game than her season average. Further, Inman also improved her shot selection, shooting at a 5 percent clip better than her field goal percentage in conference play. And to top it all off, Inman was tasked with harassing the opponents’ best players, and she did a great job there as well, keeping Rachel Banham, Nicole Bouman and Tyra Buss below their season average and forced them to work hard on every shot.