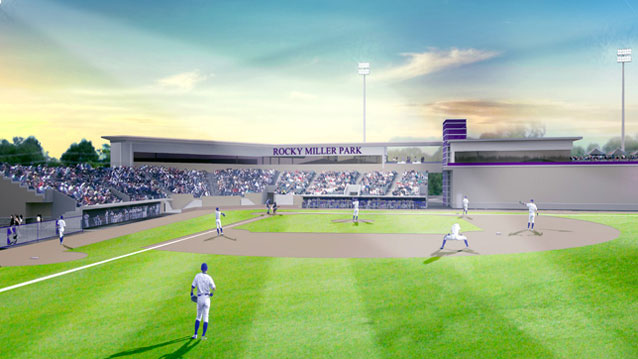 An artists’ depiction of the newly-renovated Rocky and Berenice Miller Park that’ll open for the first time on Wednesday. Photo Credit: Northwestern Athletics

The Northwestern Wildcats (6-18, 1-2 B1G) will look to open up the new and improved Rocky and Berenice Miller Park with a win on Wednesday as they take on the Chicago State Cougars (5-16, 0-3 WAC).

The game, which will be broadcast at 3 p.m. on WNUR Sports’ UStream, will be the first of five consecutive home games for the Wildcats in Evanston after 24 road games to begin the season. The Wildcats welcome the Michigan Wolverines on Friday for the first of three conference games before taking on the UIC Flames on Tuesday.

The Wildcats entered last weekend’s conference opener at Ohio State on a six-game skid, but won a the first game of the series Friday night, 6-5, on a ninth-inning single off the bat of Matt Hopfner.  Northwestern fell to the Buckeyes, 5-2 on Saturday, but were in position to take the series on Sunday with a 4-3 lead with two outs in the ninth. The Buckeyes had other ideas, though, as Jacob Bosiokovic hit a walkoff 2-run homer off Pete Hofman to hand the ‘Cats a 5-4 defeat.

The Cougars enter their Tuesday afternoon matchup with Western Michigan on a six-game losing streak of their own. They’ll look to reverse their fortunes against Northwestern, who beat them 5-4 in 10 innings last spring.

Projected starters have not been released for either team, but follow @WNURSports on Twitter for updated information as game time approaches.  Erik Bremer (@Erik_Bremer) and Will Greer (@Willy_Nillie) will be on the call for WNUR.