Posted on March 31, 2016 by Michael Stern Leave a comment 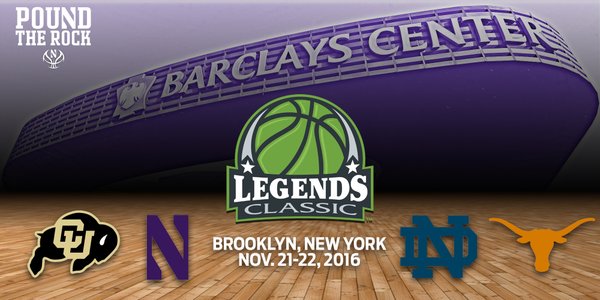 Northwestern men’s basketball will face stiff competition at the Legends Classic in Brooklyn.

Last season, Northwestern men’s basketball missed the NIT despite a 20 win season, thanks in large part to a non-conference strength of schedule which ranked 323rd out of 351 teams.

The Wildcats are already taking steps to strengthen next year’s non-conference slate to make sure a weak non-con doesn’t leave NU out of post-season play again.

Northwestern announced today that it will participate in the 2016 Legends Classic in Brooklyn, New York. The tournament takes place on November 21 and 22 at Barclays Center, home of the Brooklyn Nets.

UPDATE: As part of the Legends Classic, the Wildcats will also host games against two teams from the following group of four: Bryant University, Eastern Washington University, University of Louisiana-Monroe, and Seattle University.

Louisiana-Monroe was the best of the bunch in 2015-2016, finishing 15-5 in the Sun Belt and losing close non-conference games to Minnesota and Penn State.