Posted on April 1, 2016 by Matt McHugh Leave a comment 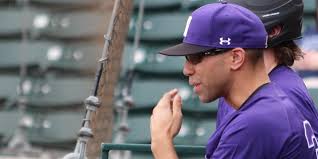 After winning their first ever game at the new Rocky and Bernice Miller Park on Wednesday, the Northwestern Wildcats will host the Michigan Wolverines in a weekend series starting Friday afternoon.

Due to inclement weather, Saturday’s game was cancelled and the teams will play a doubleheader on Friday. The first game is at noon and the second game is at 3 p.m. Sunday’s game is still scheduled for 1 p.m.

The Wildcats started the season by going 5-16 in non-conference play, but showed some signs of improvement by beating Ohio State last Friday and almost again on Sunday.

The Wolverines come into Friday’s game on a six-game winning streak and with the second best non-conference record in the Big Ten. That record includes wins over no. 10 California and no. 22 Oklahoma State.

Junior catcher Harrison Wenson is having a breakout year and has emerged as one of the leaders of the Wolverine offense with a .400/.453/.613 slash line.  Wenson only started two games last year, but now leads the Big Ten in RBIs with 26. He also has four of the team’s six home runs this season.

However, he has plenty of help in the lineup, as four other Wolverines are hitting over .300 this year. One of those players in junior Carmen Benedetti, who also is a dominant relief pitcher. He has a 1.036 OPS at the plate and has allowed only one hit in his seven relief appearances.

On the mound the rest of the Wolverines’ pitchers are just as strong, if not better. Sophomore lefty Oliver Jaskie led the team with a 1.91 ERA in his five non-conference starts. The pitching staff as a whole held opponents to a .195 batting average and struck out 199 batters in 186 innings.

The Wildcats will try to find some stability in their starting rotation to match up against Michigan’s. Jake Stolley got roughed up by Chicago State in his first career start on Wednesday, and Reed Mason was the only pitcher to put up a quality start in last weekend’s Ohio State series. The ‘Cats have already used 10 different starting pitchers this year.

The ‘Cats finish their homestand with a single game against UIC on Tuesday. First pitch will be at 3 p.m.