Posted on April 7, 2016 by Matt McHugh Leave a comment 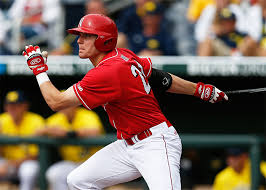 Northwestern’s baseball team looks to be in for another losing season with no players projected to be drafted highly. However, they play plenty of talented players in the Big Ten that are highly sought after by MLB teams. Baseball America ranked the top 100 college draft prospects before the season, and here’s an update on how some Big Ten players have been doing.

Boldt is only a junior, but he still came into the 2016 season as the no. 13 ranked college baseball prospect. So far this year, he hasn’t disappointed. He’s posted a .339/.394/.512 slash line in 28 games. He’s also showed off his impressive speed with 14 stolen bases, second most in the Big Ten.

Boldt was a 22nd round pick by the Boston Red Sox in the 2013 draft, and since then has significantly raised his draft stock. He was a Louisville slugger freshman All American in his first season, and was a Cape Cod league all star after his sophomore season. Some mock drafts have him going as high as the second round.

Northwestern will get a close look at Boldt’s skill set this weekend as they play a three-game series in Lincoln starting Friday night.

Like Boldt, Shawaryn is a highly regarded junior prospect. However, his 2016 season hasn’t gone nearly as well. The 6-3 righty still has the body and tools of a major league pitcher, but his performance has taken a big hit this year. He’s posted a 4.15 ERA in seven starts, while walking 15 batters in 39 innings pitched.

When that performance is compared to to last year’s, when he put up a 1.71 ERA in 17 starts and set a school record with 138 strikeouts, it’s clear he’s taken a step back. He had high expectations coming into this season, ranked the 15th best college prospect by Baseball America. He still has time to get back on track, but if his struggles continue he may decide to stay for his senior season and go into the 2017 draft.

The Wildcats won’t face Maryland this season, but Shawaryn did pitch in Evanston last May. That was one of his two losses on the season as the ‘Cats won 1-0.

The junior righty has transitioned well into the Illini rotation this year, starting seven games with a 3.50 ERA. Last year, he made 19 of his 21 appearances in relief. He has great strikeout stuff, with 52 strikeouts this year and 111 in his collegiate career.

Sedlock was not drafted out of high school, but has worked his way up in his three years at Illinois. He entered the season as the 36th best collegiate prospect, according to Baseball America. The ‘Cats won’t have to face him this year, but last year he got the win in a three-inning relief appearance during an April game.

Dawson, also a junior, came into this season barely in the top 100, but he’s only helped his case so far this season. In 28 games, he’s posted a .970 OPS and shown his power-speed combo with 6 home runs and 10 steals.

Perhaps the most encouraging part of Dawson’s season has been his improved power. He slugged .454 his freshman year with four home runs, .465 with six home runs his sophomore year, and now is on pace to blow those numbers out of the water. With 29 games and the Big Ten tournament remaining, he has plenty of time to add to his home run total and current .582 slugging percentage.

Northwestern was able to contain Dawson’s bat when the ‘Cats went to Ohio State two weeks ago, as Dawson went just 2 for 12 in the three-game series.

Benedetti has been a dominant force both on the mound at the plate in his junior year, and his performance should propel him way up draft boards. He came into the season ranked no. 98 by Baseball America, but that will surely rise given the monster numbers that he has put up. He has a .344/.500/.527 slash line in 27 games and a 2.00 ERA in nine relief appearances.

He’ll have to choose one or the other by the time he’s drafted, and at this point his career as a hitter seems more likely. He has good gap-to-gap power and a great batter’s eye. He just hasn’t pitched enough innings as a pitcher to go that route.

Northwestern saw a lot of Benedetti last weekend, and he looked as good as advertised at the plate, going 6-13 in the series. On the mound though, he struggled, walking two batters and giving up a run in a brief appearance.