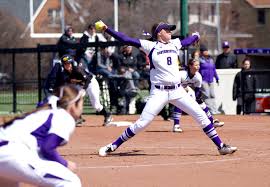 After sweeping Wednesday’s double-header at Illinois, the Wildcats carry a six-game winning streak into their weekend homestand against Nebraska. But that goal won’t come easily, as the Cornhuskers come in with the fourth-best record in the Big Ten.

Both teams so far have relied on consistent production from a variety of hitters in their lineups. Each time has five regular players hitting over .300, and has at least one player with double digit home runs.

For Nebraska, that player is junior third baseman MJ Knighten.  She has started every game this year and has 17 home runs, second most in the Big Ten. She’s also hitting .400 and has a ridiculous .514 on base percentage. But she isn’t the only player on her team to reach those high averages.

Senior outfielder Kiki Stokes comes into the series with a .412 batting average and a .520 on base percentage. She’s also a threat once she’s on the bases, with 15 steals in 19 attempts.

For the Wildcats, both Andrea Filler and Amy Letourneau have 10 home runs this year to tie for the team lead. Filler leads the team with 43 RBIs and is hitting .364 on the season. Letourneau is hitting .337, but her value isn’t just as a hitter. She also leads the ‘Cats by far in innings pitched and is one of the best pitchers on the team.

On the mound, Letourneau has posted a 3.53 in 101 innings this season. Control has been a bit of a problem for her as she’s issued 49 walks this year, but opponents are still hitting just .259 off of her. Freshman Kenzie Ellis hasn’t started the year with the same success though, and has struggled all year. She has a 7.19 ERA in her 14 appearances this year.

For the Cornhuskers Cassie McClure has pitched 114 innings and has put up a 3.04 ERA. She serves multiple roles for the Nebraska pitching staff, picking up 14 wins and five saves this year working as a starter and a reliever. Emily Lockman and Kaylan Jablonski are the other two regular Cornhusker pitchers, but combined they’ve only pitched 19.2 more innings than just McClure.