Way Back Wednesday: The Wildcats in 2000 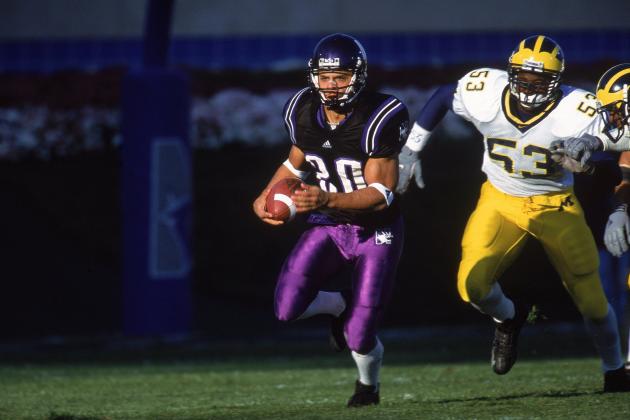 Damien Anderson was “the ballcarrier,” and a very good one, for Northwestern in 2000. Photo Credit: Jonathan Daniel/Getty Images

Although Northwestern baseball topped Chicago State on Tuesday night, it’s been a disappointing season overall for the ‘Cats. Northwestern would have to win each of its final 17 regular season games to finish at .500, a feat the Wildcats as a team haven’t accomplished since 2003.

That being said, 2000 was a notable year for some sports at Northwestern. So this week, we’ll take a look back at the Wildcats in the first year of the new millennium.

It was a good year for Randy Walker and company. The Wildcats went 8-4, earning a berth in the Alamo Bowl and a Big Ten title. The ‘Cats have yet to win a conference title since then.

Northwestern needed some luck on the final day of the regular season, but a win over rival Illinois and a Michigan win over Ohio State gave the Wildcats a share of the Big Ten crown.

Zak Kustok led the team at quarterback while Damien Anderson starred at running back. Anderson capped two thousand yards on the ground in 2000, becoming only the fourth Big Ten player at the time to do so.

The Wildcats’ loss to Nebraska in the Alamo Bowl was only their fourth of the season, and their only loss at home came against Drew Brees and the Purdue Boilermakers. Brees finished third in the Heisman Trophy voting in 2000.

Northwestern wouldn’t reach the eight-win plateau again until 2009 under Pat Fitzgerald, and the team has hit that mark only four times since 2000. If the ‘95 Rose Bowl team is Northwestern football’s most revered team, this one is right behind it.

As well as things went on the gridiron, they couldn’t have gone much worse on the hardwood.

The’99-’00 Wildcats won five games on the season, going 5-24. Four of the team’s five wins came within the first month of the season, finishing the season on a 1-20 stretch.

Northwestern went winless against conference foes, the first Big Ten team to do so since the ‘91 Wildcats.

Among the season’s lowlights was a 63-30 loss to Illinois in Evanston, when the ‘Cats didn’t score in the game’s first 15 minutes and had only six points at halftime.

Safe to say that it wasn’t too surprising when head coach Kevin O’Neill was fired after the season, setting the stage for Bill Carmody to take over in the fall of 2000. It was a shocking fall for the ‘Cats, who in the previous season had gone 15-14 en route to an NIT bid.

While Chris Collins has suffered some growing pains during his first three years as head coach, the days of basketball misery for Northwestern appear to be far away.

Like I mentioned above, the 2000 ‘Cats had a nice year on the diamond.

Northwestern’s 30-27 record would have been even better, but the team finished the year on a four-game losing streak. The Wildcats were bounced early from the Big Ten Tournament, losing its first two games to Minnesota and Ohio State.

That being said, any Wildcats team that makes the Big Ten baseball tournament is notable. Northwestern hasn’t qualified for the tournament since 2010.

Northwestern baseball was a bit of a streaky team in 2000; the ‘Cats suffered a six-game losing streak at the end of March and beginning of May, but was buoyed by four separate four-game winning streaks throughout the season.

No player from the team went on to make a noticeable impact at the professional level, but the team still produced then-head coach Paul Stevens’ best win-loss mark since the 1995 season. While Northwestern has had better finishes in the Big Ten Tournament since 2000, the overall win-loss mark has yet to be eclipsed by any recent team.

New head coach Spencer Allen hopes to change that in the coming years.