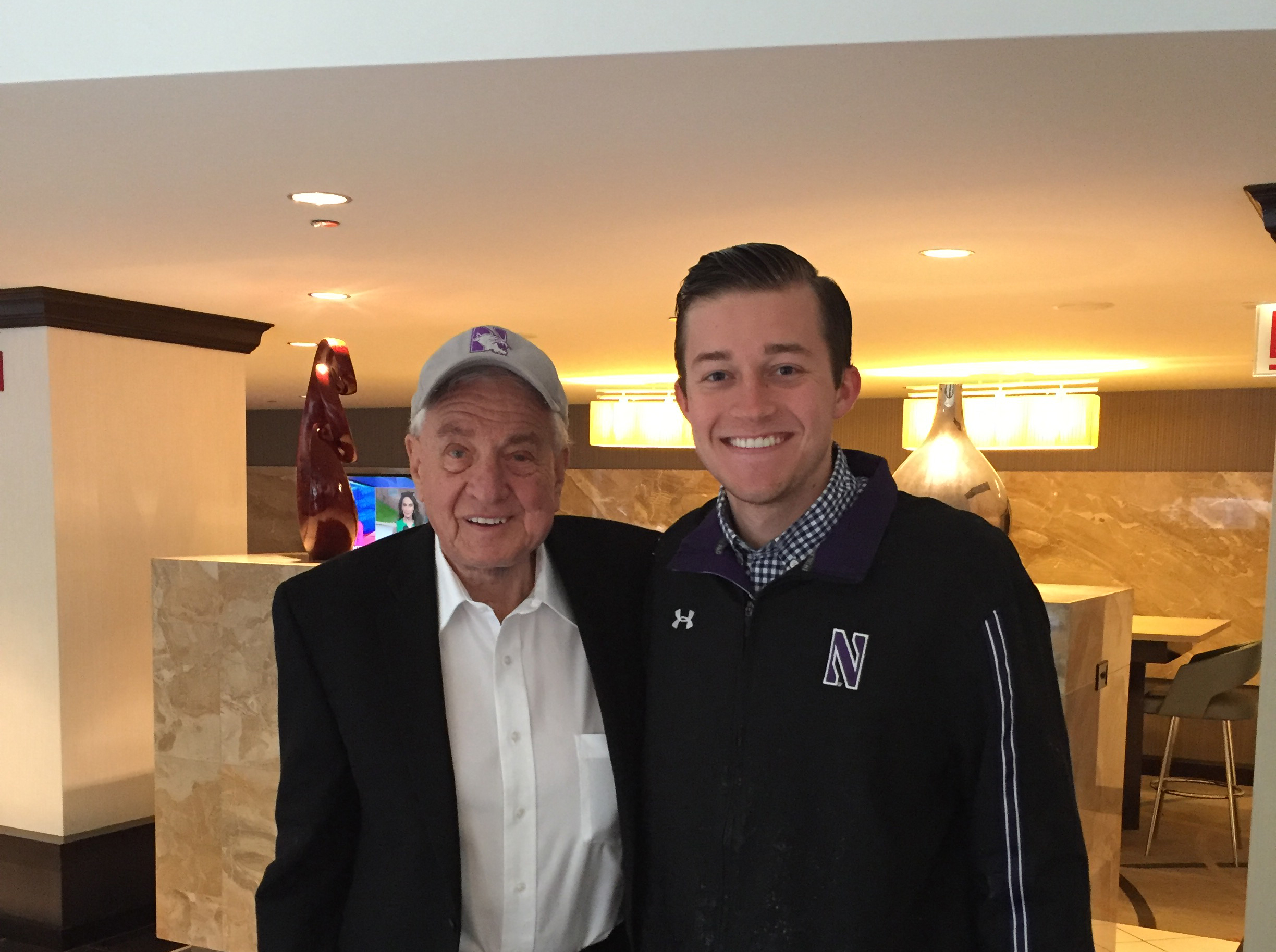 Garry Marshall (Medill ’56) came to campus this week to host a screening of his new film, Mother’s Day. The veteran director and producer, best known for Happy Days, Laverne and Shirley, The Odd Couple, Mork and Mindy, and Pretty Woman, sat down with WNUR Sports to talk about his Northwestern fandom, his storied career, and his plans for the future.

The following interview was edited for brevity and clarity.

Mr. Marshall, welcome to Evanston! You’re here to promote your new film, Mother’s Day, but it must also be nice to come back to your alma mater.

You were here 60 years ago … how has this area changed in that time?

Quite a bit … there are more stores, there are certainly more restaurants.

We have bars now! It was a dry city when you were here.

It was a dry town then. [laughs]

You obviously have a lot of purple in your blood, but you’re also a big sports fan. How closely do you follow Northwestern’s athletic teams?

Actually, pretty closely.  Years ago, I got a subscription to the Daily Northwestern and every month I check it out. Basketball is about the same as when I was here. [laughs] I played freshman basketball when I was here, but I wasn’t good enough. So I figured, if I can’t play I could write about it!

I’ve been told that several times.

At least you’re tall. [laughs] But golf is big and tennis is tremendous! And of course women’s lacrosse has been great for many years, and they’re still not bad.

It must be fun for you to still read the Daily after all these years because when you were here on campus you were the sports editor there.

Yes. That … got me into comedy. [laughs]

Because the football team was so bad.

Well a lot of the teams were bad, but the year that I was sports editor they were 1-11.  Which is hard to write about, so I used to write comedy things … “By the time the Star-Spangled Banner was over, Northwestern was behind by 14.” Stuff like that.

What caused you to make the transition from the journalism world to the entertainment industry?

Well … in my class there were four Pulitzer Prize winners, and I noticed then that they were all better than me.  But I also noticed that the teacher, whenever he would read the pieces to the class out loud everyone would say, “Read Garry’s!” because I would be coming from a comedy place.  I was gonna be a sportswriter but I got interrupted by Uncle Sam.  I spent two years in Korea where I wrote sports for the Armed Forces Korea Network.

How did that influence your later work in entertainment?

Mostly, I was cold! I was cold in the Bronx, I was cold at Northwestern, I was cold in Korea.  That’s why I ended up in California where it was warm!  But it made me thankful that I could write rather than having to do other things.

You’ve had such a prolific career since then, spanning several decades and generations. There are people who know you from The Dick Van Dyke Show, Laverne and Shirley, Mork and Mindy, and then there are people like me who have only seen Happy Days in syndication but appreciate your work in Louie and The Simpsons. How do you negotiate those differences in your fanbase?

I get so many people now who grew up on my shows. I think one of the highlights of my career was seeing this Broadway show Hamilton, which is a big smash … A kid who I put in a lot of my movies, Rory O’Malley, plays the King in Hamilton so I went backstage and Lin-Manuel Miranda came up to me, hugged me, and said, “You got me through my childhood!” That was very nice. It’s good to see that people are appreciating my shows.

And now today, I don’t want to shock you, Erik, but I’m not known as so hip. But I try to surround myself with young people, working with Louis C.K. and doing Brooklyn Nine-Nine, to find out what’s happening among the young people.

Your new film, Mother’s Day, is the third now in a string of holiday-themed ensemble films.  What about that genre appeals to you?

I was always nervous around holidays because I didn’t know what to get my girlfriend for Valentine’s Day, I didn’t know whether to lie or not about having a date on New Year’s Eve, all that.  Growing up in New York, if you didn’t have a New Year’s date you went to the Rangers hockey game. [laughs]  “I can’t go on a date, I gotta go to the hockey game.”

And then on Mother’s Day I could never find a gift for my mother because she didn’t like flowers. So I figured, why not take the anxiety out of the holidays? Take her to a movie, buy her a soda, there ya go.  There’s your Mother’s Day.  I do it funny and light, and … what’s the word the critics always say? “Too uplifting!” [laughs] But that’s what I do. I don’t think I’m going to do any more holidays, though. A trilogy of holidays, that’s fine for me.

Censorship is so different.  Those days the network was so worried that Jack Klugman and Tony Randall would be perceived as gay, and they didn’t want a gay show on television. They would send me memos saying, “Put more girls on the show! Have them date more!”  So purposely we would shoot these little moments when they would hug and stuff.

Just to provoke the network?

It would make the network crazy! But now, the new Odd Couple, it goes right into it. They say, “Felix is a little gay, dontcha think?” Stuff like that.

But at the same time, didn’t the restraints of censorship also force you to be more creative in the ways you pushed the envelope?

Yeah, you did have to come up with ways.  My famous joke on Happy Days was, they wouldn’t let us say the word ‘virgin.’ So we said, “She was pure as snow … but she drifted!”

But I think there’s so much going on in society now … I read the Daily. It’s part of the Daily! All the politically correct, diversity, all this stuff. It’s still difficult [to be provocative], just in a different way.

I read that during Happy Days and some of your other shows, you would always make a point of getting everyone together to make a softball team.

Yes! I always have a softball team.

Let’s imagine that we’ve got a sandlot game going with all the casts of all your shows. Who do you pick for your team?

My team would be best with the Happy Days crew. Ron Howard was really a good ballplayer. Our whole outfield was good! We had Ron Howard in left, Donny Most in center and Tom Hanks in right.  Scott Baio was at short, I played third and first. Eddie Mekka from Laverne and Shirley joined. We had to have … you know, Henry Winkler was a star! So he didn’t [know how to] play! So Ron and I had to teach him to play, and we figured the best position for him would be pitcher because they don’t have to catch the ball too much.

But the best softball game I was ever a part of was between Pagliachi and Grand Duchess of Gerolstein, two operas I was working with. I was directing Grand Duchess, and we had so many people I said, “Let’s do a softball game!” They said they didn’t play softball … but I put up a paper anyway and the musicians signed up, the stagehands, opera singers.  And we had an actual game!  The most exciting part of it was before the game, we had about ten, twelve opera singers singing the star spangled banner. People stopped in the streets! What a sound.

I would totally agree with you. [laughs] I still play softball! In a senior league. I play every week now. In last week’s game we were down 22-10 because, you know, a lot of guys can’t bend down.

Right. If you hit the ball on the ground, you stand a pretty good chance.

Grounders can be tough. But we scored 13 runs in the bottom of the 7th and won the game.

You’re still pretty active in your career, too. What’s next for you?

I’m pretty excited about this, actually … We’re making the Pretty Woman Broadway musical. We get together in New York in June and we’re on our way! We’ll see how that goes. But making a Broadway show can be a slow process, so I may have time for a film during that time. It’s on my bucket list to make a film about senior softball. There’s a script, and we hope to do that eventually.

I’ll be there on opening night!

I’m hoping for a sequel to The Princess Diaries 2. I, ah, have a younger sister so I saw that one in theaters.

Somewhere they’re trying, Erik. About a month ago, Anne Hathaway comes into my office, puts her laptop on my desk, pushes four buttons, and there’s Julie Andrews live in Long Island! And we’re all having a little reunion and wishing Annie good luck with her new baby. Cute little boy. But it’s Disney’s call and they’ll announce if that ever happens.

There are a lot of loose ends in Genovia that need to be tied up.

Some people really think that’s a real place.  That’s a whole other audience! Young girls come up to me knowing Princess Diaries. More than anything, kids these days come up to me saying, “You were the devil in Hocus Pocus!” That’s my career to them.

One final question … you saw a really bad Northwestern football team when you were at school here. What’s your prediction for the upcoming season?

I think they’re looking good. Vitale graduated, but there are a couple of other guys … what’s the name of the quarterback?

Yeah, he’s the new guy. And Siemian is with the Broncos now. That running back, Jackson, he’s good. He can carry the ball. You guys used to have that chant, you know, “You’ll all be working for us” when they were losing.

Yes! Now that cheer’s not so important. They win! Back when I was in school we only had one great player, Sandy Sacks. He was an All-American left tackle. And he’s been in my last three movies because I stay in touch with him! He’s always an extra, wearing a Northwestern N in the background. He’s in Mother’s Day, right behind Jennifer Aniston. I always have someone in the background wearing a Northwestern hat or sweatshirt or something.

In Happy Days you had a Northwestern pennant on the wall of Arnold’s.

Richie Cunningham went to Northwestern, yes. And I still have that pennant! So we try to keep Northwestern going.

Well thank you so much for taking time out of your schedule to talk with us, and let’s hope that the football team does better than 1-11 next fall.

Oh, they’ll do much better than that!

Mother’s Day is in theaters now.