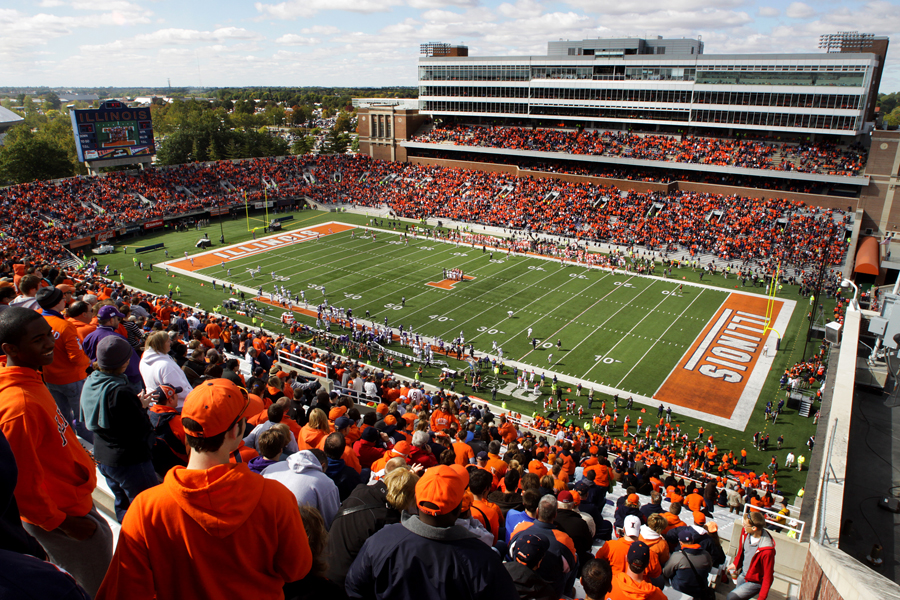 Offense: After missing a bowl game by one win, the Illini started shaking things up by bringing new head coach Lovie smith back into the collegiate fold for the first time since 1995 when he coached the DBs at Ohio State. He’s big on ball protection and wants to make that a focal point for quarterback Wes Lunt as well as tailback Ke’Shawn Vaughn, who led the team with 723 rushing yards in 2015. While Vaughn was the primary back for the Illini last season (157 carries), Josh Ferguson served as a versatile player who got 129 carries last year. The next most by a back were 25 carries from then-freshman Chayce Crouch. He’ll have to step up along with junior Kendrick Foster for that backup back spot. The loss of WR Geronimo Allison to the Green Bay Packers will be felt, as he had a team-high 882 receiving yards. But Malik Turner has proven he can be a threat, as well as Desmond Cain, who is looking to capitalize on his breakout freshman season in which he racked up 492 yards, averaging 9.3 per carry. An unfortunate blip on the radar this spring came in the form of a right ACL tear for receiver Mike Dudek, the same injury that sidelined him for his sophomore season in April 2015. Dudek broke the team’s freshman receiving record in 2014 with 1,038 yards. While this does take away some depth in the Illini receiving corps, as was mentioned, there are quite a few guys like Cain and Turner who can fill the void.

Defense: The front four for Lovie Smith’s squad is spearheaded by senior defensive end Dawuane Smoot, who registered a team-high 8 sacks in 2015. He’ll be responsible for leading the defensive effort for the team, along with Cal graduate transfer Hardy Nickerson, who led the Golden Bears with 112 tackles last year. Senior safety Taylor Barton picked up four interceptions last season and will be a big part of a secondary that lost three starters over the offseason. Junior Jaylen Dunlap will most likely fill one of those spots, with Darius Mosely a good bet to start.

Special Teams: The Illini lost one of the best returners in school history in V’Angelo Bentley to graduation, and no replacement has been named yet. Look out for updates from training camp for news on that front. Punter Ryan Frain is looking to improve his game after averaging 40 yards per punt in his first year as a starter. With kicker Taylor Zalewski gone, senior David Reisner and incoming freshman James McCourt will compete for the starting spot this year. Reisner only hit 6 of 11 field goal tries in 2014, and didn’t get a shot at a kick all of last year, so look for McCourt to pounce on this and take the starting spot for Illinois.

Outlook: Lovie Smith could’ve chosen a better year to come back to coach Illinois. His schedule consists of brutal tests against Michigan and Wisconsin away, and North Carolina, Michigan State and Iowa at home. Heck, even a pesky Minnesota team could make for an interesting homecoming Saturday at Memorial Stadium. Not many expect them to make a bowl appearance this year in light of such a schedule which likely promises at least six losses. If they want to return to postseason play, they’re going to have to pull off an upset or two, and no two players will be more important in that effort than Wes Lunt and Dawuane Smoot.

Best Case: Wes Lunt improves in this third year as a starter under the tutelage of Lovie Smith, keeps the ball out of opposing defenders’ hands, and Smoot and Nickerson put up top-level numbers. The Illini are able to scoop up close wins against Minnesota and Nebraska en route to a 6-6 season and go to a bowl game for the first time since losing the Heart of Dallas bowl in 2014. This will also have to be coupled with no major injuries to keep Illinois’s lack of depth from becoming an issue.

Worst Case: Lovie Smith has a rough first year as another long fall unfolds in Urbana-Champaign and the team stumbles to a sub-par 4-8 mark on the year thanks to Smoot’s lack of support from the rest of his defensive line and Dunlap and Mosley’s inability to effectively fill out the holes left in the Illini secondary.