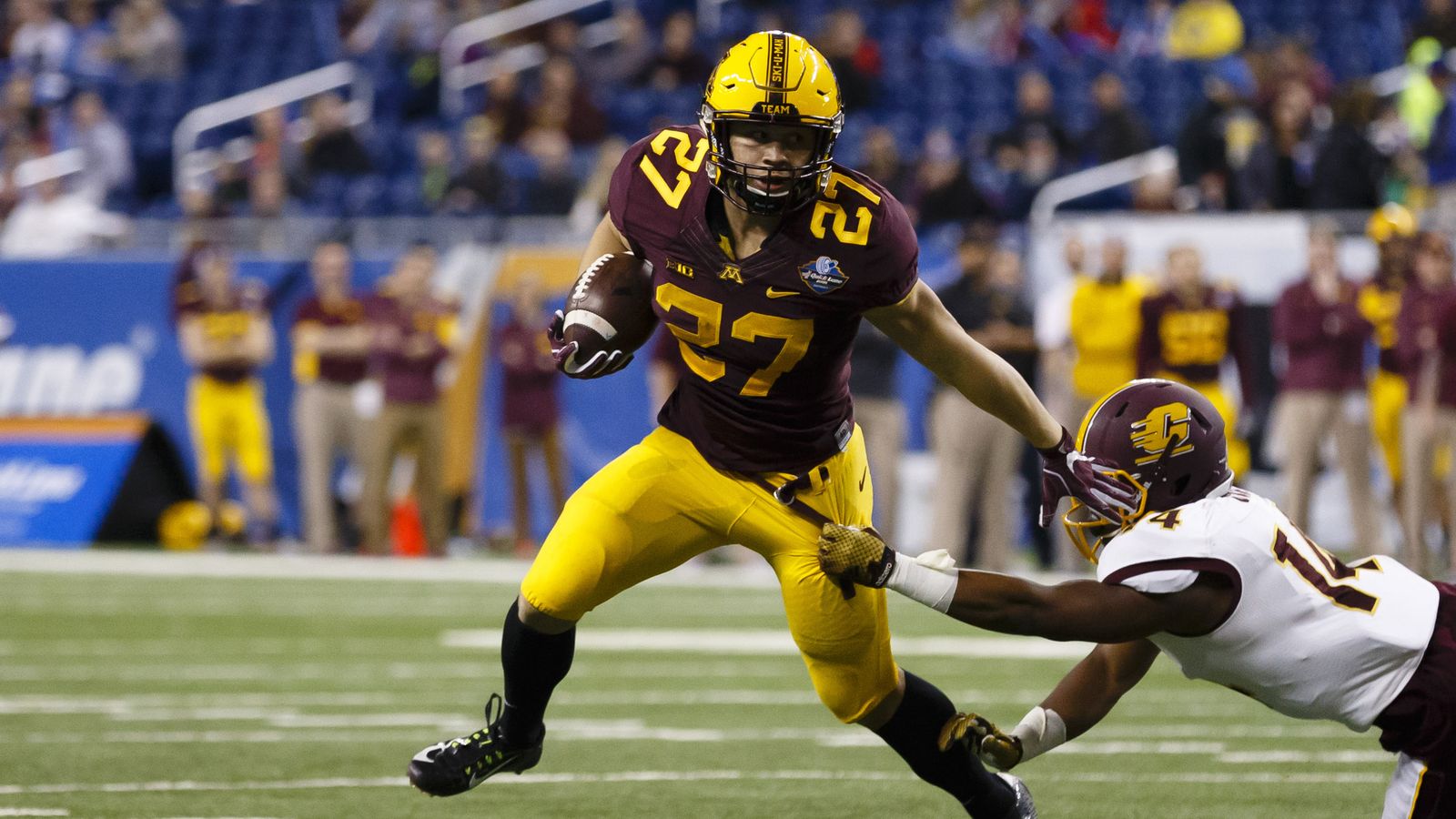 Offense: The 2015 Golden Gopher offense was a stagnant one, finishing 12th in the Big Ten in yards per game. Tracy Claeys wasted no time in making an effort to boost the offensive output. Less than three weeks after being named Minnesota’s new head coach in November, Claeys fired offensive coordinator Matt Limegrover and quarterbacks coach Jim Zebrowski following the end of the regular season. Claeys then tabbed Louisiana-Lafayette’s Jay Johnson as his new offensive coordinator, and perhaps Johnson will carry his misdirection-heavy spread offense from Ragin’ Cajun country to the Land of 10,000 Lakes.

Given the Gophers’ offensive personnel, the offensive scheme will require some tweaking. Dual-threat quarterback Mitch Leidner, who rushed for 6 touchdowns and almost 400 yards last season, returns for his senior campaign. However, the Lakeville, Minnesota, native is coming off left foot surgery and doesn’t have the throwing accuracy of a quality Big Ten quarterback.

The Gophers also return their leading rusher, Shannon Brooks, and second leading receiver, Drew Wolitarsky, but without KJ Maye in the mix, this team is missing an explosive offensive threat. And much like Northwestern, Minnesota was already lacking in the big play department. The offensive line returns most of its starters, but the starting left tackle spot is still up for grabs and the existing group of bruisers up front will have to take big strides to win the line of scrimmage in conference play.

Defense: The backbone behind Jerry Kill’s rebuild in the Twin Cities was the defense. The Golden Gophers finished 4th and 6th in points allowed per game in the Big Ten in 2013 and 2014, back-to-back eight-win seasons. And Minnesota would not have extended their bowl berth streak to four consecutive seasons last year without a defense that was middle of the road in the Big Ten.

Returning the defense to 2013 form will be no easy task for Claeys. The secondary, easily Minnesota’s strongest position group in 2015, loses three starters: leading tackler Antonio Johnson and a pair of NFL prospects in cornerbacks Eric Murray and Briean Boddy-Calhoun. Adekunle Ayinde and Jalen Myrick will have to step up for the secondary to be half as good as it was last season.

Up front the Gophers have more stability. A couple of key pass rushers, Alex Keith and Theiren Cockran, have departed, but Steven Richardson and Andrew Stelter form a big wall up the middle. Richardson posted eight tackles for loss, including 3.5 sacks, last season. The linebacking corps brings back Jack Lynn and Cody Poock, two of the team’s top four tacklers, so there are not many glaring issues in the front seven. Development of the pieces in place could push Minnesota’s defense to an above average Big Ten unit.

Special Teams: Ryan Santoso was a top notch kicker last season, knocking through 17 of 21 field goal attempts, and he returns for his junior season. The 6-foot-6 Lou Groza Award semifinalist was perfect from inside 40 yards in 2015 and has a long of 52 yards while at Minnesota. However Peter Mortell, a three-year starter who averaged a program-best 44.0 yards per punt over his career, has graduated. The self-proclaimed “Holder of the Year” actually signed with the Packers in April, so expect whoever grabs the punting and holding duties to be a significant downgrade. Be sure to keep an eye on Jalen Myrick too, whose blazing speed could pay dividends in the kick return game.

Outlook: In Claeys’ first full season at the helm, the goal should be to simply keep the bowl streak alive. Last year the Gophers got lucky, earning a bid to the Quick Lane Bowl with a 5-7 mark. In 2016, the schedule softens up and a lot of experience returns. Minnesota should go undefeated in the non-conference slate, although Oregon State and Colorado State – two seasons removed from a 10-3 campaign – could pose some issues for MN. With the likes of Rutgers, Illinois, Indiana and Purdue all on the Gophers’ schedule, plus the absence of Ohio State and Michigan State, a seven- or eight-win season is not out of the question.

Best Case Scenario: The offensive line develops and protects an improved Mitch Leidner under center while the defense finds legitimate replacements in the secondary. Minnesota takes advantage of an incredibly weak conference schedule to go 9-3.

Worst Case Scenario: A change in scheme cripples an already unexciting offense, and the running game falters behind a shuffling o-line. The talent on the defensive front plateaus, and the Gophers slide to another 5-7 season with just a pair of conference wins.