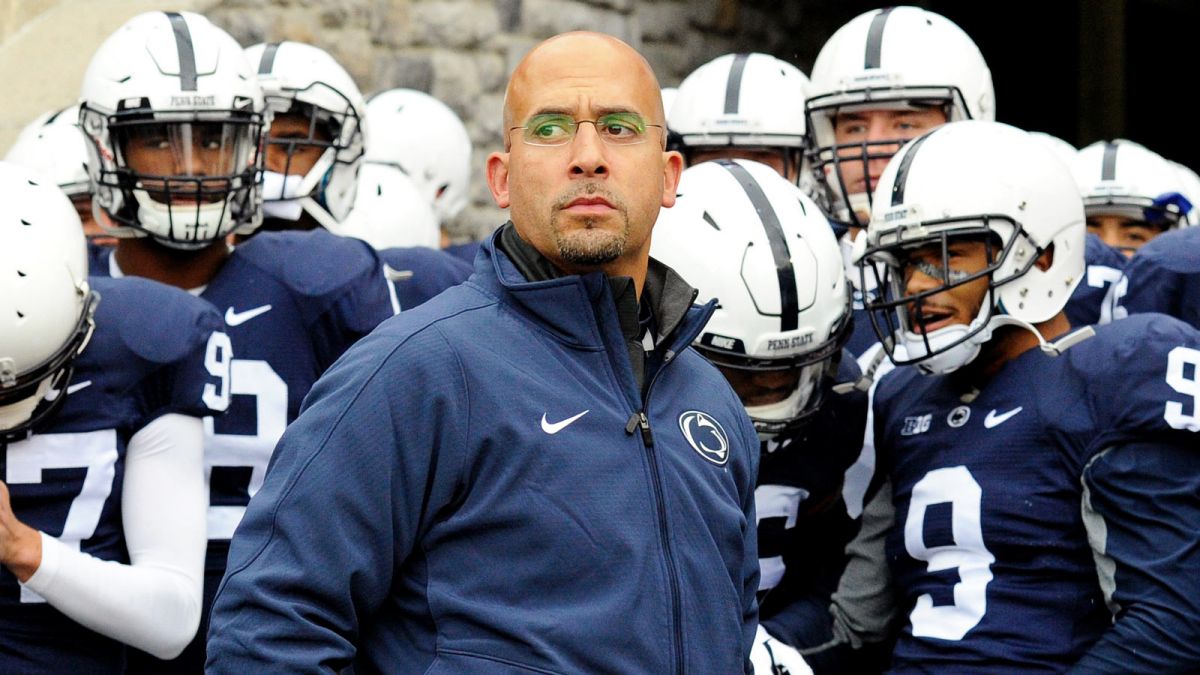 James Franklin and Penn State will look to bounce back after yet another 7-win season in 2015. Photo Credit: Rich Barnes, USA Today Sports

2016 will prove to be an important year for the Penn State Nittany Lions and their head coach James Franklin. Penn State has not won more than 7 games during the Franklin tenure, and 2016 will bring a big shuffle in their coaching staff. Defensive coordinator Bob Shoop and offensive line coach Herb Hand have both left the program and former offensive coordinator John Donovan was fired midway through last season.

For better or worse, QB Christian Hackenberg left the program early and was drafted by the New York Jets in the second round of the NFL draft. Though he was highly touted and had great freshman campaign, his years under James Franklin were underwhelming. Hackenberg seemed to stagnate as a player and his completion percentage dropped each year in college. Still his departure means Penn State will have to fill a hole at the most important position on the field.

Dual threat quarterbacks Trace McSorley and Tommy Stevens will battle for the top spot on the depth chart. McSorley looks to be the front runner for the position, and is the only quarterback on the roster who has seen time on the field as he filled in for an injured Hackenberg during last season’s TaxSlayer Bowl.

Whoever the starting QB will have two 2nd  team All-B1G performers who they can rely on. Starting running back Saquon Barkley rushed for 1,076 yards and 5.9 Yards Per Carry in just 11 games during his freshman season. His rushing yards set a single season record for any Penn State freshman.  Chris Godwin finished second in the big ten with 1,101 receiving yards and had 5 games with over 100 yards receiving. DaeShon Hamilton caught 82 passes in 2014 but his production dropped to just catching 45 passes this past season. If he can produce like he did the year before, the Nittany Lions will have three formidable threats to score consistently.

The key for this offense improving will be their offensive line stepping up. Their line gave up 44 sacks last year and never looked to be in sync with each other. To help solve this problem new offensive coordinator Joe Moorhead is employing an offense the puts less stress on the line. The new scheme will emphasize a more up-tempo and quick offense. This unit gelling will be key to Barkley’s continued growth and taking stress of their next quarterback.

The strength of the Nittany Lions last season will be one of the major concerns in the upcoming season. Defensive tackles Anthony Zettle and Austin Johnson along with defensive end Carl Nassib were all drafted, and leave a huge void along the defensive line. The three led a defense that only allowed 21.8 points per game and had 46 sacks during the 2015 campaign.

The next defensive line will be thin in terms of depth but players such as Garret Sickels, Evan Schwan and Parker Cothren will be asked to lead the line. The linebackers will be led leading tackler Jason Cabinda, who recorded 98 combined tackles last year. Linebacker Nyeem Wartman-White will also be returning from injury after a season ending knee injury in the 2015 opener. As well, Wartman White recorded 75 tackles the year before and will be a solid addition alongside Cabinda and Brandon Bell.

In the secondary Grant Haley is a clear starting corner and John Reid will likely fill the other starting role. Junior Marcus Allen and senior Malik Golden are veterans that will provide stability on the back line.

The 2016 season for the Nittany Lions will be swayed by their ability to play in the trenches. The offensive line was subpar last season and needs to be stable in order for their future quarterback to be successful and create more space for RB Saquon Barkley. The defensive line needs to replace three NFL draftees and find depth.

The schedule for Penn State will be tough to navigate. They will face 8 bowl teams and have to go up against Michigan, Michigan State, Ohio State and Iowa. The non-conference part of the schedule will be vital as a bad start would cripple the Nittany Lions.

The case scenario for Penn State features a fast start and great performances at home. If Penn State can head into a matchup with Ohio State 5-1, it could be an intriguing matchup against the Buckeyes. Win or lose, if Penn State thump Purdue the next week and beat an Iowa team at home who lose 21 seniors, the Nittany Lions would head into a home matchup with Michigan State with only two losses and like end their regular season with a 9-3 clip. Add a bowl game victory and the best case looks like a 10-3 season.

In Penn State’s worst case scenario, the team does not take advantage of opportunites in non-conference play. Losses to Pitt and Temple could be in store, and a loss against Michigan would then be inevitable. Another loss could ensue against Minnesota leaving Penn State 2-4 going in their bye week. Losses against Ohio State, Michigan State and Iowa would seem likely and Indiana could be another toss up game. The Worst case for Penn State seems to be 4-8.