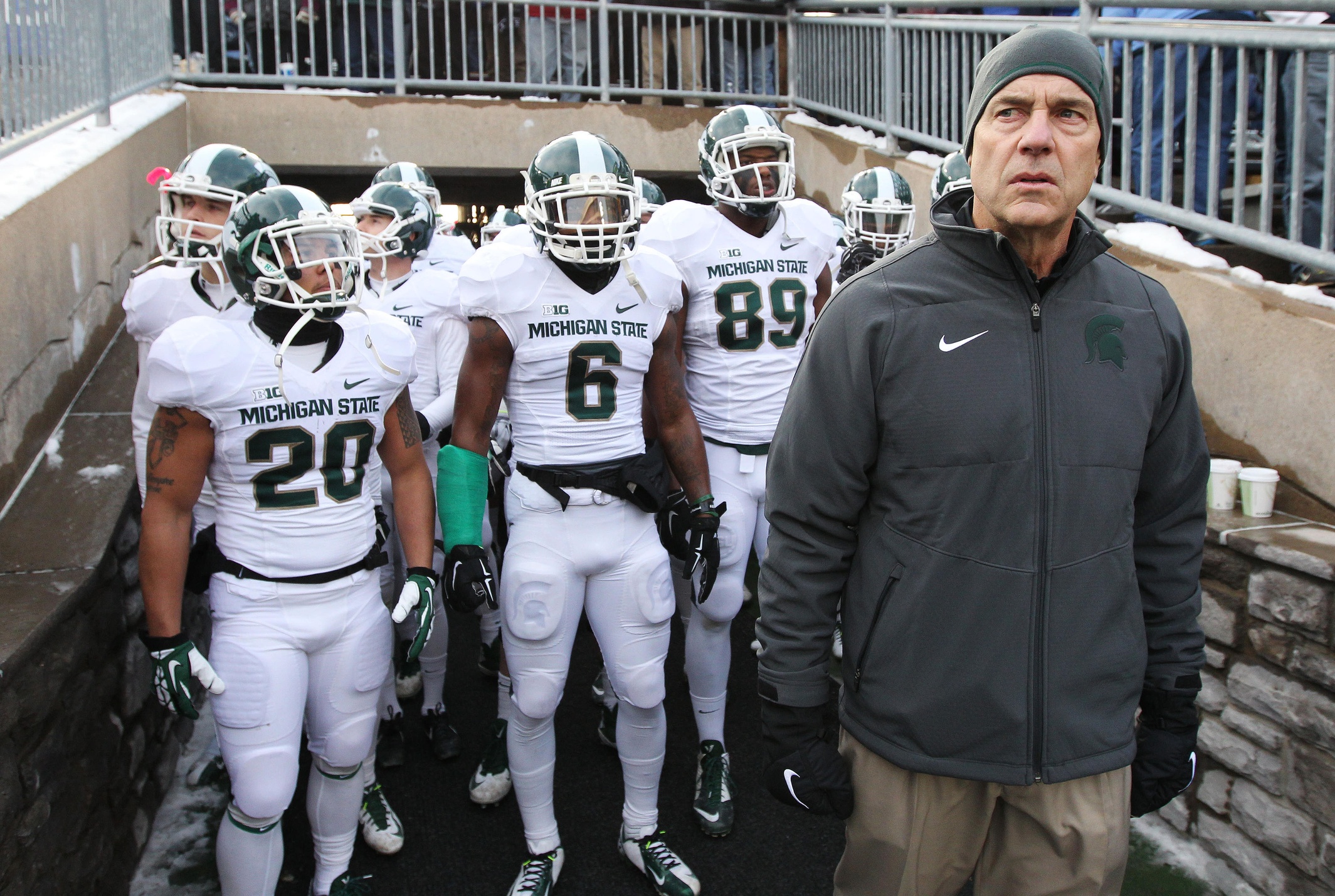 Can the Spartans continue their reign atop the Big Ten East without the winningest quarterback in school history? Photo Credit: USA Today

The Michigan State Spartans had one of their best seasons in program history, as after narrowly topping Michigan and Ohio State to win the Big Ten East, the Spartans beat Iowa in Indy to earn a berth to the College Football Playoff. Their spectacular run ended there however, as they were destroyed by a far superior Alabama team, 38-0.

Heading into the 2016 season, the Spartans will certainly regress, especially without the winningest quarterback in school history, but with Mark Dantonio at the helm, Michigan State will still be among the Big Ten’s elite, competing for the Big Ten East crown and a right to play in the Big Ten Championship with the likes of Ohio State and Michigan. The question is, do they have enough to beat either the Wolverines or Buckeyes?

With their starting quarterback, Connor Cook, and leading receiver, Aaron Burbridge, off to the NFL, the Spartans’ offense will have a tall task ahead of them as they look to improve upon an offense that ranked in the top half of the Big Ten.

Senior Tyler O’Connor, junior Damion Terry, and redshirt freshman Brian Lewerke will compete for the starting job, but O’Connor, who started the 17-14 win at Ohio State in Cook’s absence, looks to be the favorite to take over the reigns under center. Neither O’Connor nor Terry or Lewerke have much experience under center though, so Michigan State will be breaking in an inexperienced QB under center for the first time since Cook took over under center in 2013.

But whoever starts as QB for the Spartans will have the benefit of an impressive rushing attack, as all three of the Spartans’ leading rushers, including LJ Scott, return to East Lansing. Scott rushed for 699 yards on 146 carries last season, a 4.8-yard average, and will be joined in the backfield once again by Gerald Holmes and Madre London. The three-headed rushing attack should give the Spartans something to lean on while breaking in their new quarterback.

Having lost their top two contributors at the wide receiver position, the Spartans will again turn to R.J. Shelton, who will see a much bigger role this season for Michigan State. Josiah Price should see an uptick in receptions as well, while sophomore Felton Davis III, who caught just two passes last season, is expected to slide into a starting role. Freshman Cam Chambers and Donnie Corley will also contribute, but with a new QB under center, the Spartans will most certainly rely more on the running game.

With three linemen leaving for the NFL in Allen, Conklin and Donavon Clark, the Spartans have some holes to fill along their offensive line. The coaching staff might have to shuffle around some players to fill different holes, but the Spartans have the talent to replace their departed starters. The question is, how quickly will they mesh together and with whoever is under center?

After losing defensive coordinator Pat Narduzzi last season, the Spartans took a step back on defense, ranking No. 5 in the Big Ten in scoring defense. Michigan State’s run defense was superb last season, but it was their pass defense that really suffered without Trae Waynes, as they ranked 72nd nationally in pass efficiency defense.

But as Dantonio always does, the Spartans have reloaded on defense and should again be among the Big Ten’s best. Malik McDowell heads up the Spartans’ defensive line and is already being mentioned by scouts as a potential first-round pick in 2016. Losing Shilique Calhoun and Joel Heath will hurt, but with McDowell and lots of young talent, the Spartans should be fine.

In the back of the front seven, Michigan State will benefit from the return of Ed Davis, who comes back after missing the entire 2015 season with an injury. Davis is joined by Riley Bullough in what should be an impressive Spartan linebacking corps.

The “No Fly Zone” wasn’t stopping many passing attacks last season, as opposing quarterbacks threw for 285+ passing yards seven times, but with three returning starters, the Spartans secondary should be much-improved in 2016.

The Spartans return both their starting kicker and punter in Michael Geiger and Jake Hartsbarger and their leading kick returner, R.J. Shelton. With Shelton playing a bigger role in the receiving game, a younger wideout might step into the kick returner role, but the Spartans special teams unit should have another great year. It might be tough though to top its 2015 highlight reel, which included a game-winning field goal at Ohio State and the miracle punt block and return against Michigan.

The Michigan State Spartans have a tall task ahead of them in replacing Connor Cook, the winningest quarterback in school history. Last time their starting QB left for the NFL – Kirk Cousins – it took the Spartans a year to figure themselves out as they finished 7-6 before Cook took over the next year. But as long as the Spartans have Dantonio at the helm, they’ll remain among the top teams in the Big Ten East and the country. A road game at Notre Dame will be tough, but the Spartans luck out in-conference, getting to face both Michigan and Ohio State at home. A win in either of those games would go a long way to positioning the Spartans for another Big Ten title.

Best Case: Tyler O’Connor makes a quick transition under center and becomes the next in line of top Spartan QBs. With Scott, London and Holmes, the Spartans sport a three-headed monster at RB while they’re able to figure out the right combination to replace Conklin, Allen and Clark on the offensive line. The 2016 Spartans’ defense returns to its top-notch form and Michigan State silences critics as they top Michigan and Ohio State at home to win the Big Ten for the second-straight year and claim a second-straight College Football Playoff berth.

Worst Case: The Spartans can’t find Connor Cook’s replacement, while the offensive line is a constant shuffle trying to replace Conklin, Allen and Clark. Michigan State’s defense is good, but not great and the “No Fly Zone” continues to struggle. The Spartans drop games to Ohio State and Michigan at home and finish third in the Big Ten East, missing out on a top tier bowl for the first time since 2012.