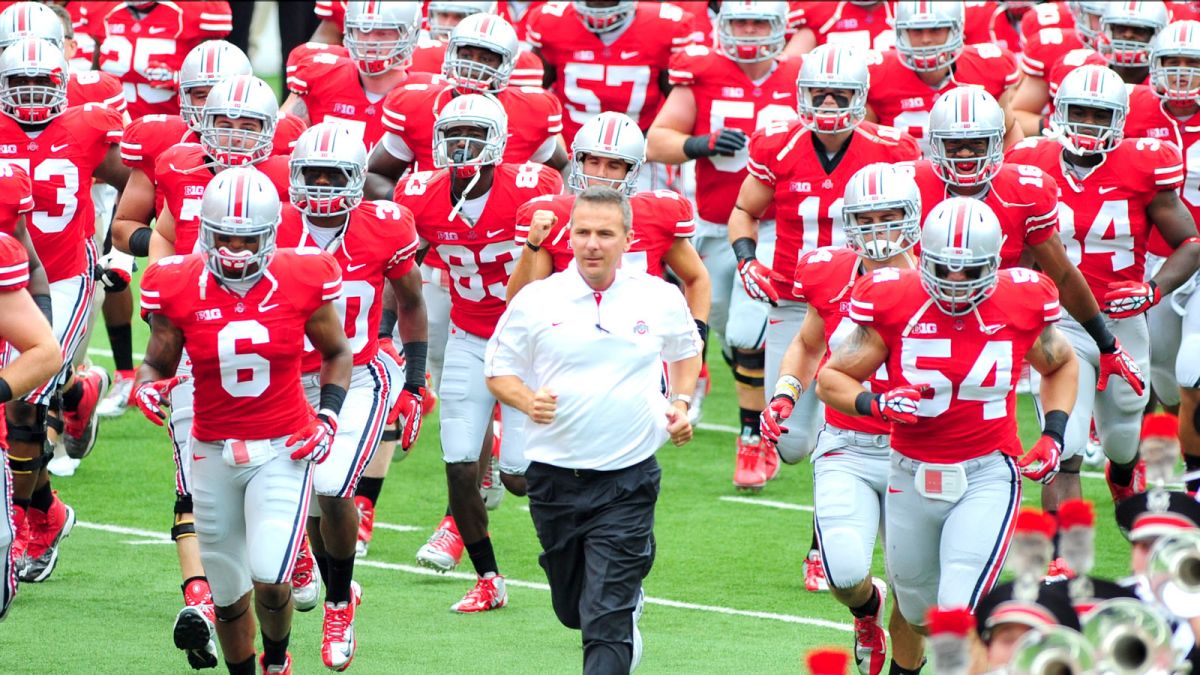 Can Urban Meyer and the Buckeyes return to the College Football Playoff in 2016? Photo Credit: Fox Sports

The unanimous No. 1 team in last year’s preseason AP poll, The Ohio State University spent the first ten weeks atop the national rankings. The Buckeyes seemed well on their way to an undefeated season and a chance to defend their 2014 championship after starting 10-0. But a Michael Geiger field goal as time expired put an end to their undefeated season at the hands of Michigan State, and dashed their hopes of a playoff berth. However, OSU proved its worth with a rout of Notre Dame in the Fiesta Bowl and finished fourth in the season’s final rankings.

But a historic draft class picked off nearly the entire 2015 Buckeyes team, with twelve players taken in the first four rounds. They return just six total starters from last season, three on offense and three on defense. And yet, this is still likely the most dangerous team in the Big Ten. Ohio State settles for nothing less than a championship, and they hope to bounce back from a disappointing (by Ohio State standards) end to last season.

For the first time, redshirt junior quarterback J.T. Barrett will have the starting quarterback job all to himself. Two years ago, Barrett showed what he could do taking over for an injured Braxton Miller, leading Ohio State to an 11-1 record. But Barrett went down against Michigan, paving the way for Cardale Jones to lead Ohio State to the first-ever College Football Playoff Championship. Last year, after Miller moved to wide receiver, Barrett and Jones had a quarterback competition that lasted pretty much the entire season, alternating starts based on performance, injuries and a one-game suspension to Barrett for a DUI. Now both Miller and Jones are off to the NFL, leaving Barrett alone with the starting job.

Barrett was efficient in his playing time, completing 63 percent of his passes with 11 touchdowns and just four interceptions, while adding 682 yards and 11 touchdowns on the ground. But Barrett will lose his top three weapons to the NFL. This year the Buckeyes will likely have redshirt sophomore Noah Brown and redshirt senior Corey Smith starting at receiver, with just 26 career receptions between them. Redshirt freshman Torrance Gibson, a super athletic quarterback-turned-receiver, will also compete for playing time.

At running back, Ohio State loses Ezekiel Elliott to the Dallas Cowboys, who grabbed him with the fourth overall pick. Elliott will likely be replaced by redshirt freshman Mike Weber, with junior Bri’onte Dunn behind him. Two of the starters from OSU’s strong offensive line are returning, but true freshman guard Michael Jordan (not that guard Michael Jordan) may get a starting gig; whoever is the starting back will likely have a strong season.

Urban Meyer runs Ohio State’s offense through the spread attack he helped popularize. But unlike other college teams, the Buckeyes use many pro-style zone and gap-blocking schemes. Last year, Meyer used running back Elliott heavily in the passing game with check downs and slip screens, and they expect to do the same with this year’s backs. They use a west-coast passing scheme, with Barrett always a threat to run.

Ohio State ranked tenth in the FBS in total defense last season, third in the Big Ten behind Wisconsin and Michigan. But three of their players went in the Top 20 of this year’s draft, and they return just three starters from last year. Meyer runs a famous pro-style 4-3 defense.

On the defensive line, the Buckeyes lost two time All-American defensive end Joey Bosa, who went third overall to the San Diego Chargers. (Sensing a theme yet?) Tyquan Lewis and his eight sacks return to the line, and on the opposite side will be junior Sam Hubbard.

Linebacker Darron Lee got drafted at No. 20 by the Jets, but Ohio State’s leading tackler Raekwon McMillan will return for his third season. In the secondary, OSU lost Eli Apple to the Giants at No. 10, but keeps CB Gareon Conley, who started all 13 games with Apple last season.

While the rest of the roster deals with massive turnover, OSU’s special teams remain mostly the same as last year. The kicker for the Buckeyes will be junior Sean Nuernberger, who set a B1G record for points his freshman year. Nuernberger is an impressive 106 for 106 in his career on PATs, but has made just 66.7% of his field goals; he split kicking duties with graduate student Jack Willoughby last season when both failed to consistently make field goals. Senior Cameron Johnson returns at punter, with a 44.3 career average in yards per kick. And returning kicks will likely be Curtis Samuel, who averaged 23 yards per return last season.

Ohio State has a lot of work to do to replace its historic draft class – arguably the best in the modern era. But nobody is better able to live up to that than Urban Meyer, and Ohio State should have no problem becoming one of the top teams in the Big Ten. The Buckeyes may end up as good as or even better than they were last season.

Best Case: Urban Meyer manages to put together a team as good as any other in the nation, and captures the huge talent level that the Buckeyes have. They win a tough September road game at Oklahoma, run the table in the Big Ten, and emerge as National Champions for the second time in three years.

Worst Case: OSU can’t recreate what it had last season after losing so many players, and is unable to compete with the best teams in the Big Ten, losing tough matchups on the road against Oklahoma, Wisconsin and Michigan State, and losing at home to Michigan and maybe even Northwestern (hey, I can hope!), finishing the year at 8-4.