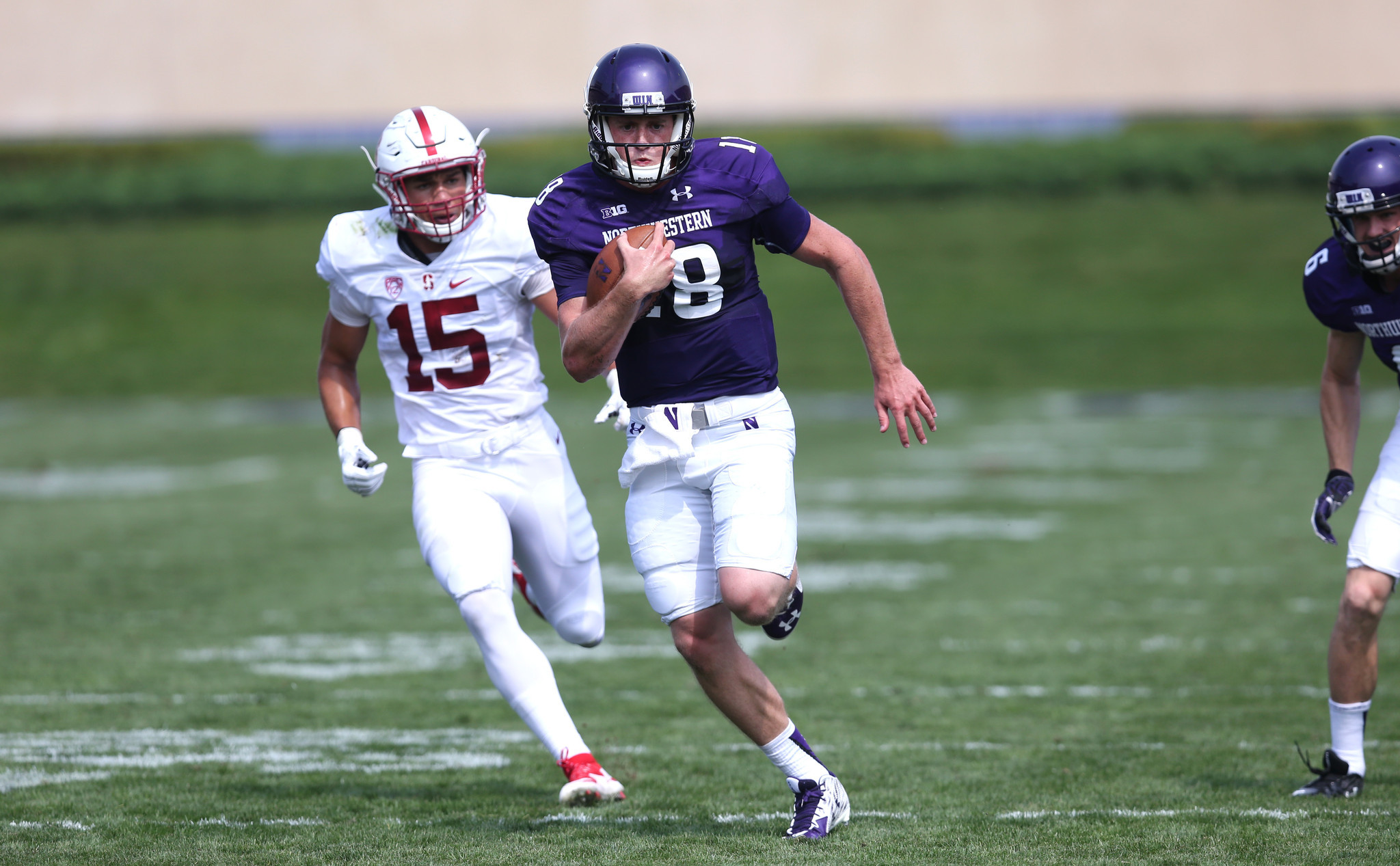 Can Clayton Thorson take command of the Wildcats’ offense in his second season under center? Photo Credit: The Chicago Tribune

At the most important position on the field, there is little doubt about who will get the starting nod for the Wildcats, however, what Wildcats’ fans can expect from the redshirt sophomore is unclear. In 2015, Thorson’s stats were very poor. His completion percentage was barely above 50% and he threw two more interceptions than he did touchdowns. Thorson’s total QBR of 44.0 was 103rd in the nation and was just about half of Arkansas’ Brandon Allen. Despite these poor statistics, there are reasons to expect a stronger 2016 campaign.

One factor has nothing to do with Thorson: the offensive line. The offensive line was constantly banged up and nearly every lineman was forced to miss significant time last fall, so more stability up front should help Thorson.

It is also important to remember that Thorson did have moments of brilliance last fall. If Thorson can change the rare to the usual, the sophomore quarterback has a bright future under center.

The 42-yard touchdown run against Stanford proved that Thorson’s legs are capable of beating defenders. Weeks later, Thorson made a beautiful, 37-yard touchdown pass to Dan Vitale in Lincoln, Nebraska to lead Northwestern to victory. These are the types of plays head coach Pat Fitzgerald will be counting on his quarterback to make this season.

Barring an injury or horrific play, NU’s backup quarterbacks won’t see much playing time. Alviti is the logical first man off the bench, but the sophomore has only completed one pass in his collegiate career.

The upside for Nortwestern’s quarterbacks is that there is a clear starter who will benefit from this role. With a full year of games and practices behind him, there is no reason to believe Thorson will not be a much better player this season. By going 10-2 in the regular season and playing in the Outback Bowl vs. Tennessee, Northwestern and Thorson got an extra month of practice that could prove invaluable this upcoming season. Thorson came to Evanston as the sixth-best dual-threat quarterback in the class of 2014 and will look to validate that ranking this season.

The downside lies in the fact that it is no guarantee that Thorson will improve. Last year, it commonly felt like Thorson and the Northwestern passing game had to be dragged by the running game and defense to win 10 games. With the schedule this year including Iowa, Michigan State, Ohio State and Wisconsin, the passing game will not be able to hide.

While this likely will not be an issue, a potential problem for this position is its lack of depth. As previously mentioned, Alviti and Kubiuk have almost no experience between the two of them. When Thorson went down last season vs. Penn State, redshirt senior Zack Oliver threw for over 100 yards and was able to lead the ‘Cats to a victory. No one backing up Thorson this year has the experience Oliver brought to the position.

It almost feels silly to have to say this, but yes, Clayton Thorson is Northwestern’s key quarterback. Beyond that, it is widely agreed that Thorson is the key player on any side of the ball for the ‘Cats. Northwestern’s season will be very dependent on the play of Thorson.

The quarterback position, and Northwestern’s season as a whole, will come down to Clayton Thorson’s ability to improve as a passer, playmaker, and team leader. His performance last year will simply not cut it in 2016.