Posted on August 2, 2016 by Will Greer Leave a comment 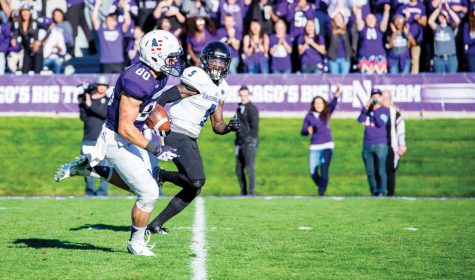 To be completely frank, it nearly defies logic that Northwestern was able to win ten times last season with one of the poorest wide receiving corps in the nation. In fact, out of 128 FBS teams, the ‘Cats ranked No. 120 in passing yards per game a year ago. And five of the eight teams that had fewer passing yards run the triple option.

Whether dropping almost perfect passes from Clayton Thorson, lacking the speed to get open against faster cornerbacks, or failing to help out a freshman quarterback and make the 50-50 catch, NU wide receivers time and time again last season proved that they were the biggest question mark on the team.

Luckily for them, 2016 is a new season, and because the ‘Cats will once again feature an elite defense and an extremely strong running game, the pressure on the receiving corps will be low, making any added production gravy.

The only direction to go is up. In all honesty, it would be extremely tough for NU receivers to be worse this season than last season. The ‘Cats had 920 total receiving yards last year from players listed as “WR” on the roster. That means yards from superbacks (Dan Vitale, Garrett Dickerson) and running backs (Justin Jackson, Solomon Vault, etc.) don’t count. And when you crunch the numbers, you see that NU receivers totaled just under 77 yards per game last year in support of the air attack. Ouch.

Not to be too pessimistic, but the 2016 batch of wide receivers has two more things going for them. First is the fact that they are largely a fresh batch. Northwestern loses all four of its primary wide-out threats from last season, including Christian Jones, Cameron Dickerson, Miles Shuler, and Mike McHugh. Perhaps Pat Fitzgerald will uncover some strong talent that simply didn’t get playing time last season because of an upperclassmen logjam at the top.

And secondly, the expectations for this unit shouldn’t be extremely high. Although it would be nice to have a more capable passing attack, Northwestern showed the country last year that a big time defense and strong running game are enough to keep you in ballgames and give your team a chance in the fourth quarter.

NU returns only one receiver that consistently caught passes last season, and the loss of superback Dan Vitale could magnify just how bad this wide receiving corps was last season. At times last year, Vitale was truly the only reliable pass-catching threat. And perhaps scarily for Pat Fitzgerald, NU does lose four of its main receiving weapons from last season. In fact, of the aforementioned 920 receiving yards from wide receivers last season, just 333 yards were gained by returning receivers. That’s a meager 36.2 percent.

Sure, Northwestern has a ton of promising talent, but many of the guys the ‘Cats will rely on for production haven’t been so highly called upon since high school. Austin Carr will likely be the ‘Cats’ primary weapon, while Solomon Vault (who made the change from running back to receiver in the offseason) will likely be the next biggest threat. If those two guys can’t meet or even exceed expectations, the ‘Cats are going to be in trouble.

While I normally take the road less traveled, Austin Carr is so clearly the answer here. Carr was second on the team a year ago with 302 receiving yards and showed signs of being able to help out his quarterback and make catches that other NU receivers simply failed to make last year. If Carr can step up his game and cement himself early on as Clayton Thorson’s top guy, the two could develop into a formidable threat.

It would be great for NU receivers to be better than they were last year, but with an awesome defense and a strong running game, their improvement is more of a recommendation than a requirement for Pat Fitzgerald’s squad.