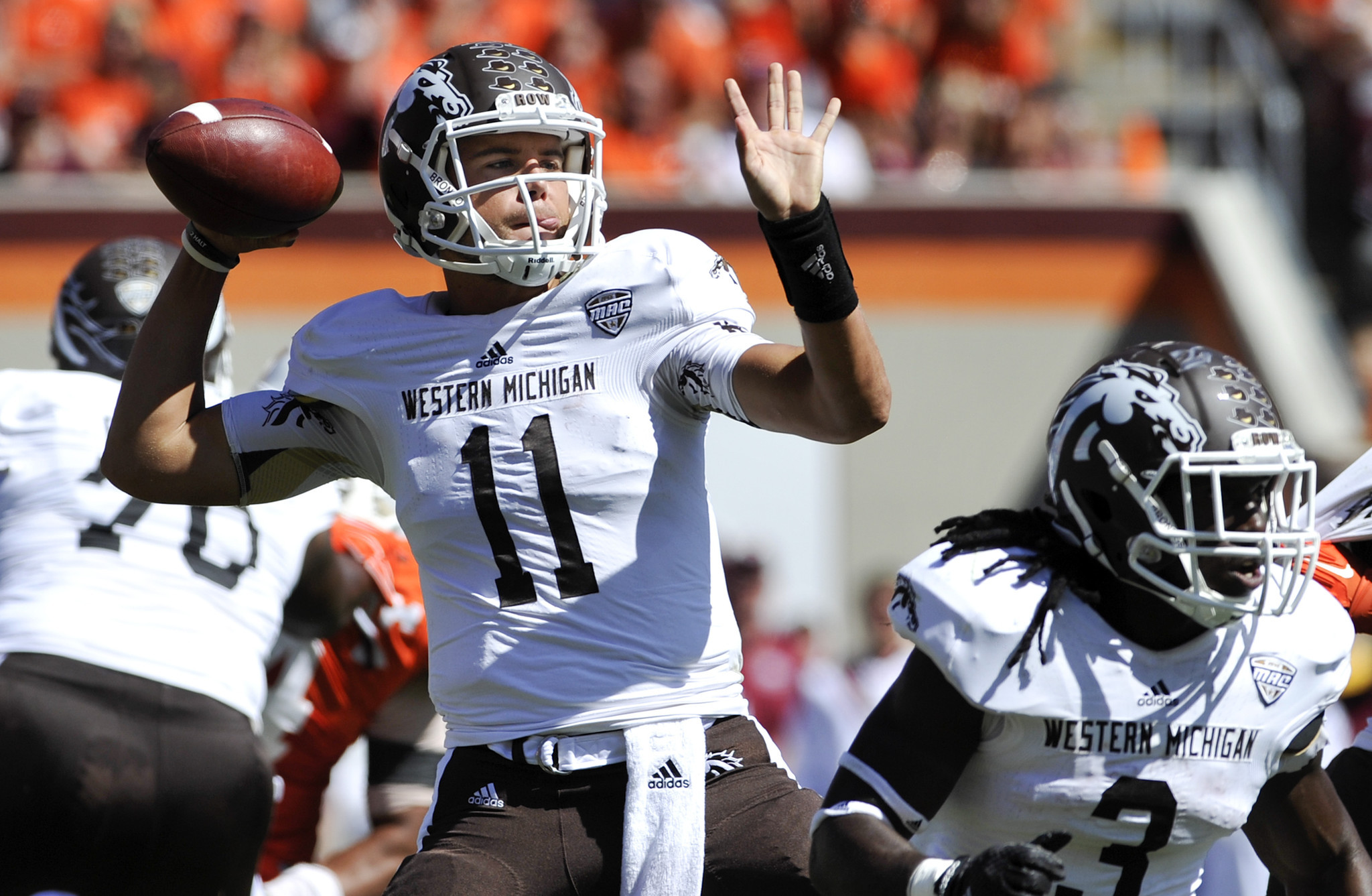 Western Michigan has been a team on the rise the last couple of years in the MAC, as head coach P.J. Fleck has been able to turn a team that went 1-11 in 2013 into a conference powerhouse. Fleck has managed to dominate the MAC in recruiting, and much of that talent is finally arriving. The Broncos played two Big Ten teams last season, losing to both Michigan State and Ohio State, and do so again in 2016, traveling to take on both Northwestern and Illinois in non-conference play.

Offense: Western Michigan’s offense is impressive. In 2015, the Broncos had the 17th best offense in the nation in yards per game and averaged 36 points per game. Much of that can be attributed to offensive coordinator Kirk Ciarrocca’s spread offense. However, like any great offense, they also have a solid quarterback under center. Senior Zach Terrell returns after throwing for 3,526 yards and 29 touchdowns last season. He also rushed for 270 yards, so he’s mobile as well. He was sacked 31 times last year, but the offensive line brings back four starters to hopefully solidify his protection. The O-line does lose First Team All-MAC lineman Willie Beavers, however.

At running back, the Broncos have a great one-two punch with 5-foot-7 speed back Jamauri Bogan and the physical 6-foot, 228 pound Jarvion Franklin. Last year, Bogan ran for 1,051 yards and 16 touchdowns AS A FRESHMAN. Franklin had 735 yards and 5 touchdowns. The Western Michigan running back stable is young and runs deep. Even third string running back LeVante Bellamy had 500 yards last year.

The biggest loss for the offense is superback Daniel Braverman, who caught 109 passes for 1371 yards last year and was targeted a whopping 142 times. It will tough to replace Braverman’s production, especially in week one when they face Northwestern. Only one other receiver had more than 20 receptions in 2015, and that was Corey Davis, who actually matched Braverman with 91 receptions for 1446 yards on 140 targets. So Terrell still has one of his go-to guys, but the Broncos are going to need someone else to step up for the offense to continue to be elite.

Defense: The Western Michigan defense is nowhere near as good as the offense. Consider this an ‘all-or-nothing’ type defense. They give up a lot of big plays, but also make a fair amount of their own. However, not a ton of that came from the pass rush, which was the weakest part of the defense. Defensive end Keion Adams returns–he had 10.0 TFLs and 5.5 sacks last year–but no one else with more than 1.5 sacks returns. They also lose two starters on the line, so don’t expect a ferocious pass rush come Week One.

The secondary is the team’s greatest strength, even though it loses two starters in Rontavious Atkins and Ronald Zamort, who combined for 107 tackles and 27 pass breakups last year. However, star safety Asantay Brown is back–he led the team with 79.5 tackles last year–as is cornerback Darius Phillips, who had 5 interceptions and 16 pass breakups. The Broncos also have a huge crop of incoming talent to fill the holes, including quite a few three-star freshmen and Malik Rucker, a transfer from Iowa. All in all, the defense can be beat deep, but will also force some three-and-outs and turnovers as well.

Special Teams: Western Michigan’s special teams are completely up in the air at this point. They lose their punter J. Schroeder as well as their place kicker Andrew Haldeman. Schroeder was a solid punter, but big-legged kickoff man Derrick Mitchell should be able to replace him at that position. Haldeman will be tougher to replace. He wasn’t the most accurate at times, but he hit five field goals of 40 or more yards last year. Right now the Broncos have four different young players who are listed at kicker and any one of them may emerge as the starter by the time the season starts. Darius Phillips will once again return kicks and punts; last year he averaged 23.3 yards per return and had one touchdown.

2016 Outlook: P.J. Fleck will look to continue Western Michigan’s growth in his fourth year as head coach, and this starts with two huge Big Ten games in the first three weeks. If the Broncos can steal one of those two and head into conference play at 3-1 they’ll be in great shape. They then face bitter rival Northern Illinois in Week Six for homecoming. That will be the game that decides the Broncos’ season. The MAC is by no means an easy conference to win, but Western Michigan has the talent to compete. Look for them to finally get past Northern Illinois and into the MAC championship.

Best Case: According to Brandon Fitzsimons of SB Nation’s MAC Blog Hustle Belt, the best case scenario for this team is 13-0 and a New Year’s Day bowl. While that is certainly possible, it would be quite the jump for the Broncos. A more realistic best case scenario would probably be around 11-2 with one non-conference loss and one loss in conference, but a victory in the MAC championship game and then a solid bowl game. This would be if the offense continues to improve and the defense is a tick better than it was last year. They’ll be able to put up points and that will be enough to lead them to a fantastic season.

Worst Case: The loss of Braverman is too much to overcome and the offense sputters, the defense continues to give up too many big plays and the Broncos go 1-3 in non-conference. Then they limp through MAC play, losing to all the good teams and finish the season at 5-7 and miss out on a bowl game.