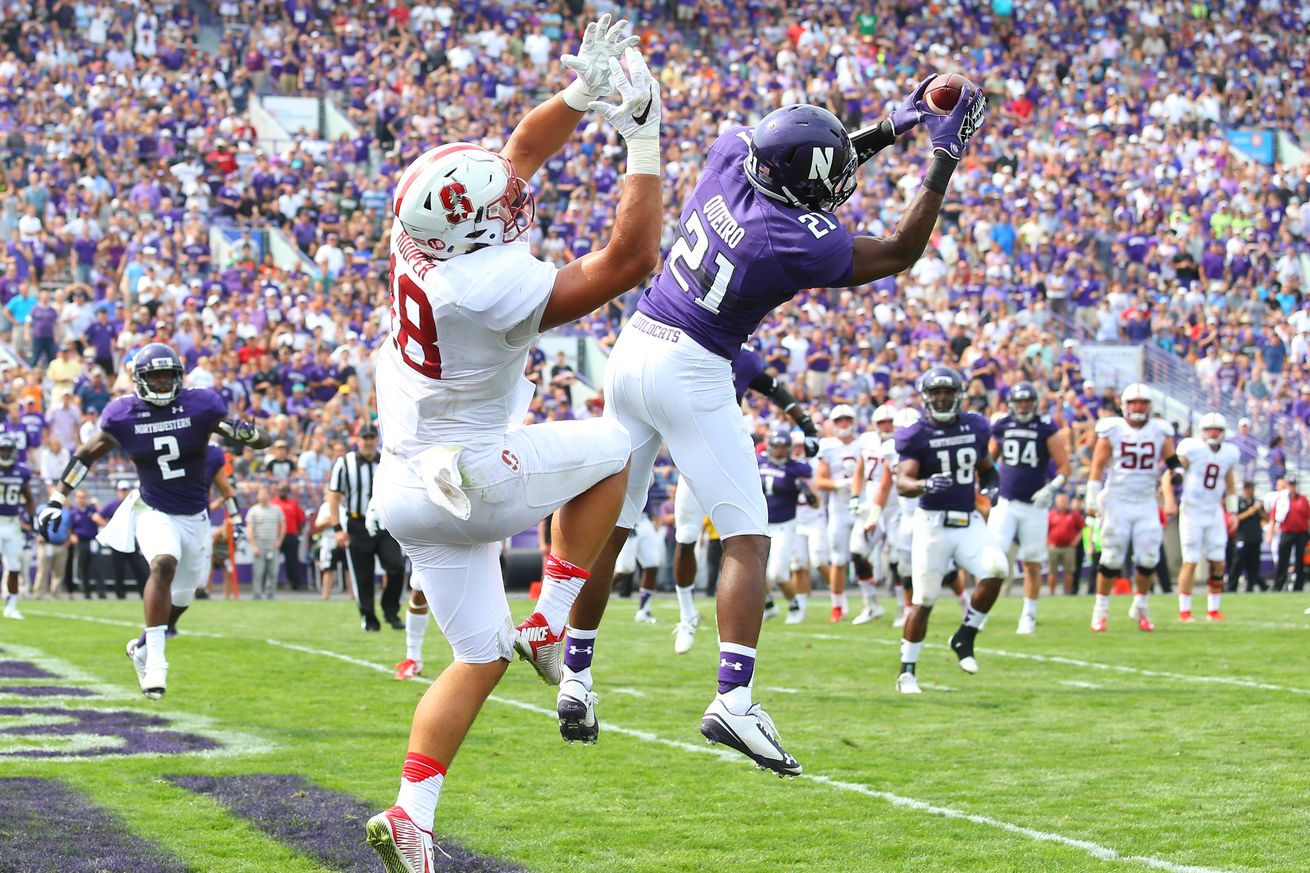 The Seahawks gave us the Legion of Boom. Michigan State dubbed their dominant secondary the “No Fly Zone.” When opponents come up against Northwestern, they’ll have to deal with the “Sky Team”—a unit that should be a major key in any Wildcat success this upcoming season.

The losses of long-time stalwarts in safety Traveon Henry and All-Big Ten corner Nick VanHoose, as well as a season-ending knee injury to presumed starter at corner Keith Watkins II mean the Sky Team comes into 2016 with a lot of questions to answer. Even with the losses, though, this unit comes into the new season as one of the most talented groups that Northwestern has.

Last season head coach Pat Fitzgerald called his defense perhaps the fastest he has ever coached. That emphasis on putting big time athletes on the field could be most evident in the Wildcat secondary.

Northwestern fans have already become accustomed to the big-play ability possessed by incumbent starters Matthew Harris and Godwin Igwebuike. Harris broke onto the scene in Evanston as a true freshman with dynamic ability as a kick returner, and has translated that athleticism into three productive seasons at cornerback. He has six interceptions and 32 pass-breakups as a Wildcat, along with his first touchdown on a pick-six last year against Eastern Illinois.

While Igwebuike doesn’t boast the same level of experience, he is perhaps the most dynamic player Northwestern has in the back end. Near the top of the list when it comes to the fastest Wildcats, he has used that speed each of the past two seasons to be a force against both the run and the pass. Every Wildcat fan can remember the three interceptions Igwebuike had in leading Northwestern to an upset of Wisconsin in Evanston two years ago. What many may not realize is that Igwebuike finished second on the team last year with 87 total tackles, while adding five pass breakups and 4.5 tackles for loss.

The newcomer to the Sky Team’s starting unit, junior safety Kyle Queiro, may prove to be the most athletic of the bunch. At 6-3 with a 6-8 wingspan, Queiro is easily the biggest defensive back that will see the field for Northwestern in 2016. He also possesses ball skills that not only gave him the choice to play wide receiver out of high school, but that he put into use with his game-sealing interception in last season’s upset against Stanford. While Henry was more comfortable playing near the line of scrimmage, Queiro (along with Igwebuike) will give the Wildcats two safeties that can play sideline-to-sideline in pass coverage.

Depth was already an issue before the loss of Watkins, and now the Wildcats will be forced to start a corner who lacks meaningful game experience. The early favorite to step in for Watkins appears to be sophomore Montre Hartage, though nothing is certain yet. Another intriguing option is sophomore Parrker Westphal. A former four-star recruit in the class of 2014, Westphal has struggled to find the field in his first two years on campus as he has dealt with a rash of injuries. However, at 6-1, he has the size to compete with almost any wide receiver. He also enrolled early as a freshman and has plenty of experience in Northwestern’s system.

Overall it will be a season full of debuts among back-up Wildcat DBs. Of non-starters, seven of the 10 other defensive backs on the roster are freshman, and only safeties Jared McGee and Tommy Odell saw the field in 2015. This is hardly an unfamiliar script for defensive coordinator Mike Hankowitz and defensive backs coach Jerry Brown, as an injury to Ibraheim Campbell forced Igwebuike into actions in his redshirt-freshman season, while injuries to both Harris and VanHoose saw Watkins assume a much bigger role than originally anticipated in 2015.

Quiero will have to step up if the Sky Team and Wildcats are to reach their full potential. While it is a bit much to expect anything game-changing out of whoever steps into the lineup opposite Harris, Quiero has the size, skill and experience to really change the complexion of the Wildcat defense. Northwestern has finished top five in the Big Ten in interceptions each of the past seven seasons, finishing first with 19 interceptions in 2013. With Quiero and Igwebuike patrolling the secondary, the Wildcats could match or exceed that number in 2016. Traveon Henry had only three picks in his entire Wildcat career, a number Quiero could surpass in 2016 alone.

The loss of Watkins is huge, but this is still the closest-knit group on the Wildcats’ roster, and that camaraderie could prove to be a major key in whether or not the defense can match—or exceed—their performance from 2015.