Posted on September 7, 2016 by Austin Miller Leave a comment 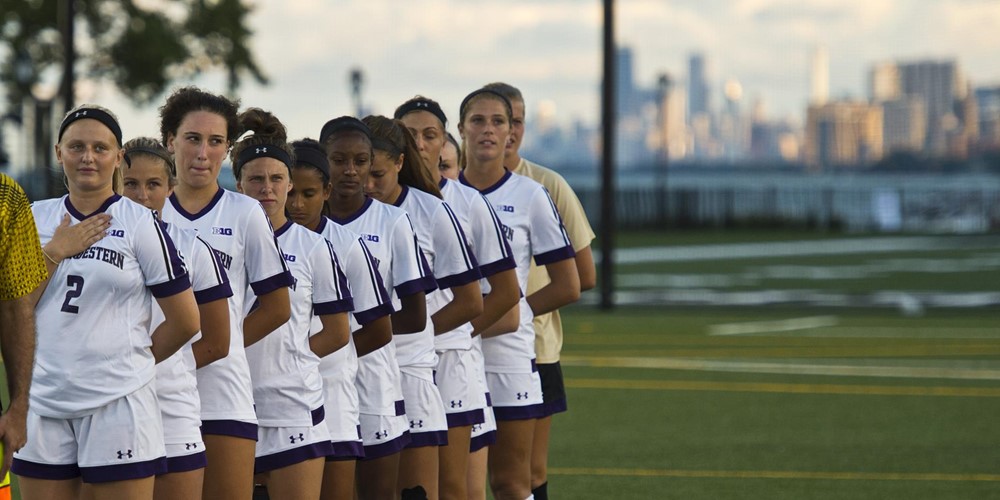 This weekend was a mixed bag for Northwestern athletics. While football fell to Western Michigan, and men’s soccer struggled on the road against Marquette, women’s soccer continued their winning ways, and field hockey picked up an impressive split against top caliber opposition. Let’s round it all up:

The 24th ranked Wildcats moved to 5-0 on the year after a pair of impressive wins against Indiana State, and Colorado State. Against the Sycamores on Thursday night, the Wildcats had 25 shots, and gave up just 0. However, it took until the second half for Northwestern to break the deadlock, but break it they did when Maddy Lucas fired one in off the post to give the ‘Cats a 1-0 lead. Kassidy Gorman scored after a nice turn to seal the 2-0 win for Northwestern. Against Colorado State on Sunday, Brenna Lovera opened the scoring in the first half with some nice play in the box and a clinical finish:

Brenna Lovera doing what she does best! Watch her do WORK for the #B1GCats! https://t.co/woQIVXc6Hp

The Wildcats picked up two more goals in the second half, one from Kourtney Scott, and one from Mackenzie Howe, and rolled to a 5-0 start.

While junior goalkeeper Lauren Clem wasn’t tested much in either match, the pair of clean sheets now gives her 26 for her career, the most ever by a Northwestern net minder.

The ‘Cats will be back in action tomorrow night when they host Indiana State, a match that can be heard live on WNUR.

The Wildcats more than held their own against tough opposition over the weekend, defeating 8th ranked Boston College 2-1, before falling to 4th ranked Duke 3-2 in OT.

Northwestern fell behind early against Boston College, but a pair of second half goals, one from Elena Curley, and the second from Kristen Mansfield, rallied the Wildcats for a 2-1 win. Mansfield’s goal came right as time expired, giving the ‘Cats a dramatic win against the Eagles.

Against Duke on Sunday, Pascale Massey and Saar de Breji scored, but the Blue Devils took the win 8 minutes into overtime.

The ‘Cats return home for the weekend, where they’ll play Ball State on Friday, and Colgate on Sunday.

Shane Davis’ hot start continued on Friday, as Northwestern rolled past Chattanooga, but the ‘Cats were defeated by a pair of A-10 foes on Saturday in Dayton, OH.

The ‘Cats swept Chattanooga behind an incredible hitting performance of .416, but had more difficulty in their Saturday doubleheader. Dayton and Northwestern went 5 sets in the first Saturday match, with the Flyers pulling out the tie-break 15-11, to hand the ‘Cats their first loss of the year. Then, just 20 minues later, Davis’ squad found themselves back on the court again. Xavier swept Northwestern in the second half of the doubleheader, sending the Wildcats to 4-2 on the year.

Next up for Northwestern is a trip to Nashville, TN where they’ll face Virginia Tech and Lipscomb on Friday, before closing out the weekend on Saturday against Mississippi.

Northwestern performed well in defeat against highly ranked Denver on Friday, then dropped their first road contest of the year to Marquette on Labor Day.

All the goals against the Pioneers came in a 6 minute second half flurry that saw Denver take the lead, before Jeffry Hopson converted from the spot to level the scoreline. However, the equalizer didn’t stick, as just minutes later, the Pioneers scored again to claim a 2-1 victory.

Against Marquette on Monday, the ‘Cats once again fell behind, this time 2-0. Once again, it was Jeffry Hopson from the spot that got Northwestern back in it, and with Marquette down to 10-men, it looked as though the Wildcats might steal a point. However, it was not to be, as the Golden Eagles scored twice late to take a 4-1 win.

The pair of losses puts Northwestern just 1-3 on the year. Interestingly enough, through 4 matches, the Wildcats have yet to score from open play, scoring all 4 goals from the penalty spot, one in each match. If the ‘Cats hope to bounce back come Big Ten play, they’ll need to start manufacturing goals from the run of play, as sooner or later the spot will dry up.

Northwestern will open Big Ten play Friday against Ohio State, before returning home to host Wisconsin next Wednesday, in a game that can be heard on WNUR.