Posted on September 17, 2016 by Austin Miller Leave a comment 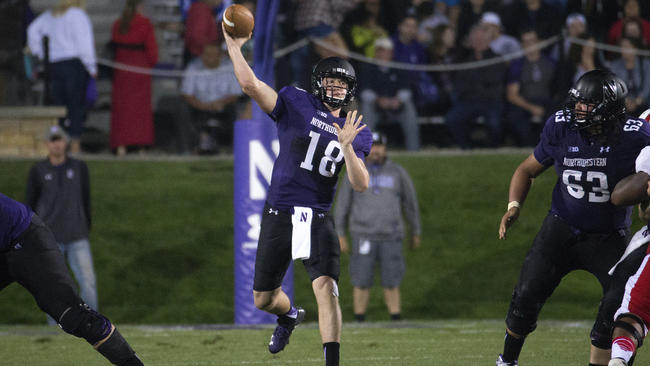 Badly needing a win after a rough start to the 2016 season, Northwestern got just that on Saturday night.

Things started well enough for the Wildcats, who went straight down the field on their first drive, with Clayton Thorson finding Garett Dickerson from 26 yards out to put the ‘Cats ahead 7-0. However, neither side could create much offense following that, with the teams trading drives that stalled out around midfield. Finally, as the game neared halftime, Duke drove 99 yards (some of the best drives do start inside your own 5 yard line), finishing off their scoring drive with Jela Duncan punching home from 4 yards out to knot the score at 7. Northwestern had a chance to retake the lead before halftime, but Jack Mitchell missed two field goals, first from 49 yards, then, after a penalty, from 34 yards out.

Northwestern went ahead for good when Thorson zipped a bullet right down the middle for Solomon Vault, who scored from 43 yards out to give the Wildcats a 14-7 lead in the third quarter.

Following the Northwestern touchdown, the team’s traded 3 & outs until Thorson found Macan Wilson to bring the ‘Cats into field goal range, where Jack Mitchell converted from 40 yards out to extend the Wildcat lead to 17-7. Duke had a chance to cut into the Northwestern lead early on in the 4th quarter, but kicker AJ Reed pushed a 33-yard field goal wide right. Northwestern went on to seal the win when Thorson found Austin Carr from distance to give the ‘Cats a 24-7 lead. Shaun Wilson found the end zone late on for Duke, but it was only good for window dressing on the final score.

It wasn’t a particularly pretty game from Northwestern, but it was a win, which this team badly needed. Clayton Thorson had trouble dealing with the pressure Duke brought, but made a few nice throws, including on the trio of touchdowns, and finished with a career high in passing yards, despite a couple of poor decisions that resulted in interceptions or sacks. Northwestern’s secondary was weak at points, especially in the 5-15 yard range, but Duke seemed unable (or unwilling) to take advantage of this in the second half, while the front 7 controlled the line of scrimmage well to prevent Duke from establishing a run game.

Justin Jackson struggled to find space, but finished with a workman-like 94 yards on 28 carries, doing just enough to keep the Duke defense honest and give Thorson space to work.

Now, with a win under their belt, Northwestern enters Big Ten play, where the going won’t get any easier. The Wildcats open up with a Nebraska team next Saturday night that’s now 3-0 and among the favorites in the Big Ten west, before heading to their first hostile environment of the year in Iowa City on October 1st.

While this win might stabilize the ship, the waters will only get rougher over the coming weeks. If Northwestern still harbors aspirations of contending in the Big Ten west, the Wildcats will need to open conference play with a bang against the Huskers. If they can’t, it could still be a struggle for the ‘Cats to go bowling.

No doubt, Pat Fitzgerald and company will be happy with tonight’s win, and rightfully show, it was hard fought. But as I’m sure Fitzgerald would tell you, it also shows that this team has a long way to go if it hopes to challenge for a division title.