Can Northwestern repeat their week 3 performance?

Posted on September 20, 2016 by Matt McHugh Leave a comment 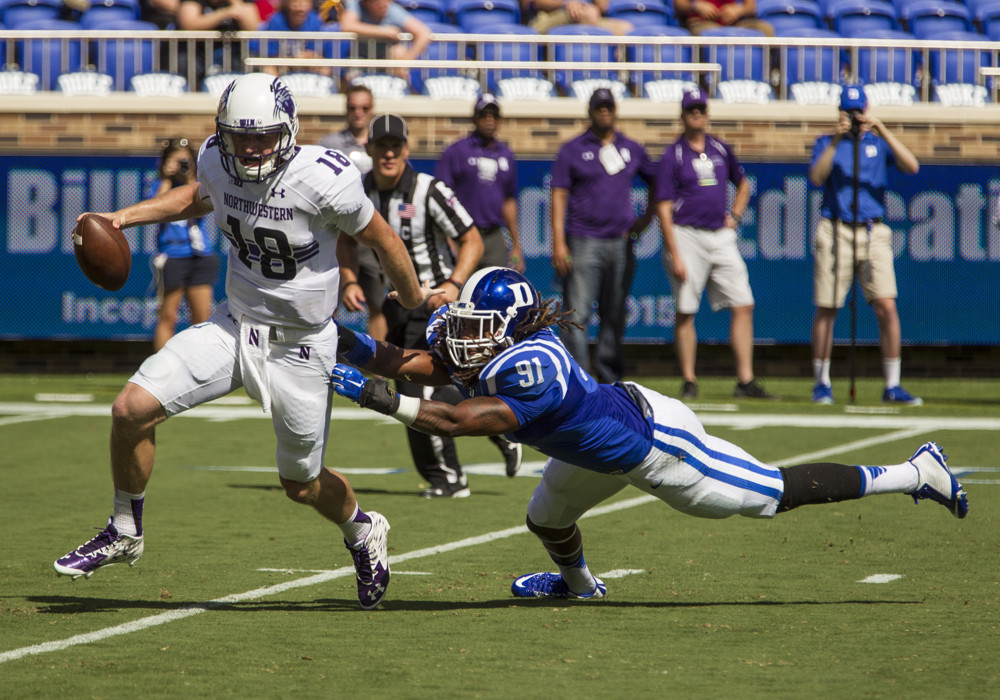 After a disappointing 0-2 start to the season, the Wildcats finally broke out last Saturday night with a 24-13 win over Duke. The trademark defense was very strong, despite most of the secondary being injured, and the passing offense exploded for 320 yards through the air.

All of that is great, but the quality of their opponent needs to be factored in as well. Duke is…not good, to put it lightly. This was a game Northwestern should have won, and the fact that they did so in a relatively dominant fashion is encouraging. But now it begs the question: was last week a fluke, or are they figuring things out?

The breakout of the passing game was the most encouraging part, as redshirt sophomore quarterback Clayton Thorson threw for a career high 320 yards and 3 touchdowns. Last year, Thorson primarily relied on short passes, but against Duke he averaged 8.2 yards per attempt and took more shots downfield.

Many of those shots downfield involved senior wide receiver Austin Carr, who had a career-high 135 receiving yards. Carr was a regular receiver for Thorson last season, and the duo seemed to click in the first two games of this season as well. Carr caught five passes for 73 yards in week one and 7 passes for 73 yards in week two. Thorson didn’t have a true no. 1 receiver option last season, and Carr looks like that guy this year.

However, Thorson struggled with incompletions yet again last week, completing just 18 of his 39 pass attempts. Thorson’s completion percentage is now 49 percent for the season, slightly worse than his 51 percent mark last year. A lot of those incompletions were due to pressure in the pocket, and the offensive line’s ability to pass block has been a concern all year.

Also the schedule will get a lot tougher for the ‘Cats as they head into conference play. They have road games against Iowa, Michigan State and Ohio State coming up, as well as hosting ranked teams Nebraska and Wisconsin. There will be little to no room for mistakes against those teams, and this team is still very mistake-prone.

On the offensive side of the ball, I’d be surprised to see another 300+ yard performance from Thorson and the passing game, but I think his connection with Carr is encouraging. All the ‘Cats need is to be taken seriously as a threat through the air, and it really opens the playbook for future games.

On defense, the ‘Cats did some things well, but struggled at points too. They forced seven punts and two turnovers, but allowed two long touchdown drives and 396 yards of total offense. Considering that the defense consisted of multiple first time starters playing together for the first time, that’s not bad at all, but again the Duke offense isn’t exactly the most difficult test.

The ‘Cats did a good job stopping the run, holding Duke to 3.4 yards per carry, but the patchwork pass defense struggled against backup quarterback Daniel Jones, allowing 279 yards through the air. That’s going to have to change as the competition gets tougher next week.

Overall, there were definitely some encouraging signs from last week’s win, but there is still a ways to go for the ‘Cats to be competitive against the top teams in the Big Ten.