WNUR Predictions: Northwestern vs. No. 20 Nebraska

After picking up their first win of the season against Duke last week, the Northwestern Wildcats open Big Ten play against the No. 20 Nebraska Cornhuskers under the lights at Ryan Field Saturday night. WNUR Sports’ coverage begins at 5:30 CST with the pregame show followed by the opening kickoff at 6:30 CST at Ryan Field

Here’s how our broadcasters thing the Wildcats will fare against Nebraska:

Northwestern showed some mettle last week against Duke and picked up a much-needed win. Nebraska, though, is a different animal. I think the Huskers pull away in the fourth quarter.
Player to Watch: Tommy Armstrong Jr., QB, Nebraska. Armstrong can sling it and has good mobility for a quarterback. The Wildcats’ front seven and secondary need to be ready to play.
Matt McHugh (@mattmcsports27): Nebraska 24, Northwestern 19.
The ‘Cats make this game a little closer by taking advantage of a beat-up Nebraska secondary, but don’t have quite enough to pull in front.
Player to Watch: Montre Hartage, CB, Northwestern. Hartage played a strong second half after a rough start against Duke last week. Will the real Montre Hartage please stand up?
Ari Ross (@aross50): Nebraska 23, Northwestern 13
Northwestern will keep this game close, but unless the ‘Cats defensive line can put consistent pressure on Tommy Armstrong Jr., Nebraska will pull away late with a couple of scores.
Player to Watch: Xavier Washington, DE, Northwestern. If Washington, along with the rest of the ‘Cats defensive line, can put pressure on Armstrong, they could force him into a mistake or two that could change the outcome of the game.
Lorenzo Gudino (@LorenZo_Gudino): Nebraska 28, Northwestern 10
Coming off last week’s win, Northwestern will carry over some offensive mojo. Unfortunately, Nebraska will be too much to handle on both sides of the ball.
Player(s) to Watch : Northwestern Defensive Squad. Nebraska implements a ton of motion offense, especially with their I-Backs. Nebraska used this strategy well in their win over Oregon. Will Northwestern’s D adjust in this instances or will Nebraska inflict the same damage they served to the Ducks?
Josh Burton (@josh_burton1): Nebraska 20, Northwestern 13

It was nice for the Wildcats to finally get a win, especially against a (admittedly banged-up) Power Five team in Duke, but Northwestern gets no respite with the start of Big Ten play. Nebraska took down Oregon last week, and is now firmly in the Top 25, thanks to the play of its offense led by quarterback Tommy Armstrong Jr. I think the Wildcats will have trouble with Mike Riley’s dual-threat signal-caller and that will be enough for a narrow Cornhusker win.

Player to Watch: Tommy Armstrong Jr., Quarterback, Nebraska. This might be an obvious choice, but Armstrong is the Cornhuskers’ best offensive playmaker and considering he has significantly improved his decision-making (but cutting down on interceptions), he’s a real dangerous weapon. Considering Northwestern’s injury concerns in the secondary, Armstrong might have a big game on Saturday.
Sam Brief (@sambrief): Nebraska 31, Northwestern 17
Nebraska is a legit team, and beating Oregon last week cemented just that. Northwestern’s defense has struggled against mobile quarterbacks, so I expect Tommy Armstrong to have a field day. Thorson & Co. won’t keep up, and the Wildcats fall by 14.
Player to Watch: Anthony Walker, LB, Northwestern. Against the shifty Armstrong, it’ll be on Walker’s shoulders to contain him. Now starting to regain his health, Northwestern needs Walker to return to All-American form.
Amit Mallik (@upper90shot): Northwestern 24, Nebraska 19
The ‘Cats grind out a tough early conference victory behind a dominant run game, and a defense up to the task.
Player to Watch: Godwin Igwebuike, S, Northwestern. Against a pass-happy Nebraska offense, Igwebuike and the injury-plagued secondary must turn in their best performance of the season. Igwebuike registered a pick after a premonition last week – can he find another one on Saturday?

I’m not convinced Nebraska is quite as good as their upset win over Oregon might indicate they are, but I am convinced that Northwestern isn’t quite as good as Nebraska.
Player(s) to Watch: The Northwestern defensive line. Tommy Armstrong is a real dual-threat quarterback, and part of the reason Northwestern defeated Nebraska last year was that the Wildcats held Armstrong to just 13 yards rushing (but 291 yards passing). Armstrong rushed for 95 yards last week against Oregon, adding in an even 200 passing yards. If he is able to have anything close to that kind of success against the Wildcats, it will be a long night. Stopping him starts with the defensive line, which has a much tougher matchup with Armstrong than they did against Duke’s Daniel Jones.
Ari Levin (@LevinAri): Nebraska 31, Northwestern 10
Nebraska has gotten the season off to a scorching start, and found themselves in the AP Top 25.  Something that cannot be said of Northwestern.
Player(s) to Watch: Northwestern’s Secondary. This group is clearly not the same as last year’s Sky Team.  And without Matthew Harris, they need to make a big step forward to slow down Tommy Armstrong Jr. and Nebraska’s passing game for this game to be competitive.
Adam Braunstein (@braunstein_adam): Nebraska 35, Northwestern 24
It appears as though the ‘Cats offense found a better strategy last week against Duke, so I’m expecting another respectable performance this week. However, all the injuries in the secondary will likely hurt NU this week, as they look to stop senior QB Tommy Armstrong Jr. For the second straight year, I expect a high scoring game between these two squads, but this time with the Cornhuskers coming out up top.
Player to watch: Devine Ozigbo, RB, Nebraska. Tommy Armstong is going to do his thing, that is pretty close to a guarantee. This means that if Northwestern wants to remain i striking distance, they have to limit what the Cornhuskers do on the ground, and that starts with Ozigbo.

Time for the real NU to stand up.
Player To Watch: Lil’ Red, Mascot, Nebraska. Brb trying to avoid the scariest demonspawn creature this side of Purdue Pete. 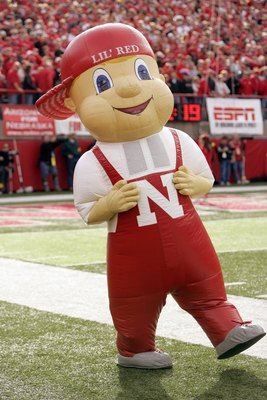 seriously. Look at this guy. He is absolutely the worst, and it is not particularly close. Please go away Lil’ Red and never come back.