Posted on September 25, 2016 by WNUR Sports Leave a comment 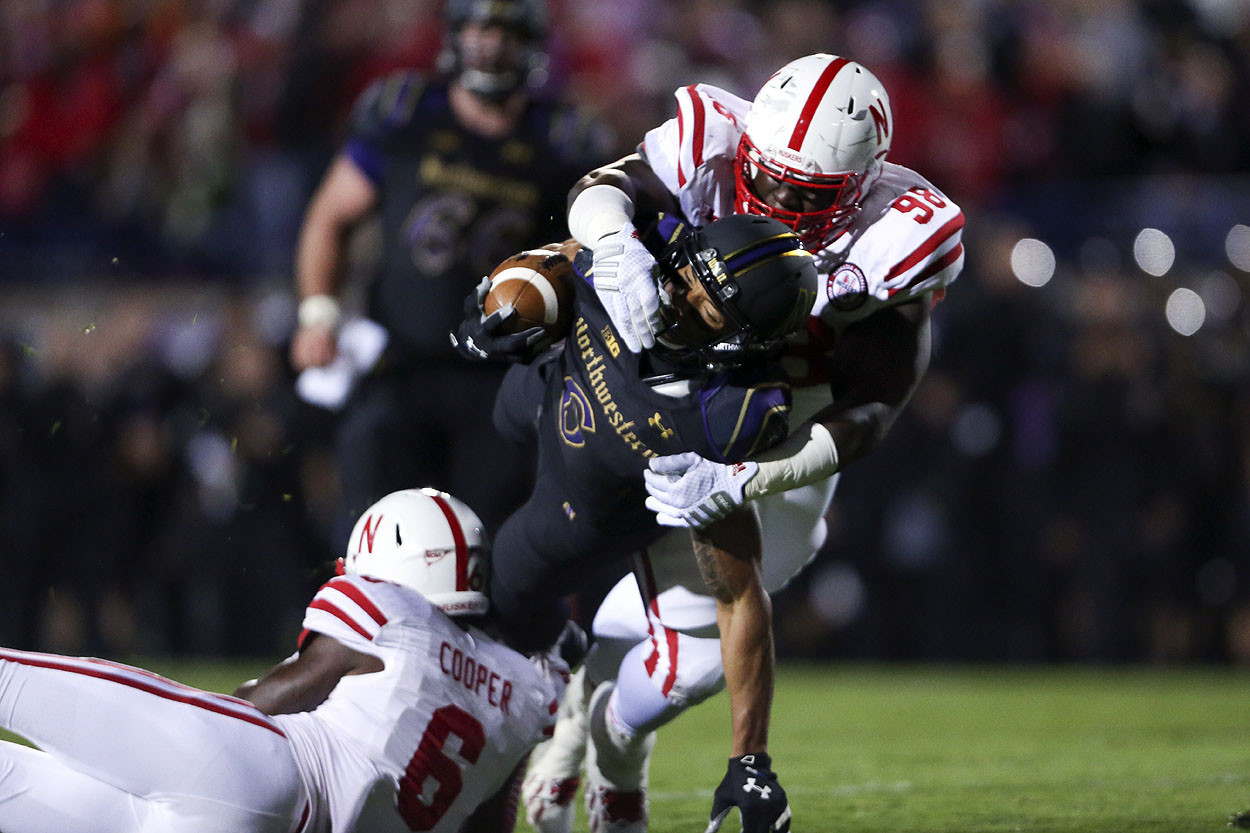 The Nebraska Cornhuskers came into Ryan Field on Saturday and put up 24 points on the Northwestern Wildcats.

It could have been a lot more.

556 total yards of offense, 310 of which came on the ground, was more than enough to compel the #20 Cornhuskers to a perfect 4-0 start to their campaign with a 24-13 victory in their Big Ten Conference opener. The Wildcats, meanwhile, failed to capitalize on Cornhusker turnovers and mistakes while making too many of their own, dropping their record to a disappointing 1-3.

Bolstered by a huge presence of red-clad fans, Nebraska nearly landed a killer blow on its opening drive. Starting with the ball from their 20, they were in the end zone just three plays later.

Or so it appeared.

Running back Terrell Newby broke out a 49-yard rush all the way to paydirt, but as he was diving for the goal line, he dropped the ball. It rolled out the side of the endzone for a touchback, and just like that, Nebraska went from being up 6-0 to having to play defense tied at zero. Galvanized, the Northwestern offense raced onto the field. The ensuing drive ended in a punt.

Jack Mitchell missed a 27-yard field goal attempt late in the first quarter and Drew Brown made one from 23 early in the second to give the Huskers the first points of the match. But Northwestern responded nicely two drives later when quarterback Clayton Thorson saw a hole and exploited it, scampering 42 yards for a touchdown. Mitchell made the PAT and Northwestern had themselves a 7-3 lead with 9:09 left in the first half.

On their next possession, the Huskers found themselves on the goal line. But running back Devine Ozigbo found himself in the arms of safety Godwin Igwebuike, who knocked the ball free. Linebacker Joe Jones saw the loose change and dove on it in the endzone, the second Nebraska turnover of the contest. Galvanized, the Northwestern offense raced onto the field. The ensuing drive ended in a punt.

“Any time you get a fumble recovery at the one [yard line] or a touchback on a touchdown, you kinda feel good about yourself, don’t you?” Fitzgerald said, chuckling more out of frustration than of bemusement. “You kinda feel like this is going to be our night.”

But it was not to be.

Northwestern recovered the ball and punted it away, starting Nebraska off right at midfield. Two plays later, they were in the end zone, with Newby holding onto the ball this time for a four-yard score and a 10-7 lead. On their next drive, the Wildcats marched down the field, but instead of having Mitchell attempt a 40-yard field goal, Northwestern opted to run a trick play on fourth-and-seven where Mitchell ultimately passed to holder Matt Micucci. It didn’t work, and Northwestern headed into halftime down 10-7.

If the first half was about Northwestern failing to take advantage of Nebraska mistakes, the second half was about them making some of their own. On his first drive of the half, Thorson threw a pick in the endzone to Aaron Williams, and the Huskers responded with an 80-yard drive that ended in a four-yard touchdown pass from Tommy Armstrong, Jr. to Cethan Carter.

The offense was just getting started. Bolstered by a nice kick return from Flynn Nagel compounded by a penalty, Northwestern got a touchdown of their own when Thorson hit Austin Carr over the middle for a 24-yard score. Mitchell missed the PAT however, keeping the score at 17-13.

Nebraska then punched right back, gashing the Northwestern defense with 57 rushing yards on one drive, capped by a 10-yard rush by wideout Jordan Westerkamp. A successful PAT by Brown made the score 24-13, and that is how it would end.

Still down 11 with under four minutes to play in the game, the Wildcats started marching down the field before Thorson was sacked on third down on the Nebraska 27. Needing two scores, the Wildcats went for it, and Thorson was intercepted by Josh Kalu, all but sealing the win for the Huskers.

It’s tough to win when you allow 556 yards of total offense. Armstrong, the only active Division I quarterback with both 7,000 yards passing and 1,000 yards rushing, added quite a few to both categories with 246 passing yards and a whopping 132 on the ground. Carr shone once again for the Wildcats, picking up 109 receiving yards on eight catches.

It was a disappointing loss for the Wildcats, to be sure, and they’ll need to fix a lot of things before their first road game of the season against reigning Big Ten West champions Iowa. And a clearly frustrated Fitzgerald made no bones about it: things are going to change. After another disappointing evening from Mitchell, Fitzgerald called the kicking job “wide open” and said that there are many things to fix before his team heads out to face a solid team in Iowa City in less than seven days.

“You are what your record says it is,” Fitzgerald said. “And it’s not very good.”