Posted on September 29, 2016 by Jason Dorow Leave a comment 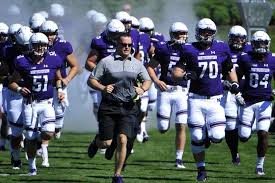 Coming off a 24-13 loss at the hands of the now 15th-ranked Nebraska Cornhuskers, the Northwestern Wildcats are facing no slouch in week two of Big Ten play. The Iowa Hawkeyes sit at 3-1 with victories over Miami (OH), Iowa State and Rutgers, and they possess a stout defense allowing fewer than 14 points per game. While Las Vegas is spotting the Hawkeyes almost two touchdowns Saturday, these two teams match up quite evenly on paper.

Northwestern Offense vs. Iowa Defense: No team has really cracked the Hawkeye defense yet this season. North Dakota State put up 23 points in their two-point victory at Kinnick Stadium two weeks ago, but they averaged just 6.5 yards per pass. The Hawkeyes have outscored opponents 35-7 in the points off turnovers department as well behind two interceptions and four fumble recoveries. A trio of junior linebackers in Josey Jewell, Bo Bower and Ben Niemann leads the team in tackling. Plus the defensive line, which has a great mix of youth and experience, has racked up 13 sacks already this season. Unless the NU offensive line makes huge strides this week, the Wildcats won’t be able to pound the rock with Justin Jackson. It will be on Clayton Thorson to protect the football and create several big plays through the air, like the Wildcats did against Duke.

As much as Northwestern fans would like to see the Wildcats putting more points on the board, the Hawkeye faithful is itching just as much for advances in the Iowa offense. Despite escaping Piscataway with a win last Saturday, the Hawkeyes scored just 14 points and were outgained for the second consecutive week. Senior quarterback C.J. Beathard completed 12 of 23 passes for a measly 162 yards. Running backs Akrum Wadley and Leshun Daniels Jr. both had decent games, but against a stronger NDSU Bison defense the duo combined for only 49 yards on 18 carries. All that said, Nebraska ran wild against the Wildcats last weekend with 310 rushing yards and 6.6 yards per carry. A lack of size at defensive end helped the Husker O-line bully NU’s defensive front, and Iowa has another massive group of blockers for NU to deal with. The Wildcats will need to stack the box and hope their young cornerbacks step up against a second-rate Hawkeye wide receiving corps.

Special Teams: The big question is who will be kicking for Northwestern? Pat Fitzgerald said it’s an open battle between Jack Mitchell, who is 1-for-4 on FG attempts this season, and Matt Micucci for the spot. In what is bound to be a low-scoring affair, neither team can afford to leave points on the board. Both sides should have an eye on the return game as well. Wildcats fans know how lethal Solomon Vault can be in the open field and Flynn Nagel has proven his worth on punt returns, but Desmond King might be even more explosive. The senior defensive back handles kicks and punts for the Hawkeyes and is averaging 30.0 yards per kick return.

Intangibles: Playing at Kinnick Stadium is never a pleasant experience for the road team. The players are packed in like sardines on an incredibly slim sideline. You can’t even go back to the Gatorade jug without having one of 70,000 screaming Iowans within arm’s reach of you. And the players only leave the field to go back to a pink locker room at halftime. Sitting at 1-3 and having lost their last two games against the Hawkeyes by 30+ points though, the Wildcats should have a fire lit underneath them.

Prediction: Northwestern 17, Iowa 13. The Wildcats will pull one significant upset this season. And this will be it.