Posted on November 12, 2016 by Michael Stern Leave a comment 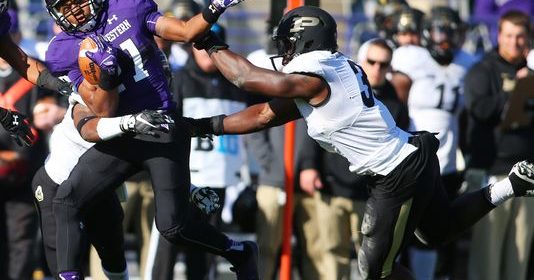 It’s been an up and down season for the Wildcats, who went 1-3 in September, 3-1 in October, and lost their first game of November last week to Wisconsin. Despite all the ups and downs, the Wildcats have a real shot to reach a second straight bowl, with three winnable games to close out the season starting Saturday at 3-6 Purdue.

The Boilermakers have two wins against FBS competition this season, and one of them came in overtime against Illinois. Head coach Darrel Hazell was fired after the team’s October 15 loss to Iowa, and Purdue has played better under 35-year-old interim head coach Gerad Parker (they have yet to trail at the half under Parker, but have still lost all three games with him in charge).

Purdue has also dealt with a number of injuries on both sides of the ball. Three cornerbacks have missed time, as well as two defensive linemen including preseason all-conference selection Jake Replogle. The defensive line injuries have led to playing time for Lorenzo Neal Jr. (son of former NFL fullback Lorenzo Neal), but also explain why the Boilermakers have struggled so much on that side of the ball.

Offensively, four different Boilermakers have started at left tackle, and it’s been hard for last year’s star freshman Markell Jones to find holes in the running game. Second-leading receiver Dominique Young has missed the last four games with an injury, but if Purdue is able to stay with Northwestern, it will be thanks to explosive plays through the air.

Boilermaker quarterback David Blough leads the Big Ten in passing yards per game and threw four touchdown passes in the first half last week against Minnesota. The Boilermakers have completed 95 passes for at least ten yards, second-most in the Big Ten, while DeAngelo Yancey has caught a touchdown of 50 yards or longer in four consecutive games.

In order for the ‘Cats to leave West Lafayette victorious, the injury-depleted Northwestern secondary must prevent the Boilermakers from connecting on any deep shots down the field, and the Wildcat offense must use a balanced attack, controlling the line of scrimmage and the time of possession.