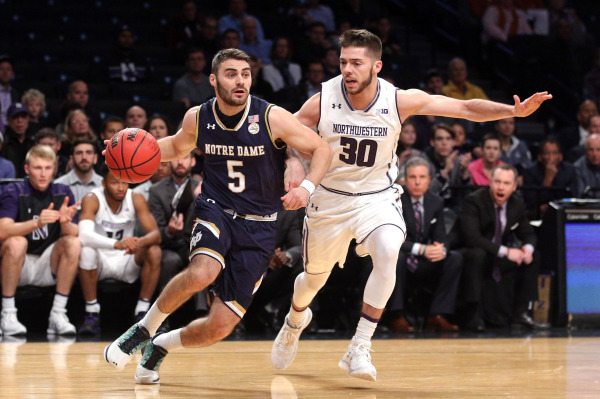 BROOKLYN, N.Y. — Northwestern had a chance to flip the script.

Notre Dame and Northwestern were trading blows in the Legends Classic championship game on Tuesday night. The Wildcats, much-maligned for not being able to finish close games over the years, were poised to finally break through and pull off a no-frills, hard-fought, resume-building win against a good team in a game’s final moments.

After struggling mightily from the field for much of the game, Bryant McIntosh converted a clutch layup with 45 seconds left to give Northwestern a 66-65 lead. Then the defense got a stop and grabbed the rebound. It was setting up to be Northwestern’s night after just a few fouls and free throws.

Down two with a final gasp to tie the score or take the lead, McIntosh’s contested floater was off the mark. And then it was over.

The familiar sinking feeling returned for Northwestern fans and players. The ‘Cats walked off the court at Barclays Center in disbelief. Another one got away.

Is this the year? That’s usually the question with Northwestern basketball. Usually, it refers to the team making its first-ever NCAA Tournament.

But this time, the Wildcats must ask themselves if this is the year that they can finally win those close games against quality opponents. There’s still plenty of basketball to be played, but with Tuesday’s collapse against the Irish and last week’s gut-wrenching loss to Butler, they’re already 0-2 in that regard.

Last year it was a blown lead and overtime loss at No. 4 Maryland that stung like this. The year before, it was a tough overtime loss at Michigan State. Too many times the ‘Cats have left games wondering what could have been if just one or two more plays had gone their way.

Taphorn made a critical error on Tuesday night, but the blame can’t be squarely on his shoulders. Head coach Chris Collins acknowledged after the game that he should have used a timeout during that sequence. The offense went cold after taking a late lead, and the defense couldn’t stop Farrell when it mattered most.

This Northwestern team is good. The Wildcats know they’re good. That makes searching for answers after a frustrating finish even more difficult.

“It wasn’t anything special [Notre Dame] did, or anything we did wrong,” redshirt sophomore Vic Law said when asked how Northwestern’s fortunes changed so quickly. “Just the flow of the game.”

Teams like Notre Dame are used to that flow, used to performing under pressure. Experience in close games was the prevailing theme in the postgame press conference.

“We’ve been in that position before,” Notre Dame senior Steve Vasturia said. “We all just kind of took a deep breath and said, ‘We’ve been here before.’ They made their run and we just had to come back, and we did a good job of that.”

“I think our experience of this nucleus of being in big games, tough games, and having to finish, there’s a group of guys out there that have done that a bunch,” he said. “And we certainly had to draw on all of that to escape.

“We’ve been in a lot of game situations. We’re probably a little older [than Northwestern], and that helped us tonight.”

That’s where Northwestern hopes to be as a program soon, and Collins admitted as much.

“That’s what experience, especially in college, that’s where it comes in,” Collins said, crediting Notre Dame. “That’s what we’re trying to get.”

Northwestern can still have a successful, even historic season in 2016. Texas isn’t a finished product, but the Longhorns are still a talented, athletic bunch that the Wildcats beat handedly on Monday night. Sticking with Notre Dame and Butler until the final buzzer is nothing to be ashamed of, either.

That could be the last step separating Northwestern from that elusive tournament berth.

“No one is going to give us anything… but that’s ok we will claw our way there,” it reads.

Law and the ‘Cats will get their chance to do exactly that. Conference play begins in just over a month.

A few clutch wins in January and February could make it easy to forget a tough loss in November. Only then can Northwestern fans start thinking about March.