Did You Know? Pitt Edition

Posted on December 27, 2016 by Michael Stern Leave a comment 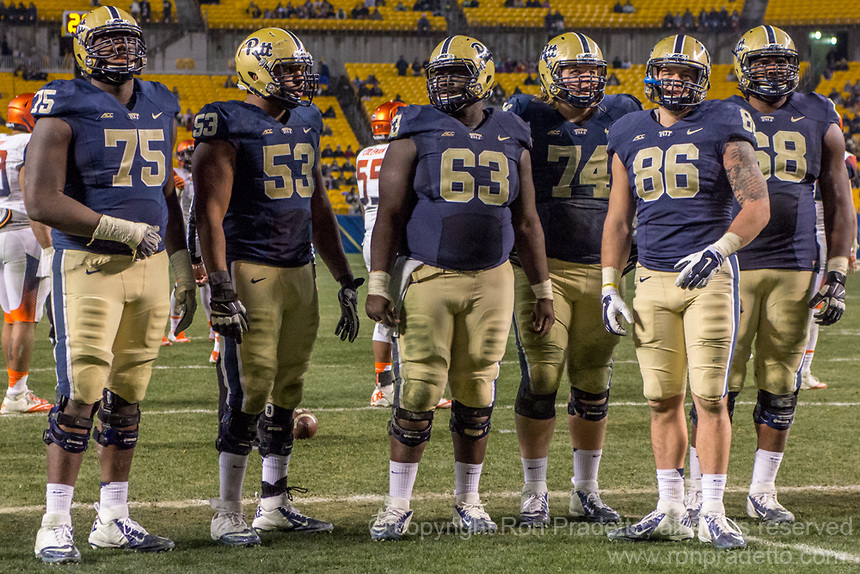 One of the keys to Pitt’s success this season? Their offensive line, one of the biggest (and best) in college football.

The Wildcats will face the Pitt Panthers tomorrow at Yankee Stadium in the Pinstripe Bowl, but who exactly are the Panthers? How did Pitt’s season go, who are their star players, and do these the Wildcats and Panthers have any shared history?

Did you know the Panthers are the only team in the FBS with wins over two of the top five teams in the final College Football Playoff rankings?

Pitt’s 8-4 regular season was highlighted by an early-season win over Penn State that might have kept the Lions out of the CFP and a stunning late-season upset of Clemson in Death Valley. A couple common themes in these two games explain Pitt’s success throughout 2016. First, the Panther defensive line, led by all-conference selection Ejuan Price (21 of his 42 tackles went for loss) slowed both top-five teams’ rushing attacks. Clemson gained 50 yards on the ground against Pitt, the Tigers’ lowest output of the season, while Penn State only ran for less than the 77 yards they managed against Pitt on two occasions, against top-ten foes Michigan and Wisconsin. Second, Pitt’s offensive line did not allow much penetration from either Clemson or Penn State. The Panthers’ 341 rushing yards against Penn State are the most the Lions gave up in a single game all season, while Clemson only allowed more rushing yards to conference top dogs Louisville and Florida State than they did to Pitt. Clemson averages 3.5 sacks per game, second in the nation, but brought down Panther quarterback Nathan Peterman only twice, while Penn State was held without a sack despite ranking 11th in the country averaging 3 per game. When the Panthers control the lines of scrimmage, they are capable of beating (and have beaten) top-five teams.

Did you know the Panther offensive line has allowed only NINE sacks ALL SEASON?

If nine sacks doesn’t seem like that many, that’s because it isn’t. Only two teams in all of the FBS (Texas State and East Carolina) recorded nine sacks or less defensively. The Air Force Academy allowed 13 sacks and THEY RUN A TRIPLE OPTION. What makes the Panther line so good? Size and experience. All five starters weigh at least 300 pounds and have started the first 12 games of the season as a unit. Left guard Dorian Johnson has a 39-start streak and is an All-American, left tackle Adam Bisnowaty has made 42 straight starts and was named all-conference, and right tackle Brian O’Neill was an all-conference selection as a sophomore while scoring two touchdowns, one on a backwards screen pass and one on an end-around. All-conference running back James Conner is a tremendous player, but this Panther offensive line is a huge reason why the Panthers have scored 43 touchdowns in 52 red zone trips. Conner is one of eight Panthers to score rushing touchdowns this season, compared to only three Northwestern Wildcats.

Did you know that only one team allowed more passing yards per game than Pitt?

The Panthers’ 343 yards per game through the air ranked 127th out of 128 FBS teams, and injuries were one reason why. All-conference safety Jordan Whitehead hasn’t played since leaving the Clemson game early with an injury, cornerback Avonte Maddox missed three games (and two of Pitt’s four losses) after getting banged up in early October, and Maddox’s backup Phillipie Motley went down in week eight against Virginia Tech an hasn’t played since. Without Motley or Maddox opposite Ryan Lewis, the Panthers suffered their only double-digit loss of the year against Miami, as Dane Jackson made his first start and Damar Hamlin saw his first action after getting his redshirt burned. Motley and Maddox both also missed the Panther’s scoreboard-burning 76-61 victory over Syracuse, so it’s fair to say that at least some of the Panthers’ secondary struggles are due to injuries. That said, if the Wildcats want to pick up a Pinstripe Bowl victory, they’ll have to match Pitt score for score, and the Panthers appear more vulnerable through the air. Expect a big day from Austin Carr matched up against Lewis, and perhaps even bigger days for the Cats’ secondary targets, especially if Maddox and Motley don’t play.