RECAP: NU knocks off Indiana On Emotional Day at Welsh-Ryan

Posted on January 14, 2017 by WNUR Sports Leave a comment 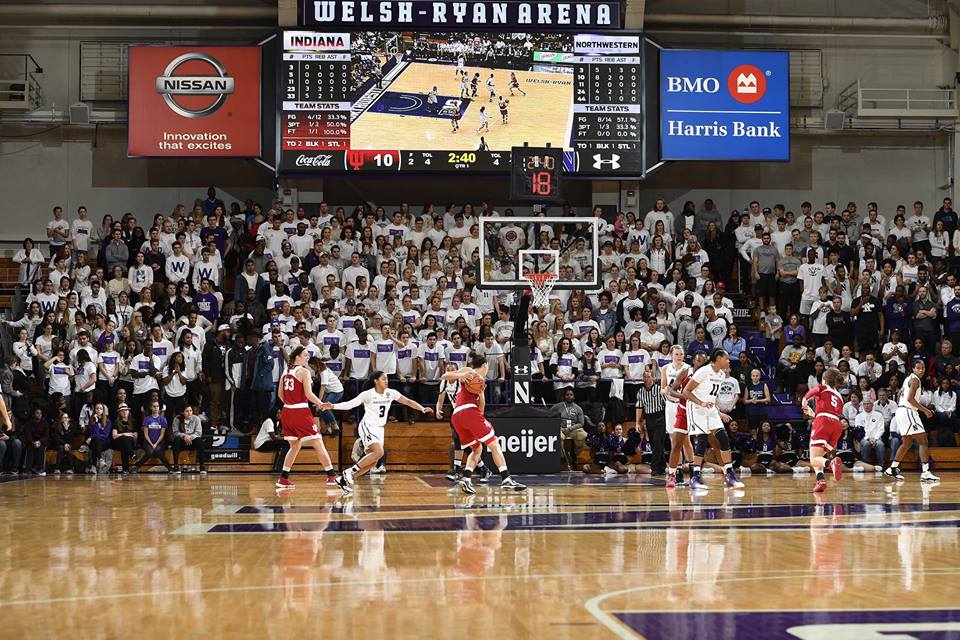 Welsh-Ryan Arena was filled to the brim on Saturday afternoon as students and fans alike congregated to rally around the Northwestern Wildcats women’s basketball team.

Urged on by a raucous crowd, the Wildcats built up a large lead in the first quarter and never looked back, taking down the Indiana Hoosiers by a score of 80-67.

The crowd was a wall of white, with many members of the student section proudly wearing shirts that read “Fly High J” with the number 5 on the back to commemorate the life of sophomore guard Jordan Hankins, who passed away earlier in the week. The Wildcats players and coaches also wore white warmup shirts with the number 5, as did their opponents on the afternoon, Indiana.

Nia Coffey led the way for the ‘Cats with 14 points, 14 rebounds and six assists. Meanwhile, Ashley Deary poured in 18 points and added eight assists of her own. Amber Jamison, wearing her close friend Hankins’ old jersey, had one of her best games of the season, scoring 13 points in only 17 minutes.

Indiana’s offensive inefficiency was its biggest weakness on the afternoon. Forward Amanda Cahill and guards Alexis Gassion and Tyra Buss combined for 41 points, but did so on just 12-of-50 shooting

Indiana started the game off with a 7-6 lead, but from there Northwestern stormed to a 23-12 lead at the end of the first quarter. Northwestern’s ‘big three’ of Nia Coffey, Ashley Deary, and Christen Inman combined for the team’s first 21 points. Deary closed the quarter by slicing through the Hoosiers defense and beating the buzzer with a lefty layup.

“We wanted to embody [Hankins’] spirit, her aggressiveness, her swagger,” Deary said of her clutch layup and emotional reaction.

A “Seven Nation Army” chant reverberated through Welsh-Ryan as the first quarter came to a close. With the support of the community behind them, it sure felt like nobody could hold the Wildcats back.

“I’m sure that the crowd played into the score tonight. That was probably worth 10 points,” said head coach Joe McKeown.

The second quarter was much less poetic. In a poor shooting display for both teams, Indiana managed a 14-4 run to pull back within three points of Northwestern, 29-26, with 2:25 left before the half. But a Jamison bucket and an emphatic Coffey rejection of Bre Wickware helped restore the lead to five for the ‘Cats at the half, 37-32.

The Hoosiers kept the game close throughout a back-and-forth third quarter. There were big plays by both teams, and Indiana even tied the game at 42-42 with 6:56 left in the quarter, but Northwestern went on to outlast the Hoosiers, scoring eight of the last 10 points in the quarter to extend the lead to 57-46.

The ‘Cats controlled the fourth quarter like they did most of the game. They finished with a 15-0 advantage in fast break points and a 44-28 domination of points in the paint. Indiana shot 32.4% from the field and only 26.9% from the three-point line. The stats spoke for themselves.

Ultimately, it was an important win emotionally and in the standings for Northwestern. The Wildcats now sit fifth place in the Big Ten standings at 3-2 in conference play. After an emotional week, the victory was much needed for coach McKeown and his team.

“I’m proud of this team and proud to be their coach. We’re really just trying to do our best with this, and that’s all you can really do,” said the Northwestern coach.

The Wildcats will be back in action for a big conference matchup against Michigan State on Tuesday at Welsh-Ryan Arena.