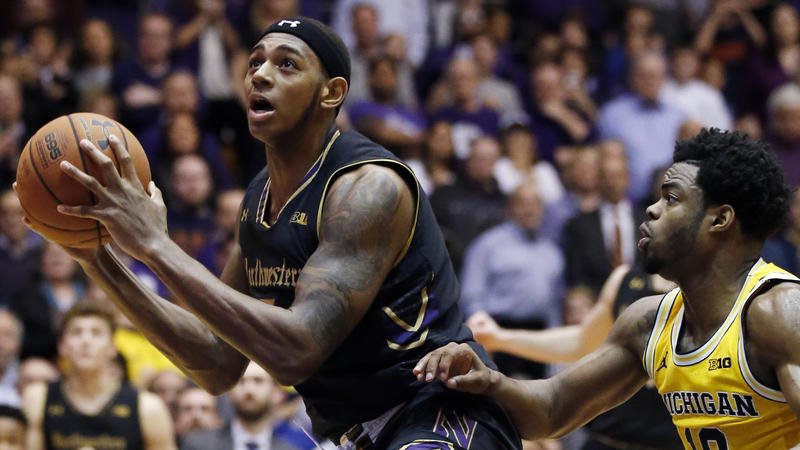 It took an absolutely perfect pass for Northwestern to finally exorcise its basketball demons.

The Wildcats got one.

No more heartbreak, no more “next year.” Wednesday’s wild win will almost certainly give the Wildcats (21-9, 10-7) their first NCAA Tournament berth in school history.

Taphorn’s perfect delivery to Pardon came with 1.7 seconds to go. Northwestern’s big man collected, converted and then ran down the court as his teammates mobbed him in celebration. Purple-clad students joyously streamed onto the floor to join in.

For the first time in program history, there was some meaningful madness in March.

“I didn’t know what to do [when the shot went in],” Wildcats head coach Chris Collins said. “It was almost surreal.”

The back-and-forth affair featured seven ties and eight lead changes, six of which came in the second half. Michigan’s Zak Irvin had a chance to bury the Wildcats with a late jumper–just as he did in Michigan’s 72-70 overtime win in last season’s Big Ten Tournament–but his three pointer misfired with seven seconds remaining.

Then Taphorn and Pardon worked their magic. According to Collins, the team had never practiced the inbounds play before.

“When I saw the ball coming out of Nate’s hands, I thought it was going out of bounds,” Pardon said. “Then, when I caught it, I realized the rim was right there.”

Pardon finished with nine points and a team-high eight rebounds for the Wildcats, whose 21st win of the season set a program record.  Vic Law bounced back with 18 points and five boards after scoring a total of 15 in the past three games.

“This is the game that I committed here for,” Law said. “When I committed to Northwestern, everyone said ‘there’s no culture there, why would you go there?’ I mean, how could you not be excited for this game.

“I think the best moment ever at Welsh-Ryan Arena.”

The Wolverines (19-11, 9-8) are also playing for a spot in the Big Dance, but were dealt a heartbreaking blow in Evanston. They finish the regular season Sunday night at Nebraska.

“Our kids are a bit devastated right now, because we fought so hard to stay in the game and get ahead in the game,” Michigan coach John Beilein said. “We gotta find the positives out of this game.”

Derrick Walton Jr. scored 12 of his 15 points in the second half, nailing three triples early to keep Michigan close. Irvin finished with 12 points, including a jumper that put Michigan ahead with 2:50 left and a layup that tied the game at 65 with 1:28 to go.

Beilein compared Pardon’s miraculous finish to Christian Laettner’s shot against Kentucky in 1992 that sent Duke to the Final Four. Collins said he felt like coach Jim Valvano at the end of the 1983 NCAA Championship game, running around looking for someone to hug.

It was an unforgettable ending to the penultimate game at Welsh-Ryan Arena before the venue’s major renovation project.

With the win on Wednesday, the Wildcats seemingly ensured they’ll be playing on a bigger stage in a couple of weeks.