Closing the ‘Dore: Northwestern Advances to Second Round of NCAA Tournament 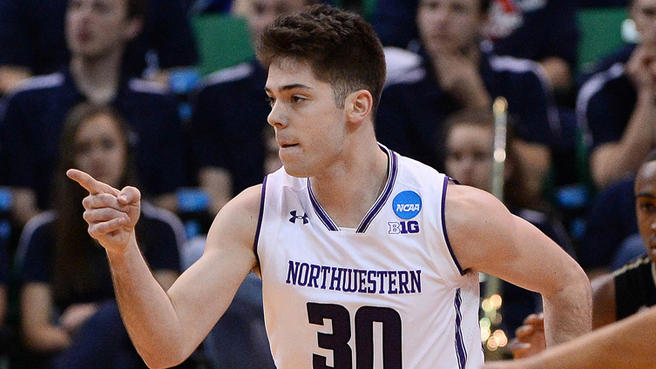 From the first Northwestern Men’s Basketball NCAA tournament appearance, to the most wins in program history, there’s no denying the talent in Evanston under Coach Chris Collins. But perhaps what is the most important and defining aspect of this team? It would have to be their ability to paint a pretty storyline.

Some will say 2016 produced several of the best moments in sport history. With Villanova’s Kris Jenkins draining a buzzer beater to beat North Carolina 77 – 74 in the national championship, Leicester City winning the English Premier League title at 5,000 – 1 odds, and the Warriors blowing a 3 – 1 lead in the NBA Finals, it’s hard to blame them, and who could forget the Cubbies? Though the calendar flipped to 2017, Northwestern joined this madness with its first NCAA tournament appearance in program history, and eventually its first win, defeating the Vanderbilt Commodores 68 – 66 on Thursday afternoon. Per Northwestern, the win would come in dramatic fashion, draining down to the last seconds.

With chants of “Go U, NU” breaking out during warm-ups in Salt Lake City, the Cats felt their dancing dreams turn into a home-court feel reality.

Bryant McIntosh was hot out of the gates, featuring the purple and white’s first NCAA tournament points, ever. He received assistance from Scottie Lindsey, who added 12 points in the first 20 minutes.

The fear heading into this game revolved around Luke Kornet. The First-Team All-SEC selection averaged 13.2 ppg, 6.2 rpg, and 2.0 bpg. In addition, he currently boasts the most made three pointers (148 going into Thursday) by a seven-footer (yes, this list also features Frank Kaminsky).

Vic Law entered the break with only one shot, no points. Gavin Skelly, Dererk Pardon, and McIntosh accumulated two fouls each in the opening half.

The second half was greeted with Cat cheers before the team was even back on the NCAA tournament floor. The following is a comparison we are proud to make (though previously thinking the grungy arena would never reach this level): the game truly felt like a home-court advantage, Welsh-Ryan experience.

The second 20 continued where the first started – with McIntosh. Captain, leader, and heart of the team, he conducted the offense with ease and put the ball in the bucket as if he had played in tournament games all his life.

The tide turned and the arena deafened after a missed Skelly free throw was rebounded and kicked out to Nathan Taphorn, who cold-bloodedly drained the three. The Northwestern bench, coaches, and fans were on their feet before he even released the rock.

But this is March, and things don’t always come easy in March.

What was once a 15-point NU lead was blown by a Vanderbilt run down the stretch. Vanderbilt’s Matthew Fisher-Davis got hot, nailing 14 of his 22 points in the second frame.

In pure Northwestern fashion, a costly mental error, mistake, lapse in judgment (call it what you will), combined with just the right bit of luck, helped the Cats claw their way out of a bind.

After Riley LaChance’s layup pushed the Commodores above the ‘Cats, Fisher-Davis inexplicably fouled McIntosh, sending the team’s best free-throw shooter to the line for free points with less than 20 seconds left.

What was he thinking? Coach Collins called it an “honest mistake” in the post game presser. McIntosh said he was confused and thought perhaps NU was actually leading by one, instead of trailing. Fisher-Davis took responsibility, stating:  “Saw Coach Drew point at my man, he was telling me my matchup, and I got it confused with the foul. That was it,” per ESPN.

Pardon went 6 – 6 from the charity stripe at a crucial time down the stretch. More free throws and missed Vanderbilt thre’s followed, ultimately ending in a chaotic rebound flying out-of-bounds by a Commodore.

With 1.4 seconds left to play, the Cats inbounded, and more history was made.

McIntosh led the Cats with 25 points, Pardon added 14 and 11 rebounds, with Lindsey rounding out the crew also with 14. Shooting 49% from the field, combined with 32 points in the paint, and the same, steady defense Coach Collins has installed in this group, created the final 68 – 66 win.

A historic run? A Cinderella story headed for the Elite Eight? Willie the Wildcat winning dance battles during media timeouts? I can only guarantee one of those things happening. But the truth is, it doesn’t matter. The Cats are headed in the right direction under Coach Collins and the media, attention, and pure belief in the system are the things the program needs to make it farther in the tournament, and to earn the respect of collegiate basketball.