Northwestern shows its mettle in NCAA Tournament victory over Vanderbilt 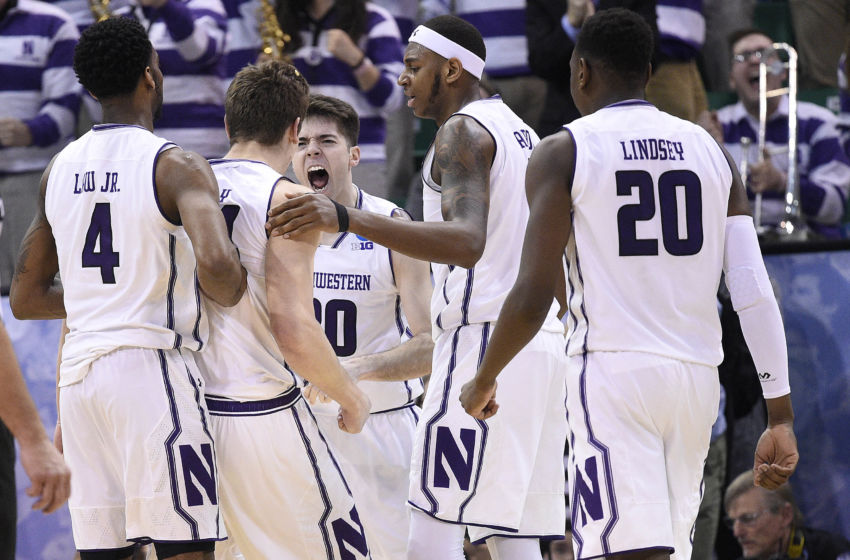 SALT LAKE CITY– After a frustrating late-game meltdown against Notre Dame in November, I wrote about Northwestern needing to learn how to win close games if it wanted to finally make it to the Big Dance.

The Wildcats did just that. They notched a big non-conference win over Dayton at the United Center. They shocked a top ten Wisconsin squad in Madison. They used a little magic to beat the buzzer and Michigan.

Now they’re here, and they’re not content with their first-ever NCAA Tournament appearance. On the biggest stage the program has ever seen, Northwestern won yet another close game.

After taking a 15-point lead and coasting through the game’s first 30 minutes, Northwestern buckled down and held on for a 68-66 victory over Vanderbilt in the first round of the NCAA Tournament. It was a game that Northwestern teams of old would have found a way to inexplicably lose. This year’s team has proven to be different.

“The Tournament is about one thing: trying to live to see another day,” said Northwestern head coach Chris Collins. “And fortunately, we were able to do that.”

Despite leading for 38:01 of game time, Northwestern had a chance to lose in heartbreaking fashion. Six of the game’s eight lead changes came in a frenzied final 1:36. Each time that Vanderbilt took the lead, the cool and composed Wildcats answered.

“In March, everything comes down to the last two minutes, it feels like,” said point guard Bryant McIntosh, who made the game’s deciding free throws. “Every team is good, every team is going to make a push.

McIntosh was the biggest reason why. Collins called him “the best player on the floor the whole game” after an inspired effort. The Wildcats’ brilliant floor general led the way with a game-high 25 points, slicing through the defense and sinking his patented floater seemingly anytime he wanted.

Those free throws came after Vanderbilt guard Matthew Fisher-Davis’ ill-advised intentional foul as McIntosh dribbled up the court and the Commodores led by one. But McIntosh still needed to handle the pressure of two big free throws in an arena clouded with tension and anxiety. Wildcat fans know well enough that Northwestern has been on the other side of such heart-breaking, late game gaffes several times in the team’s futility-fueled history.

It wasn’t only McIntosh that came through in the clutch. Ironically enough it was Northwestern’s worst free throw shooter, Dererk Pardon, that delivered at the charity stripe late in the game.

Pardon went six-for-eight at the line on Thursday, including a perfect six-for-six with the ‘Cats lead dwindling in the game’s final 4:06.

When asked after the game how he handled the big moment, Pardon talked about focus.

“I just tried to focus in,” Pardon said. “The last time out before my free throws, coach said, ‘It’s about toughness,’ that was in my head the whole time. And before one of my free throws he said, ‘I believe in you.’ And that gives you a lot of confidence.”

Collins compared the two players’ clutch efforts down the stretch.

“Bryant is a guy you want on the line,” Collins said. “He has ice water in his veins, and you know he’s going to make those. But Dererk being in that situation for the first time, really a big growing experience for him to step up there and make those free throws when we needed them.”

Thursday wasn’t Northwestern’s cleanest game of the year. The ‘Cats struggled with foul trouble and turnovers, which prevented them from blowing the game open in the second half. They let Vanderbilt hang around and benefitted from some timely Commodore misses.

But they did something that seemed improbable when the team was sliding only a few weeks ago: they won an NCAA Tournament game. The higher seed but a technical underdog, the Wildcats delivered under pressure Thursday just as they did throughout a season in which the weight of history was at its heaviest.

Collins called Thursday a “special day” for the team and program. It only transpired because Northwestern has learned how to play–and win–in crunch time.